The Sphynx is a hairless breed that originated in Canada and the United States in the 1960s. Some cats will have a peach-like fuzz, while others are completely hairless. The Sphynx cat can be prone to oily skin due to the lack of coat, which will require frequent baths.

Sphynx cats are outgoing, energetic, mischievous and have a love of high places. They retain their kitten-like personality well into adulthood. The Sphynx loves to be close to their human family and make a great pet around children. 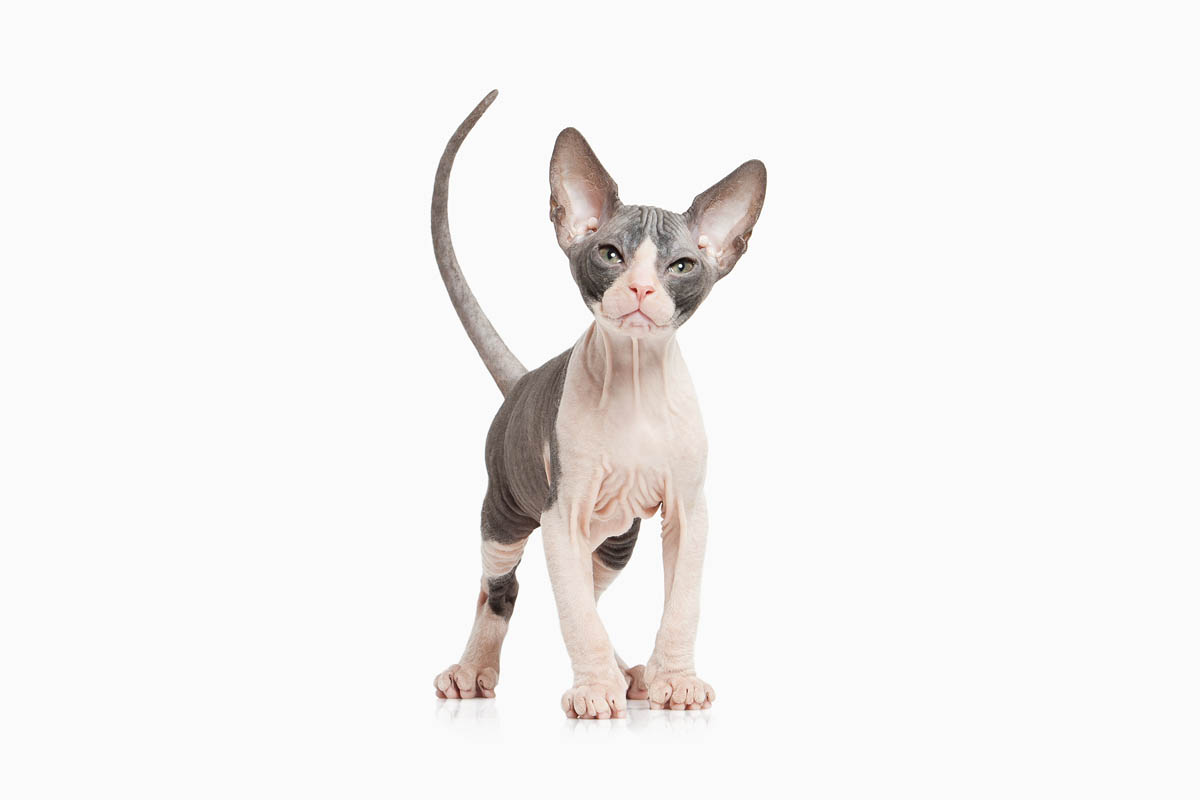 Also known as a Don Sphynx, the Donskoy is a hairless breed that originated in Russia in the 1980s. The coat of the Donskoy occurs in four types.

In 1994 Olga S. Mironova began work on establishing a new breed crossing the Donskoy with Oriental Shorthairs. The result is a hairless breed with the lithe appearance of the Oriental, this new breed was named the Peterbald.

Like the Sphynx, Donskoys can also benefit from a daily wipe over or a weekly bath to remove excess oil from the skin.

Friendly, affectionate, intelligent and social, the Donskoy thrives on human companionship. They get along well with other pets and children.

The Donskoy is less common than the Sphynx and it may be more difficult to find a breeder.

The Cornish Rex is a curly-coated cat who originated in Cornwall, England in 1950 when a stray cat gave birth to a litter of five kittens, one of whom had a curly coat. This kitten, named Kallibunker went on to become the founder of the Cornish Rex.

The normal cat coat is made up of down, awn and guard, however, the Cornish Rex only lacks the guard hairs, with the awn and down hairs giving the coat an incredibly soft feel.

Cornish Rex cats are an active, outgoing and friendly breed that likes to be a part of the family. An acrobatic breed, the Cornish Rex has a love of heights and many love to be carried on their human’s shoulders.

The origins of the Devon Rex are similar to that of the Cornish Rex when a stray tortie gave birth to a litter of kittens in Buckfast, Devon in 1960. One of the kittens had a curly coat similar to that of a stray who had been seen in the area but evaded attempts to capture him. The curly kitten named Kirlee was thought to carry the same genetic mutation as the Cornish Rex who had been discovered 10 years earlier. Test matings proved that this was not the case and the two genes were named: Gene 1 (Cornish Rex) and Gene 2 (Devon Rex).

Devon Rex cats are active, playful, loving, easygoing and mischievous, this is a breed that is always on the go, but that doesn’t mean they don’t love to take advantage of a warm lap as soon as you sit down. The Devon Rex thrives on human company and doesn’t pick favourites, they love everyone. 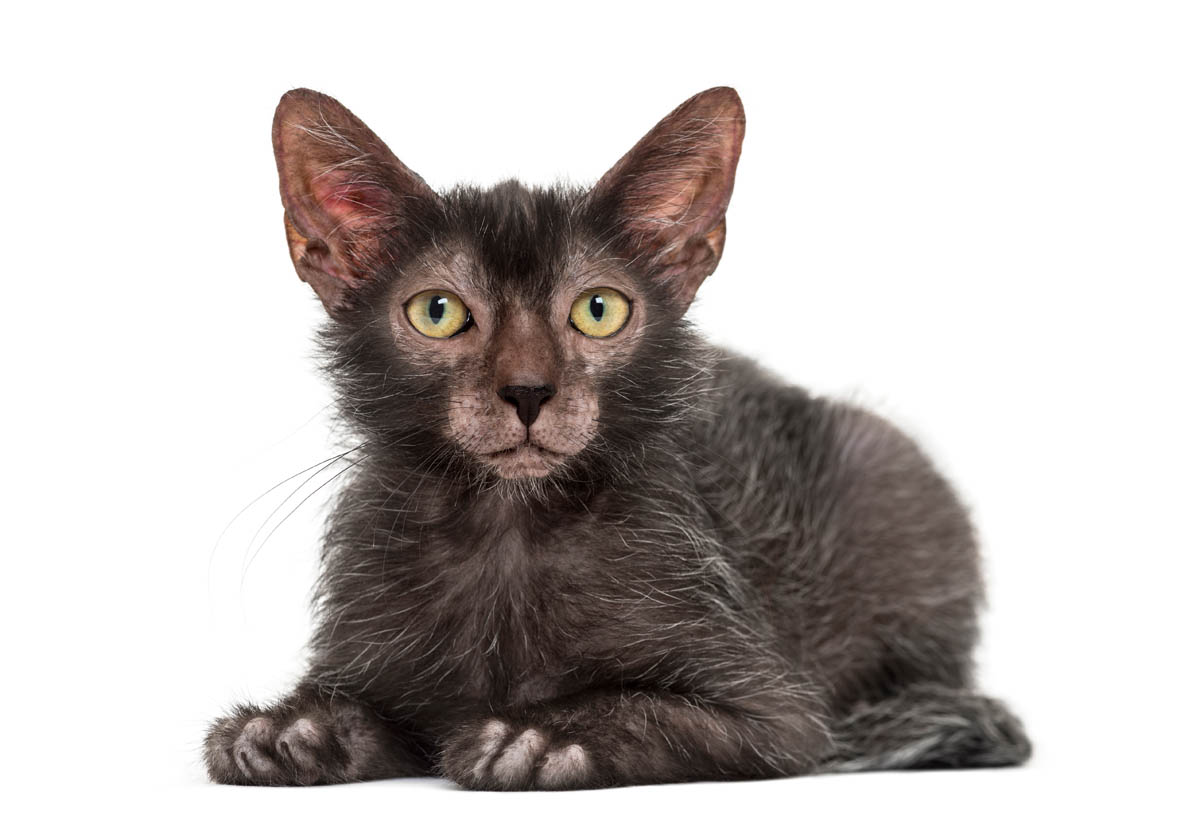 The Lykoi is a unique breed with the look of a werewolf. Named and founded by Patti Thomas, the Lykoi is the result of selective breeding of several domestic cats who were born with a mutation that made their fur unique.

The Lykoi pair (Silver Lining Wolfie and Ray of Hope) were born in 2010 to a black domestic cat (Eve Havah). The two cats were found in a rescue centre. Patti Thomas, a cat breeder in Virginia, acquired them as it was thought they may carry the same mutation as the Devon and Sphynx. Dr  Lesley Lyons of UC Davies, California performed genetic tests, and it was determined that the Lykoi did not carry the same gene as the Sphynx or Devon Rex.

The gene responsible for the unusual coat is recessive, which means the kittens need to receive a copy from each parent. From time to time, similar cats appear in feral cat populations and have been added to the gene pool. Outcrossing to black domestics ensures a wide and diverse gene pool. 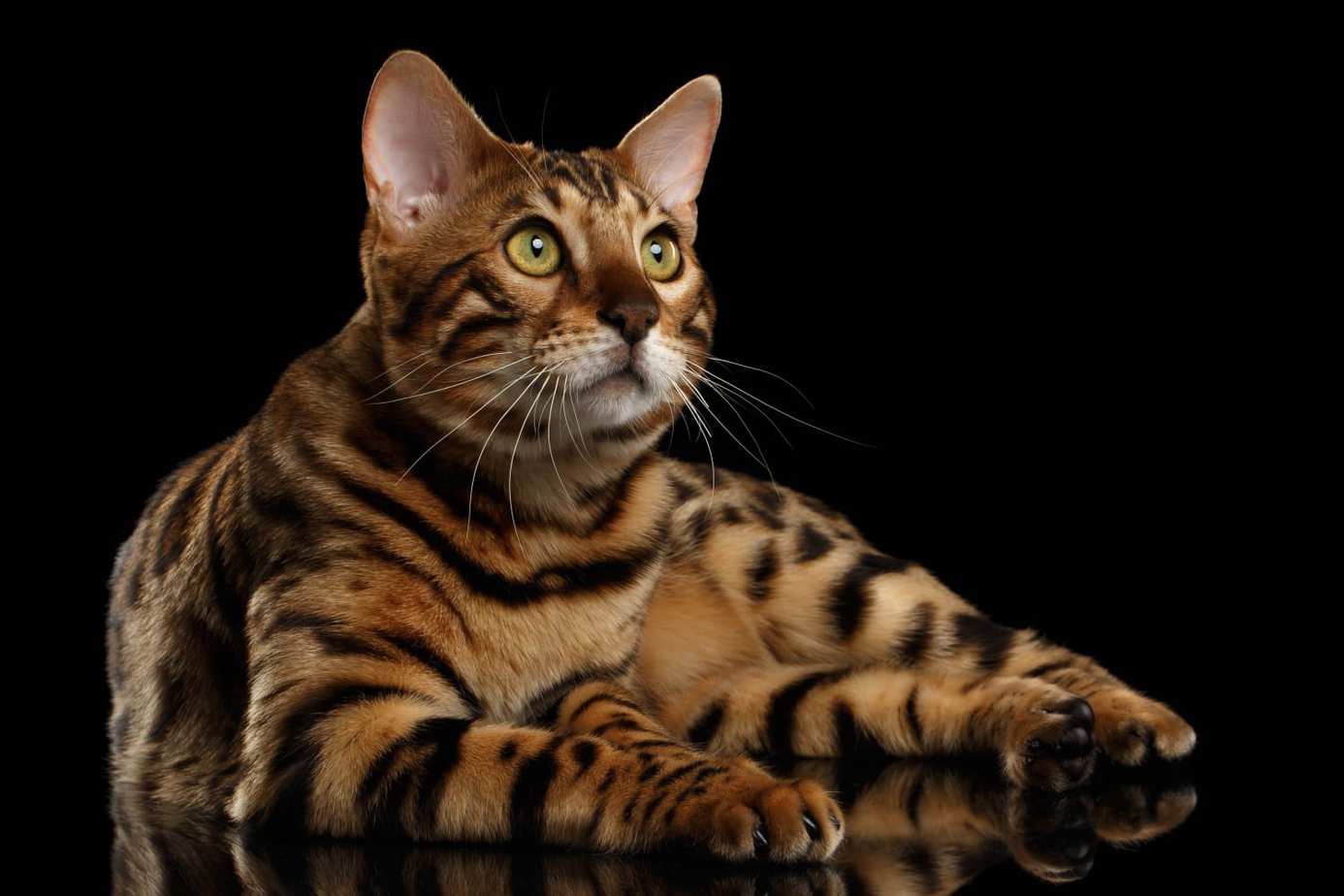 The Bengal is a wild-looking breed that was created by crossing an Asian Leopard Cat with domestic cats. Jean Mill, the breed founder was a conservationist who had wanted to create a domestic cat breed that had the appearance of the wild Asian Leopard cats to protect them from poaching. Her rationale was that if people could buy a cat that looked like the Asian Leopard cat, they would be reluctant to wear fur clothing resembling a domestic breed and therefore lead to a drop in demand for wild cat pelts.

Bengal cats are extremely intelligent and energetic cats who have a love of water due to their Asian Leopard Cat ancestry. Due to their intelligence, it is easy to train a Bengal to walk on a leash, so that they can enjoy the outdoors in safety.

The Bengal retains his or her kitten-like behaviour well into adulthood, they love to be up high and must be provided with the opportunity to climb.

The LaPerm is a curly-coated breed that was first discovered in Louisiana in 1982 when a barn cat named Speedy who was owned by Linda and Richard Koehl, gave birth to a litter of six kittens, one of whom was completely bald When her fur grew in, it was curly. Now named Curly, the kitten went on to have a litter of five kittens, all of whom were born bald but grew the same curly coat as their mother. These five boys mated with local cats, including a black cat who lived in the neighbourhood, who also produced curly-coated kittens.

The coat of the LaPerm doesn’t shed as much as other cats, and this can be further reduced by regular brushing to remove loose hairs.

LaPerms are gentle, sweet, loving, loyal and intelligent. They are an active breed, but also love to snuggle on their human’s lap when given the opportunity. Dog-like in nature, the LaPerm loves to be close to their human family at all times. The LaPerm gets along with everyone including children and animals which makes them an ideal family pet. 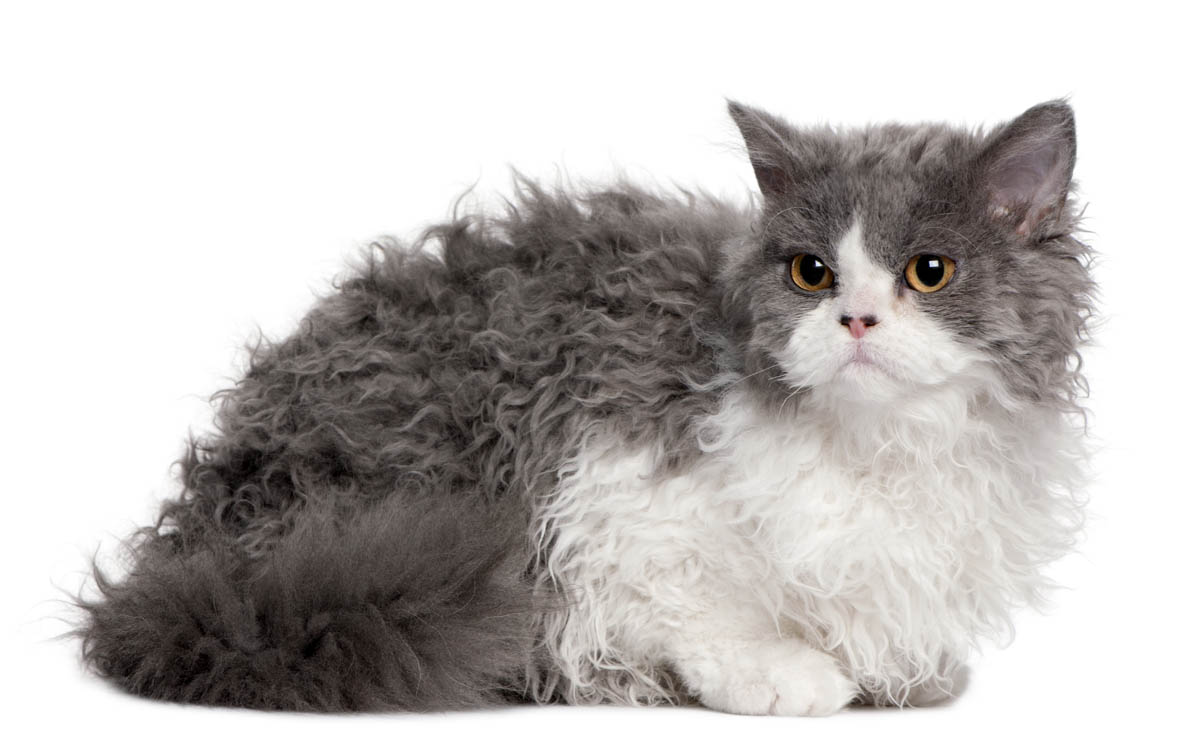 The Selkirk Rex history begins in 1987 when a curly-coated kitten was born to a litter of otherwise normal kittens. The litter along with the mother had been taken to an animal shelter in Wyoming. The kitten, now named Curly-Q found a home but was returned because she cried too much.

Peggy Voorhees of the Bozeman Human Society took Curly-Q to Persian breeder Jeri Newman who re-named her Miss De Pesto. Miss De Pesto was mated to a black Persian named Photo Finish and produced a litter of six kittens, three of whom had curly coats like their mother. The following year, a curly-coated male from this litter was mated back to his mother and three curly-coated kittens were born along with one straight coated kitten.

These cats were to become the foundation stock of the Selkirk Rex. Outcrossing to Persians, Exotics and the British Shorthair is still permitted to increase the gene pool.

Like the LaPerm, the Selkirk Rex sheds, but less than other breeds. Regular brushing can reduce the amount of shed hair in the home.

The Siamese is an ancient breed of cat known for its stunning blue eyes and dark points on a lighter background. The exact history isn’t known, but it is thought the Siamese is a cross between Birman and Annamite cats which were introduced into the guarded Burmese Temples and imported into Siam when the Cambodian Empire of Khmer fell to the attacks of the Siamese.

Me Edward Blencowe Gould, an acting Vice-Consul at Bangkok brought the first two Siamese cats, Pho and Mia, to England in 1884 and gifted them to his sister Lilian Veley. Mrs Veley went on to co-found the Siamese cat club in 1901.

There is anecdotal evidence from breeders and Siamese owners who claim that the Siamese sheds less than other breeds.

Siamese are an extremely intelligent, affectionate and loyal cat who tends to form a close bond with one member of the household. Some Siamese can become jealous of other pets or family members. They are often dog-like in their need to be close to their chosen person and will follow them around the house providing a running commentary. As a result, the Siamese does not do well on their own.

Most of these breeds still shed and are not hypoallergenic. As several of the breeds have considerably less or no hair, it stands to reason that less hair will be in the home.

Regular brushing can also reduce the amount of hair in the environment as well as feeding a good-quality diet.

Before choosing a cat, visit cat shows, and speak to breeders and pet owners who are always happy to answer questions about their chosen breed.