The role of the immune system is to defend the body from pathogens (disease-causing organisms) that can harm the body. Autoimmune disorders refer to a group of diseases in which the cat’s immune system mounts an inappropriate response to the cat’s own cells. Many different cell lines and parts of the body can be the target of an autoimmune disorder, and in some cases, multiple organs are affected.

Antibodies (immunoglobulin G or IgG) are Y shaped proteins produced by specialised white blood cells called B lymphocytes (or B cells) when it encounters a pathogen. Their role is to neutralise invading organisms. There are different antibodies for every pathogen (disease-causing organism) the immune system has encountered. So an antibody to the antigen on the feline herpes virus will not respond to the antigen on the feline calicivirus.

Antibodies tag and bind to antigens (molecules of the pathogen which induce an immune response), which trigger T-cells to engulf the antibody-bound antigen. It takes several days for enough antibodies to be produced to neutralise the pathogen. After this time, antibody numbers decrease; however, memory cells remember the pathogen and if the immune system reencounters it, memory cells spring into action and quickly produce antibodies. This demonstrates why most people only catch diseases such as chickenpox once.

The immune system in cats with autoimmune disorders produces antibodies against the cat’s own tissues (autoantibodies) which leads to their destruction. 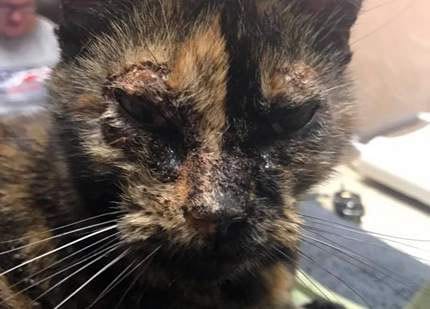 Pemphigus complex is a group of rare bullous autoimmune diseases in cats that results in the formation of superficial vesicles and bullae (a blister that contains serous fluid) which rupture to form crusted erosions on the skin.

Genetic predisposition, exposure to sunlight, certain drugs such as cimetidine and ampicillin, and a history of chronic inflammatory disease are all possible causes.

There are three types of pemphigus in cats:

Treatment of pemphigus complex can be difficult. It involves immunosuppressive therapy to stop the cat’s own immune system from attacking the tissues.

A large dose is initially administered to induce remission; however, due to the potential side effects of these medications, once remission is achieved, the dose will be tapered to the lowest possible dose to manage the condition.

Immune-mediated polyarthritis is an immune-mediated form of polyarthritis (inflammation of several joints) affecting the movable joints (hips, knees, shoulders). Antibodies bind to the antigen in the joint to form antibody-antigen complexes which are deposited within the synovial membrane; this causes an inappropriate immune response and inflammation within the affected joints.

First reported in 1971, systemic lupus erythematosus (SLE) is a rare autoimmune disorder that can affect any organ system in the cat. Antibodies are proteins produced by the immune system to counteract and protect the body from antigens such as invading viruses and bacteria. However, sometimes the body produces antibodies against itself (known as auto-antibodies), attacking various systems including the skin, joints, blood vessels, kidneys, heart, and lungs.

The cause of SLE is unknown, although it is thought to be a combination of several factors including genetics, pharmacological agents, environmental, viral infection and exposure to UV light. Siamese, Persians and their related breeds appear to be at greater risk of developing the disease. There is no age or sex predilection in cats.

Symptoms of SLE depend on the body system affected but can include the following:

Note: NSAIDs and corticosteroids should not be given concurrently due to severe side effects, including gastroduodenal ulceration and renal papillary necrosis.

Immune-mediated hemolytic anemia (IMHA), is a disease in which the cat’s own immune system produces antibodies against its own red blood cells. Red blood cells (erythrocytes) supply oxygen to the tissues of the body.

IMHA can be classified as primary or secondary. Primary IMHA is caused by an inappropriate immune response, and no underlying cause can be found. Secondary IMHA is brought about by a drug, toxin (onions, metal objects containing zinc), cancer, parasite or infection which adheres to the red blood cell, altering them to the extent that the cat’s own body no longer recognises them as ‘self’ and initiates a humoral response (antibody production). These antibodies stick to the red blood cells and target them for destruction (hemolysis) by the spleen.

The exact cause of primary thrombocytopenia is not known, but it may be due to antigen on thrombocytes closely resembling foreign antigen, hapten formation (haptens are minute molecules that elicit an immune response only when attached to a large carrier such as a protein) and a loss of immune tolerance mechanisms.

Secondary thrombocytopenia can be caused by a viral or bacterial infection, cancer, certain drugs, and tick-borne infections.

There are several causes of dry eye, including immune-mediated inflammation and/or destruction of the tear glands.

IBD is the leading cause of chronic vomiting and diarrhea in cats. It can affect cats of any age, although it occurs more often in middle-aged to older cats. Persistent inflammation results in fibrosis (formation of scar-like fibrous tissue), poor digestion and absorption may also result.

The cause of IBD is still unknown although evidence suggests that it could be the result of certain bacteria, dietary allergy or intolerance, genetic influence and parasites causing cats to produce antibodies that attack their own digestive tract.

Increasing attention is being focused on the role of gut microflora (gut microbiome) which are a group of micro-organisms that live in the gut and has many roles such as inhibiting pathogens, metabolic function, assisting the immune system, regulating the production of antibodies.

Clinical signs vary depending on the region affected.

An eosinophil is a type of white blood cell that participates in allergic reactions and helps to fight certain parasitic infections. A granuloma is an inflammatory lesion that contains granulocytes. These are a type of white blood cell made up of small cytotoxic granules, which are released (degranulation) in response to a microorganism or parasite.

In addition to addressing the underlying causes outlined above, treatment of the lesions may include:

This condition affects multiple peripheral nerves (parts of the nervous system outside the brain and spinal cord), which extend to the head, body, and limbs. Sensory (nerves which carry information to the central nervous system), autonomic (nerves which control parts of the body not consciously operated such as heartbeat, digestive system, and pupillary response) and motor (responsible for movement) can be affected resulting in several symptoms depending on the nerves affected.

Symptoms of immune-mediated polyneuropathy can be acute (sudden onset) or chronic (slow and progressive) and include the following:

Immunosuppressive drugs such as corticosteroids and azathioprine (Imuran) to suppress the immune system.

Supportive care may include fluid therapy and nutritional support are important for cats who are experiencing difficulty swallowing due to malfunction of the esophagus.

A congenital or acquired neuromuscular disorder that causes muscle weakness. All muscles are controlled by their own nerve; this nerve doesn’t directly connect to the muscle; there is a small gap between the two which is known as the neuromuscular junction.