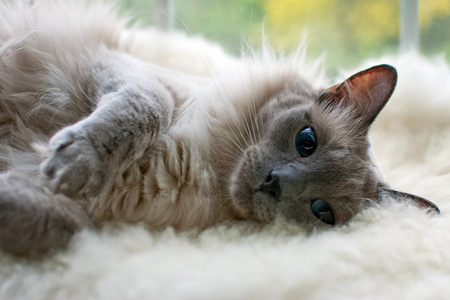 The Balinese is a longhaired Siamese who originated in the United States in the 1950s. They share many similar traits with their Siamese cousins, including intelligence, loyalty, and playfulness.


Despite their names, Balinese cats don’t come from Bali but originated in the USA. They are, in essence, a longhaired Siamese cat. The gene responsible for the long-haired coat is recessive, you need two copies of it, one from each parent. A cat can have short hair but carry the recessive gene for long hair, and you won’t know it unless it parents a longhaired kitten. Occasionally a long-haired Siamese would turn up in a litter of kittens, but these were sold as pets.  It is not known if the longhair gene was introduced to the breed at some point or if it occurred as a spontaneous mutation.

The first longhaired Siamese cat was registered with the Cat Fanciers Federation (CFF) in 1928, however, breeding these cats didn’t begin until the 1950s when Marion Dorsey of Rai-Mar cattery in California developed a breeding plan for these “longhaired Siamese”. Then the early 1960’s a second breeder by the name of Helen Smith of MerryMews Cattery in New York became involved. It is Helen Smith who came up with the name “Balinese” for the breed. She likened the cats to the Balinese dancers. Helen was the first breeder to show Balinese cats at in the AOV (any other variety) category with the CFA.

Marion sold her cattery in 1965 to Sylvia Holland of Holland’s Farm Cattery who continued with the Balinese breeding programme. 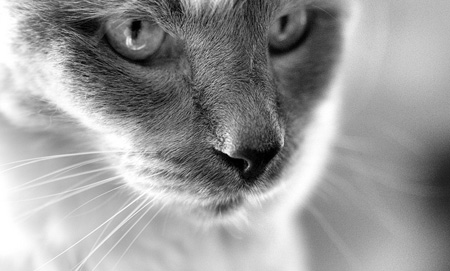 The Balinese has the appearance of the Siamese, only with a longer coat. They are a slender cat with fine boning, long tapering lines, and a tubular body.

The head is wedge-shaped, with large ears continuing the wedge shape, almond-shaped blue eyes and a long, straight nose with no break.

The medium-length single coat is fine and silky, lying flat against the skin. Balinese colours vary between organisations. Some cat associations only permit the traditional Siamese colours of Seal, Chocolate, Blue and Lilac,  other colours are shown under the breed name of Javanese.

Males are usually larger than females.

The Balinese is an extremely intelligent breed of cat with a similar personality to the Siamese. They are incredibly loving and bond closely with their human companions.

They are a playful breed and enjoy games with the family. Balinese cats like to be where you are and will follow you from room to room. Just like the Siamese, Balinese cats are talkative.

Balinese are easy going and get along with people and other pets. They make an excellent family pet.

They are a low maintenance cat but will require a groom once or twice a week.

Dental care is extremely important. Brush teeth daily with a pet toothbrush and toothpaste (never use human toothpaste) and give raw chicken necks or chunks of steak two to three times a week.

Kittens require three vaccinations at 8, 12 and 16 weeks of age and then every 1-3 years, or as your veterinarian recommends.