Some say calico cats are good luck, but black cats get a bad reputation. Here are the facts about this mystery cat.

A calico cat is a domestic cat with a tri-color coat. The calico is commonly 25 percent to 75 percent white with orange and black patches. While white is the most common color in a calico, a calico cat does not require white to be the largest to qualify. 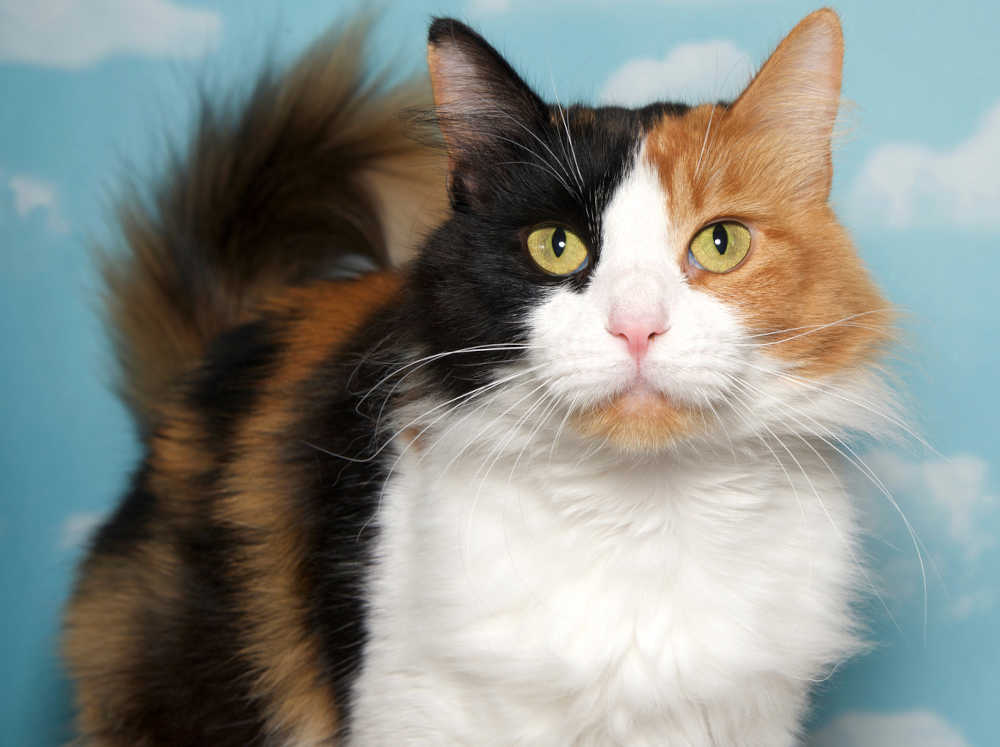 Some mix the calico with the tortoiseshell, which has a coat of black and orange with few or no white markings.

Outside North America, “calico” is called “tortoiseshell and white.” Sometimes a calico coloration combined with a tabby pattern is known as a “caliby.”

What is a black calico cat?

There is not a calico “breed.” Calico refers to the pattern of the kitten’s fur. However, a “black calico” is not entirely black!

The “black genes” combine with the “dilution” gene to create calicos called muted calicos! These “black calicos” are also known as “blue” or “blue-black.” Not surprisingly, this cannot be very clear.

Many believe tortoiseshell cats are a version of calico cats. However, torties are known for their mottled spotting (with no white spots) versus the white spotting of the calico.

The colors of calicos can include black, brown, gray, and more, as shown below: 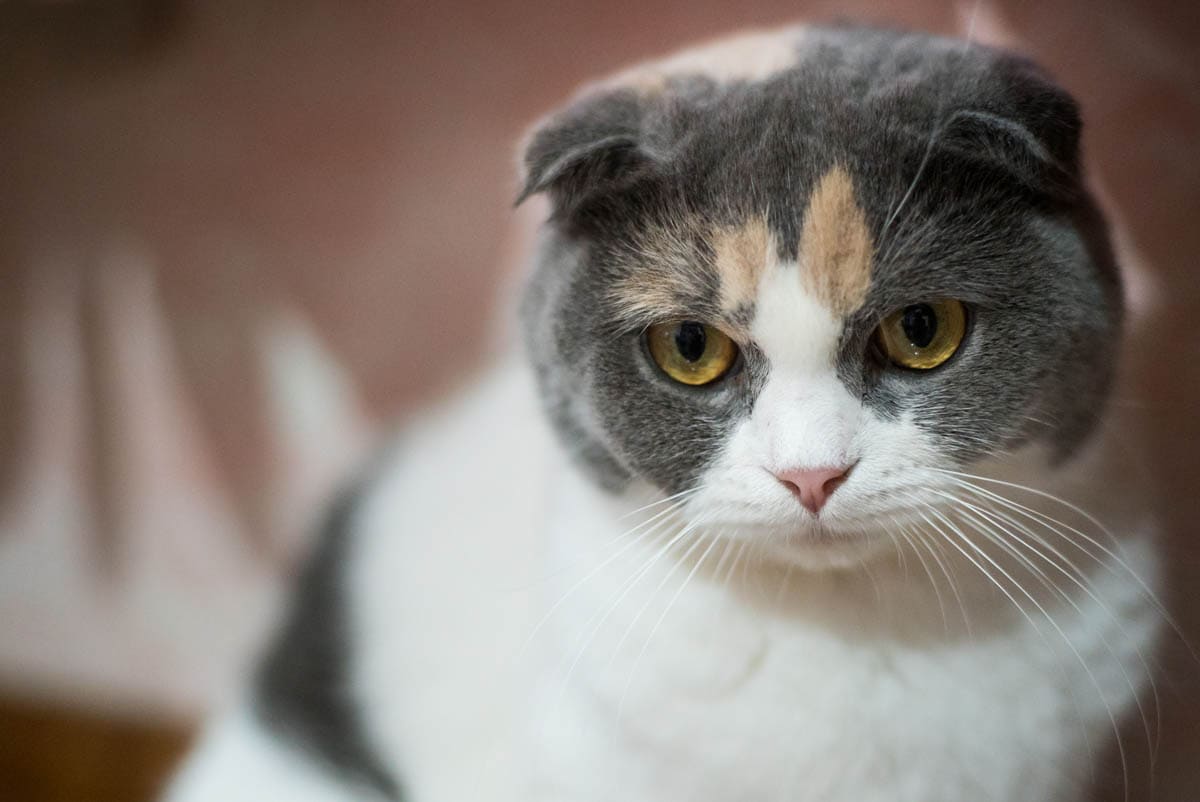 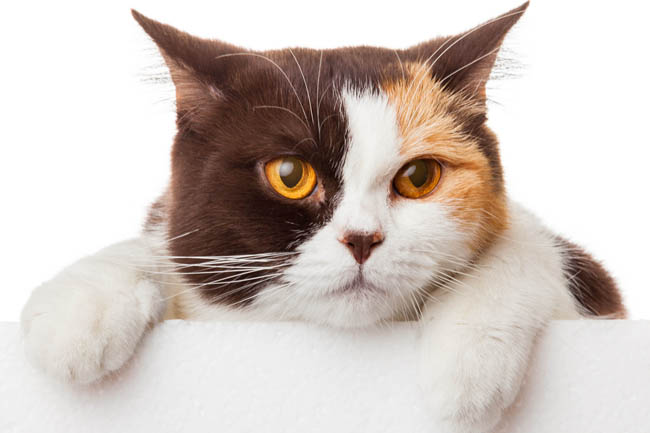 The genetics of a black calico cat

A female ends up with two X chromosomes. However, early in development, cells “switch off” in one of the X chromosomes randomly. This inactivation remains when cells divide. About half of the cells are from the father’s X chromosome and a half from the mother’s.

Additionally, calico cats have genes that create white spotting. These mix together to create the unique look of calicos: three colors.

Is every calico cat female?

Almost every calico cat is female due to the genetics associated with fur patterns. However, 1 in 3000 calicos is male.

A fetus’s normal development requires one set of DNA from the mom and one from the dad. In rare cases, a cat is born with three sets of DNA– two X chromosomes and one Y chromosome.

These cats are technically male due to the presence of the Y chromosome, but because of two X chromosomes, they can present the calico fur pattern.

Calico cats are pretty common! Since males and females of different colors can pass genes to the next generation, these color patterns have no shortage. However, muted calicos happen about one out of a thousand felines.

Furthermore, black calicos are not limited to a particular breed. The most common calico cats are American shorthairs or mixed breeds.

Certain breeds with pedigree requirements do not accept calicos into the fold. These include the Siamese and Himalayan. However, the Persian, Maine Coon, and Japanese Bobtails allow the tri-colored fur to be registered.

What is the personality of a black calico?

The personality trait most associated with calicos is attitude. These cats are known to be sassy, spunky, loving, and very vocal. These kittens are not scared to tell you what they need or want!

If you’re looking for a best friend who happens to be very demanding, this is the cat for you! They are certainly larger than life.

Do black calicos have specific health issues or needs?

Many factors affect your cat’s appetite. Food is not a one-size-fits-all thing, which can be frustrating. It takes trial and error to find something that works for you. Luckily, calicos don’t have any special diet needs.

Ensure your kitten is getting proper nutrients as they require more energy. Additionally, larger breeds have a higher appetite. For appropriate food amounts, contact your veterinarian.

The longevity of the calico is the same as any other cat: around fifteen years. However, every cat is different, and it can depend.

These friends are not known for specific health issues but have the same prevalence as other breeds or fur patterns. There are particular health issues associated with Klinefelter Syndrome for male calicos.

If you’re concerned, a pet insurance plan can come in handy to cover any unexpected medical expenses.

Your kitten works hard to ensure they are clean and bathed every day. Most cats spend between 30 to 50 percent of their day grooming themselves.

If your calico comes as a long-hair, brushing becomes a vital habit to prevent mats and tangles.

The size of the calico cats depends on the breed more than anything. Cats can range between 7 to 12 pounds. However, larger breeds such as the Maine Coon can grow much larger.

Calicos are called “money cats” in the United States. Despite believing that black cats are unlucky, these multi-colored beauties are the opposite. Additionally, other countries consider them to be good luck charms.

In Japan, calicos are believed to ward off ghosts and evil spirits. They were kept on boats to protect fishermen and other workers near the water.

A post shared by Venus the Two Face Cat (@venustwofacecat)

What are some name ideas for a black calico?

No matter what name you choose for your kitten, it’s an important decision. It’s what you’ll be calling them for the next ten to fifteen years! If you’re feeling stuck, here are some ideas.