Siamese cats are known for their long, slender body, stunning blue eyes, and their unique pointed coat pattern. The breed comes in several colours; the most common are seal, blue, chocolate, and lilac.

All Siamese cats have an off-white, or cream body with darker colour on the nose, ears, feet and tail. This unusual colouration is due to the Himalayan (or pointed) gene, which causes partial albinism. The gene is temperature-sensitive, and is inactive on warmer parts of the body such as the trunk, but is active on cooler parts of the body such as the nose, ears, and tail, allowing pigment synthesis on these parts of the body. The Himalayan gene is recessive, which means two copies of the gene are required (one from each parent). If you mate a Siamese cat to a Siamese cat, the offspring will all be Siamese (or colourpoint with some cat councils).

The Himalayan gene also occurs in rabbits, rats and mice.

Is there such a thing as a black Siamese cat? 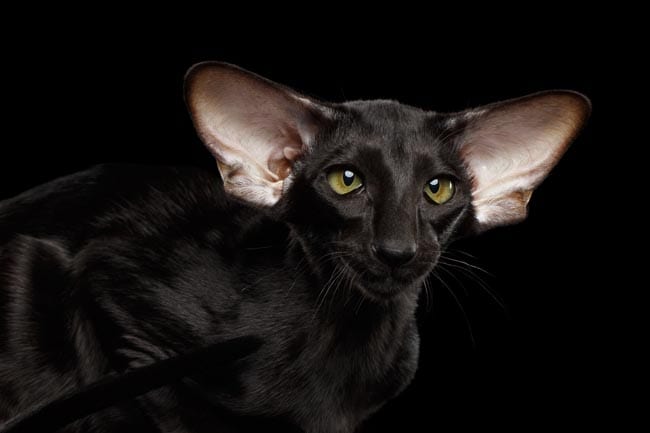 No,  however just to confuse things, genetically a seal point Siamese is a black cat, but the Himalayan gene prevents the production of melanin (pigmentation) in the hair on the warmer parts of the body, resulting in the pale cream/white colour on the body with darker pigmented areas on the nose, ears, and tail. Think of it this way, a black cat wearing a cream tank (vest) which masks (hides) the black colour on the warmer parts of the body.

If you are looking for a true black cat with the Siamese temperament and body shape, then the Oriental (or Foreign Shorthair) is the cat for you. They are essentially a coloured Siamese cat.

The cat pictured at the top of the page is a black Oriental, his father was a caramel Oriental, and his mother was a seal point Siamese. As he is a black cat, he is registered as an Oriental while some of his littermates had the Siamese colouring and were registered as Siamese cats. Unlike the Siamese, though, you will not find a black cat (Oriental or another breed) with blue eyes. The Oriental’s eye colour will be a shade of green, gold or yellow.

Breeds of cat with pointed coats


Breeds of cat with black coats 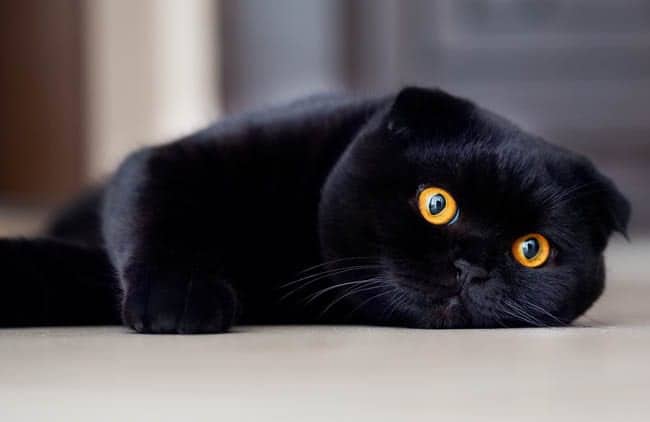 If it’s not a Siamese, then what breed is my black cat?

If you have a black cat with the long, slender appearance of a Siamese cat, the chances are you have a mixed breed or domestic shorthair cat. These cats can come in all shapes and sizes, some large and stocky, others slender and long. Of course, the cat may have some Siamese in its background, but a black cat cannot be Siamese as all Siamese cats have points.