What are the black spots on a cat’s gums, lips and nose?

Lentigo is the name of a common condition in which flat, brown or black spots appear on mucocutaneous junctions of the face (gums, lips, nose and eye margins) of orange, tortoiseshell, calico, yellow, flame (red) point cats. It is the result of an increase in the number of epidermal melanocytes – pigment-producing cells – which causes hyperpigmentation.

Black areas of pigmentation first appear on the lips, and later lesions can develop on the eyelids, gums, and nose. Lesions start small and become more widespread as the cat ages.

The presence of lentigo is completely normal and harmless, however, any changes to the skin and mucous membranes must be evaluated by a veterinarian to differentiate them from melanoma, which is a cancer of the melanocytes.

Freckles are associated with sun exposure in humans; however, the cause of lentigo is unknown in cats.

Lentigo is a benign condition, and most veterinarians can diagnose it based on presenting symptoms. In some cases, the veterinarian may recommend a biopsy with a fine needle for microscopic evaluation.

Lentigo is a cosmetic condition only and requires no medical treatment.

Black spots on the lips and chin of cats 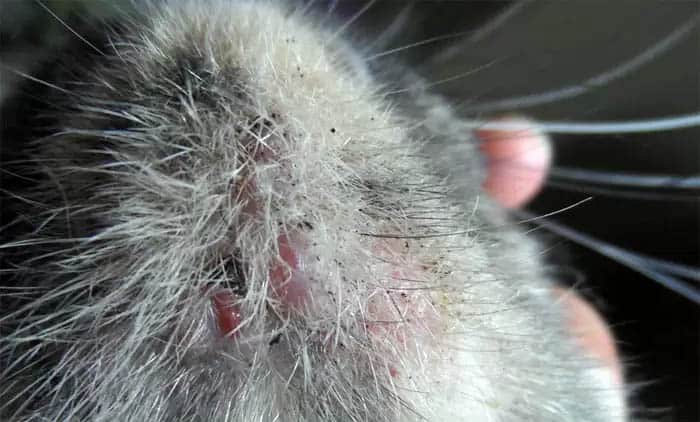 Feline acne is a common skin disorder characterised by the presence of black comedones (blackheads) predominantly on the chin but can also develop on the lips.

I have already covered this topic in detail here, so won’t go over it again. Acne can range from mild, as in the cat below to severe. Severe acne can become inflamed and progress to open sores on the chin, which will need treatment with antibiotics and medicated shampoos.