What is a brachycephalic cat?

The Persian is the foundation stock for all of the flat-faced breeds. Persians have been a favourite on the show bench for 150 years, but they didn’t start out with a short nose. The supplement from Harper’s Weekly dated January 27, 1872, shows a Persian cat with an average length nose. 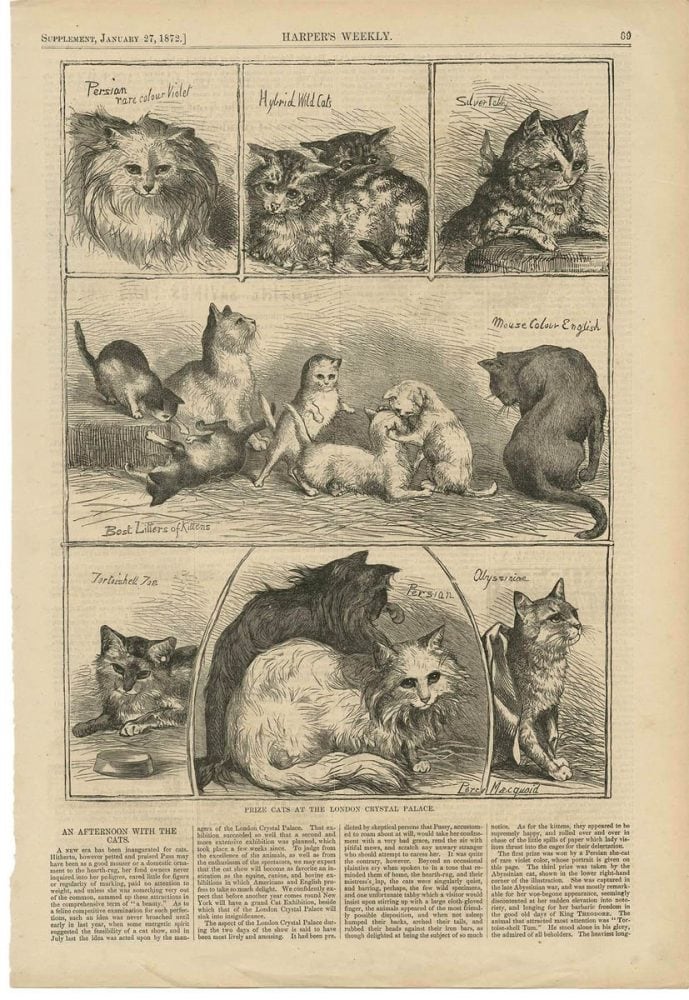 The Peke-faced Persian originated in the red tabby Persian which gave the breed a more extreme ‘peke-faced‘ appearance similar to the Pekinese dog. A reference to the Peke Faced Persian is made in Cats and All About Them by L. H. Fairchild and Helen D. Fairchild from 1946 where they write:

“The Peke-faced cat should conform in colour, markings and general type, to the standards as set forth for the red and red tabby long-haired cat. The head should resemble as much as possible that of the Pekinese dog from which it gets its name. The nose should be very short and depressed or indented between the eyes. There should be a decidedly wrinkled muzzle.”

Most cats fit into the mesaticephalic range, with an average head length. The Siamese and Oriental have slightly longer dolichocephalic heads, but not as extreme as dolichocephalic dog breeds such as the Afghan hound or whippet.

Do brachycephalic cats have health problems?

Brachycephalic airway syndrome is a condition affecting short-nosed cats and dogs which refers to an elongated soft palate, stenotic (narrowed) nares (nostrils) and everted laryngeal saccules (tissue within the airway, just in front of the vocal cords, is pulled into the trachea and partially obstructs airflow. All of which makes it difficult for the animal to breathe normally.

Brachycephalic ocular syndrome is caused by the short skull and shallow bony orbit. Bulging eyes protrude from the head, lower eyelids are prone to turning in on themselves (entropion) and rubbing against the sensitive cornea.

The lacrimal gland produces the watery portion of tears, which drain from each eye and into the nose via the nasolacrimal duct. The nasal duct of Persian and related breeds can block resulting in a chronic overflow of tears (epiphora) out of the eyes.

What can be done about brachycephalic cats?

Brachycephalic cat and dog breeds continue to remain popular among pet owners. Frenchies and pugs seem to be everywhere at the moment.  There is growing pushback, particularly among veterinarians and animal welfare organisations, who continue to raise concerns over the ethics of breeding animals who may suffer their entire life.

Search the internet for the term ‘flat-faced cat breeds‘ and almost all articles refer to their cuteness, which just exacerbates the problem. Raising awareness of the potential suffering brachycephalic animals suffer is important if things are going to change.

Many people find the large face and round eyes appealing, and pet owners absolutely cannot be blamed for the changes to flat-faced cats. This comes down to breed standards, interpretation of breed standards, judges and cat breeders. Some breeders have pushed back and are now breeding less extreme ‘doll-face’ or ‘traditional‘ cats with more emphasis on health. Hopefully, over time, these more moderate breeds will become mainstream and the health and welfare of cats (and dogs) will take priority.