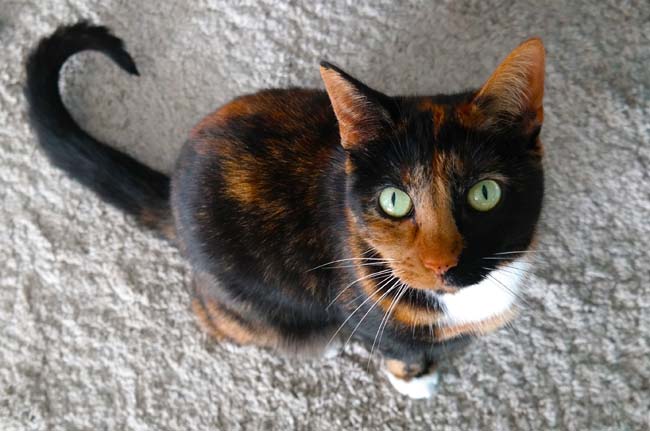 
Calico is a common coat pattern which occurs almost exclusively in female cats and consists of a white base (25-70%) with patches of red and black, red and grey or red and brown. Calicos are not a breed, the word calico refers to the coat colour only, and calico can be found in both random-bred and purebred cats.

The calico is also known as tricolour or tortie and white outside the United States of America.

There are four base (solid) colours in cats:

Why not white? Because a cat with a coloured and white coat (calico or bi-colour) has a gene which switches off colour in some parts. The gene responsible is known as piebald or spotting gene (abbreviated to S) and is dominant, as signified by the uppercase S. This means a bi-colour or calico cat is genetically a coloured cat, but the S gene has switched off the colour in certain areas.

Only 1/3,000 calico or tortoiseshell cats are male. To understand why calicos are so rare in male cats, we need a basic understanding of genetics.

The red (actually known as orange and abbreviated to O) gene is only carried on the X chromosome, which makes it sex-linked. The O gene is dominant (all dominant genes are abbreviated in UPPER CASE, all recessive are lower case). The mother’s eggs only carry an X chromosome, but the male sperm can carry either an X or a Y chromosome. Each cat will inherit an X from their mother and an X or Y from the father.

If however, the female kitten inherits both the O and the o (usually black) gene, then because she has two X chromosomes (instead of an X and a Y like the male), both black and red will show making a tortoiseshell cat. If she also inherits the white spotting gene which is responsible for the white coat colour, she will be black, red and have areas of white.

I like to think of the X chromosome as having four sections (or arms), and the shorter and smaller Y only has three. The extra arm the X chromosome contains additional genes including the O gene. Most genes (except for the sex-linked X and Y) come in two pairs, one from the mother and one from the father. Therefore the male cat only inherits one O gene (which is dominant) from the X chromosome from his mother.

Black or brown with red and white are the most common calico colour combinations.

Some cats carry the dilution gene causes clumping and an uneven distribution of the pigment granules in the hair shaft, producing a dilution of the coat colours which changes black to grey (blue) or and orange to cream.

The dilute modifier gene caramelises the coat colour of dilute cats who carry the gene.

The chart below shows the effects of the dilution and the dilute modifier genes on the coat colours.

We already know that calicos are almost always female cats, and they are as fertile. It is very rare for a male to be calico when he is; he is almost always sterile.

We know that for a cat to have a calico cat, two X chromosomes are necessary, and the male has one. So how is it possible that some male cats are calico?

Breeds of cat which can come in calico

The calico has been the Maryland State cat since 1st October 2001. Calico cats were chosen because their orange, black and white colouring resembles the colouring of the Baltimore oriole, a state bird and the Baltimore checkerspot butterfly, the state insect.

Where does the name calico come from?

Calico is taken from a fabric with the same name which originated in Calicut, (from which the name of the textile came) in southwestern India.

How to pronounce calico

As calico is a colour and not a breed which many have specific traits, each calico cat will vary.

What is a calico cat personality?

Again, this will vary from cat to cat. A calico cat who has been kept with her mother until ten weeks and had plenty of human contact during this time will generally be friendly and get along with people.

What is the difference between a calico cat and a tortoiseshell (tortie) cat?

A tortoiseshell cat is black or brown, and orange and are often mottled, a calico also has patches of white. Read here for more information.


What is the name of a calico cat with tabby markings?

Calico cats are associated with the Maneki Neko (also referred to as Lucky cats, Money Cats or Beckoning cat) which is placed in the doorway of businesses and homes to bring good luck and fortune.

Do calico cats have health problems?

Female calico cats are as healthy as any other coat colour, however, male cats with Klinefelter’s syndrome (XXY) can have health issues associated with their condition.

It is possible that a male calico is a chimera, meaning the cat carries two distinct genotypes. We know that identical twins occur when one fertilised egg splits and develops into two babies, who share almost identical genetic profiles. In chimera cats, two non-identical fertilised eggs merge into one during early development which results in a cat with two different cell lines in the one body.

No, the calico is no more expensive than any other cat. Male calico cats are rare, however, they do not attract a higher price tag than female calico cats.

The lifespan of the calico is between 12-14 years for an indoor cat.