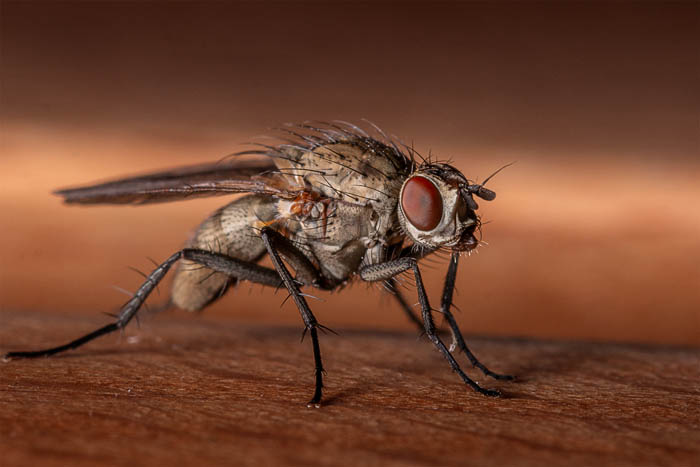 Table of Contents hide
1 Can cats get sick eating flies?
2 Pathogens carried by flies
3 What are the risks?
4 How to stop cats eating houseflies
5 Frequently asked questions

Most of us know how much cats love to catch and eat flies; we’ve even given them the name ‘sky raisins‘. While most of us find the thought of eating a fly repulsive, cats don’t share our disgust. Being natural-born predators, cats are hardwired to hunt.

The most common fly in our homes is the housefly (Musca domestica), which has a global distribution. Other common flies include the filth fly (M. sorbens) which can be found in warmer climates and the blowfly (Calliphoridae).

Can cats get sick eating flies?

Houseflies feed on human foodstuff and waste, including feces. The fly’s mouthparts are designed to ingest liquid food, to digest solid foods, the fly vomits saliva and digestive juices to liquefy the food, which is then sucked up through the proboscis. Flies can pick up pathogens including bacteria, viruses, fungi and parasites while crawling and feeding. One study found that houseflies carry as many as 130 pathogens on their body and that bacteria showed antimicrobial resistance to Campylobacter and Salmonella.

Bacteria isolated from houseflies which can infect humans and animals:

Fungi isolated from houseflies which can infect humans and animals:

Parasites isolated from houseflies which can infect humans and cats:

In addition to carrying a number of pathogens, houseflies may have also been exposed to insecticides, which are toxic to cats. However, the amount of exposure from one or two houseflies would be minimal. But still, it is not ideal.

What are the risks?

It is difficult to answer that as there are no research studies which looked at the incidence of infection in cats who ate houseflies and it would be difficult to study in a home situation because cats are exposed to pathogens in many other ways, not just houseflies.

My four cats chase houseflies, I don’t like it, but I wouldn’t rush them off to the vet if they ate one. I do my best to keep flies out of the house to prevent the cats from eating them.

Always seek veterinary attention if your cat develops symptoms of sickness which can include loss of appetite, vomiting and/or diarrhea.

All cats, even those who are exclusively indoors, can become infected with worms which highlights the importance of a regular worming regime. Not only because of the potential risk of infection from flies but other modes of transmission such as infective eggs brought into the house on shoes or clothing, eating cockroaches and flea transmission of tapeworm.

How to stop cats eating houseflies

Cats will be cats, and most love the thrill of hunting houseflies. All we can do as pet-owners is make changes to discourage houseflies from entering our homes.

Can a cat get maggots eating flies?

Maggots are the larvae of adult houseflies. A cat cannot get maggots by eating flies but can get myiasis (maggot infection) if a fly lays eggs in an infected wound. Sick and immunocompromised cats are at greatest risk.

Matted hair which is contaminated with feces and urine can also attract flies which lay eggs. Eggs hatch into larvae, which is the maggot stage of the fly life-cycle and maggots can quickly invade surrounding tissue.

Can flies lay eggs on cats?

Yes, as above, flies can lay eggs in infected skin wounds and fur contaminated with urine and feces.