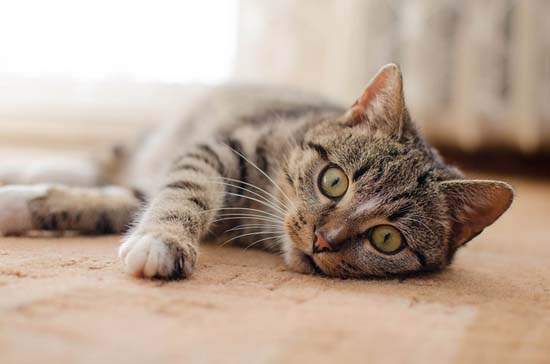 Can indoor cats get worms?

Yes, even indoor cats can become infected with several types of parasitic worm. The risk of infection is lower by keeping a cat indoors; it is still possible for infection to occur in several ways which are outlined below.

How do indoor cats get worms?

Parasitic worms have evolved to be opportunistic, and there are several ways in which they can infect cats, even those who are strictly indoor cats. 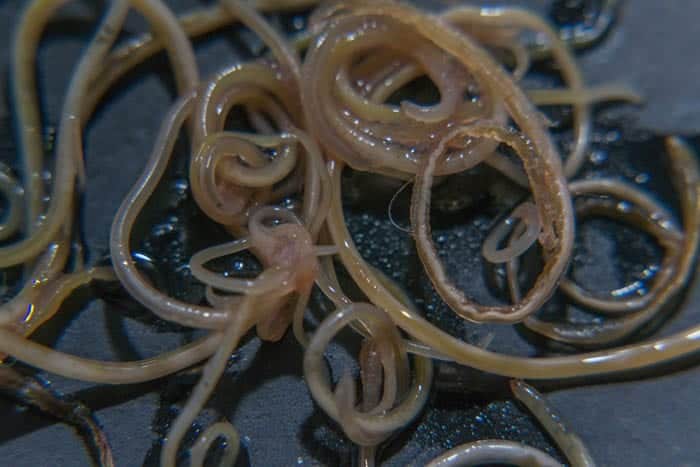 When a cat becomes infected with roundworm eggs, larvae (immature roundworms) hatch and some migrate through the tissues where they form a cyst and lie undetected in a dormant state and immune to worming products.  During pregnancy, dormant cysts are reactivated and migrate to the mammary glands where they go on to infect kittens when they nurse from their mother (lactogenic transmission).

Hookworms are small, thin nematodes that are approximately 10 to 20 mm in length and are a common intestinal parasitic worm of dogs but can also infect cats.

They live in the duodenum, the first part of the small intestine, where they attach themselves to the mucous membrane using teeth-like hooks to feed on the blood. Worms change their point of attachment every 4-6 hours, which causes the area to bleed.  Blood loss due to the can lead to anemia, intestinal bleeding, intestinal inflammation, diarrhea, and even death.

Adult hookworms produce eggs which are shed via the feces. Once in the environment, eggs hatch into infective larvae after 2-5 days.

As infective hookworm larvae are in the environment, it is possible to track them into the home on our shoes. Infection can occur if the cat inhales or ingests the larvae (from the coat), or via skin penetration.

Transmission this way is uncommon, but it may be possible. 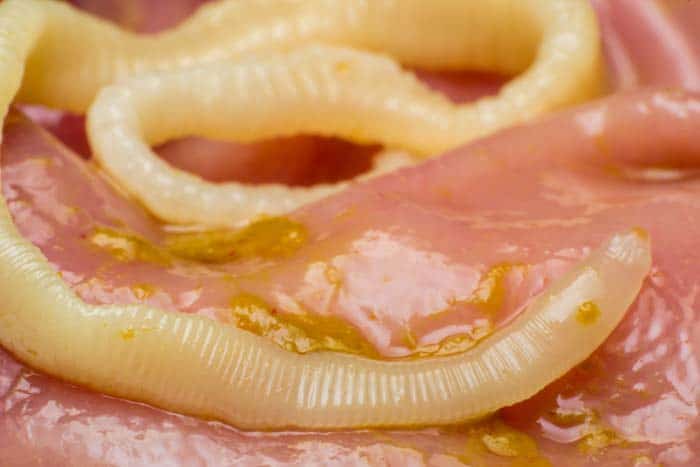 Also known as cestodes, tapeworms are flat, segmented worms which live in the small intestine of cats and other mammals.

Tapeworms have no mouth or digestive tract themselves and must obtain their food source pre-digested, they have a tough outer skin that is capable of withstanding the strong digestive juices. Tapeworms absorb the cat’s pre-disgested food through their porous skin.

There are approximately 5,000 species of tapeworm in the world, each of which has a specific host,  only a small number of tapeworms infect cats.

Dipylidium caninum is transmitted via the bite of a flea infected with larval tapeworm. Infection occurs in the flea during the larval stage, when the flea feeds on organic debris (mostly adult flea feces and flea eggs, but they will eat other parasitic eggs in the environment).

Once inside the flea larvae, the tapeworm larvae migrate to the body cavity where it remains during the larval transformation into an adult flea.

If a cat infected with fleas accidentally ingests an infected flea when it grooms, the flea breaks down to release the immature tapeworm.

Indoor cats can become infected with fleas which may hitch a ride on a person or other pet, or if pupae are in the house which becomes activated by the heat or carbon dioxide of a passing animal (cat or dog). A flea infestation is not a reflection of poor hygiene; any cat or household can have fleas.

Taenia taeniaeformis is less common in cats. Transmission occurs when a cat ingests a rodent infected with larval tapeworm.

Obviously, most households are rodent-free, but if a rodent does enter the home, and the cat eats it (our 16-year-old Burmese once caught and killed a mouse in the home), infection is possible.

Dirofilariasis or heartworm is a serious parasitic infection caused by the nematode Dirofilaria immitis which lives in the pulmonary arteries, lungs, and hearts of cats. Heartworms are a type of roundworm, with adult heartworms reaching a length of 12 to 30 cm.

Infection occurs via the mosquito who passes on the microfilaria (baby heartworms) when they feed on the cat. Due to their size, mosquitoes can easily enter the home through holes in screen netting, open windows or doors, or even on a human when they enter the house.

Other possible modes of transmission:

Moths, spiders and flies can be transport hosts for worms. There is very little information regarding the risks, but anything that can transport an egg from the one location to another is a possible source.

Flies, moths, and spiders all have hair on their bodies (predominantly legs) for the eggs to stick to. As flies feed on feces, it stands to reason that they are of particular risk, the risk of infection from spiders or moths would be negligible.


Can cats get worms from raw meat?

It is unlikely that a cat fed a diet of HUMAN GRADE raw beef, lamb or chicken will develop intestinal parasites. Most worms are host specific or transport host-specific. Also, the processing of meat for human consumption is of a much higher standard than meat for pets. This is why I only recommend human-grade meat for cats.

If you are at all concerned about parasites in raw meat, freeze it for at least 24 hours before you give it to your cat.

There is no way to completely prevent parasitic worms in cats; we can, however, reduce the chances.

How do I know if my cat has worms?

Most cats will remain asymptomatic unless they have a heavy worm burden. A definitive diagnosis can be made via a fecal flotation for intestinal worms or a blood test for heartworm.