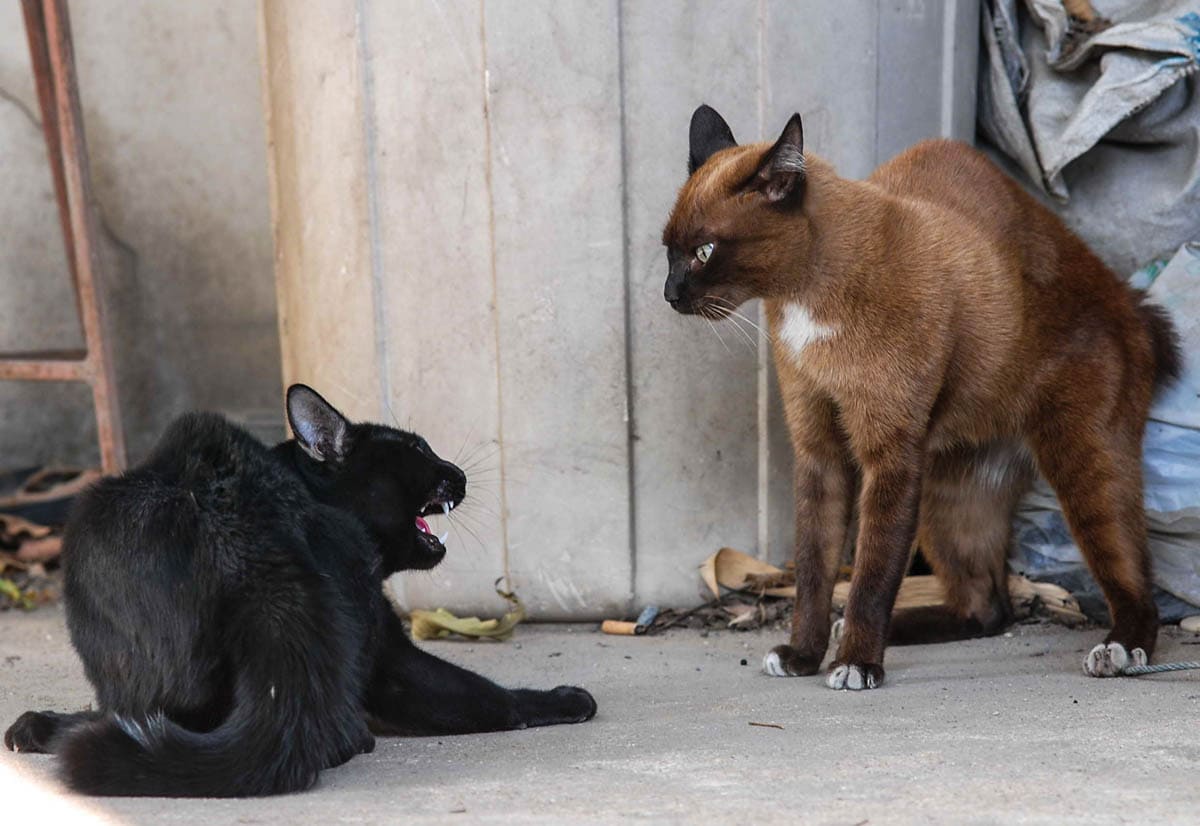 Feline aggression is a serious behaviour with 400,000 reported cat bites in the US every year. One study found that one in three people who received a cat bite required hospitalisation. They may not have large jaws like their canine counterparts, but their teeth are designed to penetrate tissue, which introduces several pathogens under the skin.

There are several types of feline aggression, which include:

Whatever type your cat is displaying, it is essential to address the situation; your first stop should always be your veterinarian to rule out a medical cause.


This can be towards humans or other animals. The cat will crouch down low and slowly move towards his prey until lunging forward and attacking. Cats learn predatory behaviour from their mother and practice on littermates.

Predatory aggression can be dangerous to humans (for example, if you are walking down some stairs and suddenly pounced on), unfair on other pets and cruel on the wildlife. It can also be fatal if the cat chooses the wrong prey, such as a snake.

Keep cats indoors or confined to an enclosure to prevent hunting.

The best way to deal with this type of aggression is to redirect it towards a more appropriate source such as cat toys. Ensure you provide your cat with adequate toys in which to explore his predatory behaviours such as wand-type toys (on a rod with a feather at the end of some string) to chase and soft toys to attack.

Spend 30-60 minutes per day actively playing with your cat, this provides an outlet for excess energy, and you can direct the play fighting towards appropriate toys.


Fear aggression occurs when a cat is put in a situation that makes him feel threatened or scared. It may be a visit to the vet fear of unfamiliar people or an encounter with another cat which leads to fear aggression. Most animals would rather avoid confrontation in fearful situations but will attack if they have no option to escape. Body language displayed during fear aggression is the cat hunched down low, ears back, legs and tail tucked into the body, body on an angle.

Injured cats can also lash out aggressively. Always be careful when approaching a sick/injured cat you don’t know and be careful when handling your cat who may be in pain as he could lash out.

If possible, such as with veterinarians, accustom your cat to visits that don’t involve examinations, even if it is just to pop in, have a vet nurse feed a treat and then leave.

If possible the way to address this is to avoid fearful situations, veterinary visits are inevitable, but if other situations may be best avoided. If this is not possible, then slowly helping your cat adjust is the best course of action. This may involve offering food treats if the cat is fearful of humans, slowly introducing the cat to other pets etc.


This is a common problem cat owners encounter. You are enjoying some time petting your cat, and all of a sudden, he turns around, takes a swipe and then runs off and hides.

The cause of this behaviour is unknown, although it is thought that some cats can only accept a certain amount of petting before becoming uncomfortable.

Being aware of your cat’s body language will help prevent these attacks. We have one cat who will attack if petted too long but he does give off warning signs first. His tail will begin to twitch, his pupils will dilate, and he will start to look around (presumably preparing for his escape), as soon as we notice these behaviours, we stop petting him.


Play aggression is common in kittens and cats under two years of age. As frustrating as it can be towards their human companions, play aggression is quite normal in kittens. This type of attack is predatory and is common among littermates. Not only does it provide exercise for the kittens but also serves as a way to practice and learn predatory behaviour, which in the wild is necessary to hunt down and kill prey. While a kitten’s littermates are happy to engage in this type of behaviour with one another, it is not so enjoyable to us humans or older cats. The good news is that play aggression does taper off as the cat reaches adulthood.

As with predatory aggression, the best way to deal with this type of aggression is to redirect it towards a more appropriate source such as cat toys. Ensure you provide your cat with adequate toys in which to explore his predatory behaviours such as wand-type toys to chase and soft toys to attack.

Spend 30-60 minutes per day actively playing with your cat. This will provide an outlet for excess energy, and you can direct the play fighting towards appropriate toys.

Never use physical punishment on a kitten or cat. This will not discourage play aggression; in fact, it could make the situation worse. It also serves to make your cat fearful of you.


This type of aggression occurs when the cat attacks a person or other animal as a result of arousal from an external stimulus such as a neighbourhood cat in the garden, a bird etc.

If the aggression is a result of a household cat, you will have to work on re-introducing them slowly. If it is an external factor, take steps to discourage the cat from entering your garden. Be aware of the body language on display, and if he seems to be worked up, don’t pet him until he has calmed down.


By nature, cats are not pack animals the way dogs are. Often you will have cats who are close companions, but many cats enjoy their own company and don’t seek out companionship from other cats. Territorial aggression occurs when another cat enters the cat’s territory or when a new cat is introduced to the household.

Discourage cats from coming onto your property. Territorial aggression between two cats in the same household can be helped by separating them and re-introducing them slowly. If this fails, try to provide each cat with their areas may be of help.

Be aware that redirected aggression may occur in the case of a neighbourhood cat entering your garden, so be careful.

Desex all cats to reduce the amount of territorial fighting which occurs.


Inter-male aggression is a common form of aggression in cats. It occurs as the male reaches sexual maturity, around two years of age. It can also become worse during mating season when males vie for females in heat.

Desex all cats, as this can reduce aggression in males.


As mentioned at the beginning of this article, sometimes aggression occurs as a result of a medical condition.


Don’t get between two cats fighting as this can result in serious injury. I have seen one pet owner receive a painful abscess as a result of breaking up a cat fight.

If you do receive a cat bite, see a doctor immediately.

Never physically punish a cat; this will not discourage play aggression; in fact, it an make the situation worse.