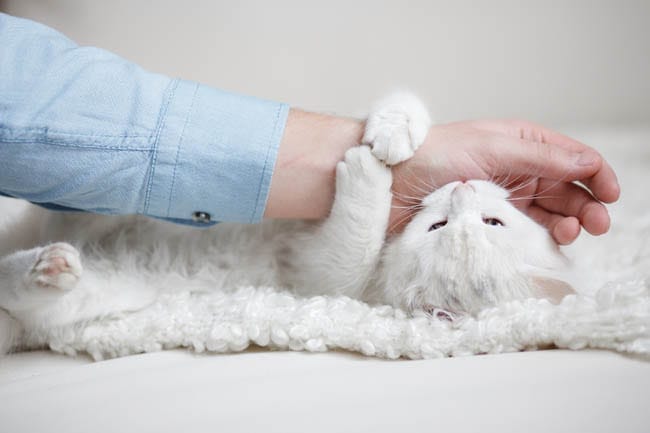 Table of Contents hide
1 Why do cats bite?
2 How to stop a cat biting
3 How to treat a cat bite

Why do cats bite?

There are several possible causes of biting in cats; it depends entirely on the situation at the time. Biting is primarily the result of fear and or aggression. Some cats, especially young ones may also bite as a form of play.

I cannot emphasise enough that this behaviour should not be encouraged. It might be cute when a little kitten nipping you, but when it’s a full-grown cat.

No matter how friendly your cat is, if he is injured or afraid, he is at risk of biting you. He may not even be aware he is doing it which is why an injured, or scared cat should ALWAYS be approached with a great deal of caution.

Breaking up a cat fight:

A very common cause of pet owners being bitten is getting between two cats fighting. This is an absolute no-no. If you need to break up a fight, throw a towel over them, get a broom and gently try to prise them apart, do not use your hands, arms or legs to split them up. That is a recipe for disaster and a trip to the emergency department is a likely outcome.

Once you have broken apart from a cat fight, your cat(s) are likely to be agitated for quite some time afterwards. It is a good idea to maintain some distance between you and your cat(s) until they have had sufficient time to calm down.

Many pet owners think cats having a seizure are at risk of swallowing their tongue. Well-meaning pet owners have been accidentally bitten by sticking a finger in the mouth to stop this happening. A cat will not bite its tongue during a seizure and for your own sake, keep fingers away from a cat having a seizure.

How to stop a cat biting

Start as you plan to continue. Never encourage biting in kittens or cats when playing. Avoid roughhousing them. If your cat does bite you when playing, say a firm no and stop what you are doing. Repeat this until the cat learns that biting means the end of play time.

If you are handling an injured or scared cat, proceed with caution. Even the most placid and laid back cat can bite if scared or in pain. Have somebody on hand to help you, and wear thick gloves and a long sleeved top to help protect your hands and arms.

Read the body language. A frightened, scared or aggressive cat will often display signs such as ears pinned back, eyes wide open and flickering as if looking for an escape route, large pupils, skin rippling, tail twitching.

Remember, hands are for petting, not biting.

How to treat a cat bite 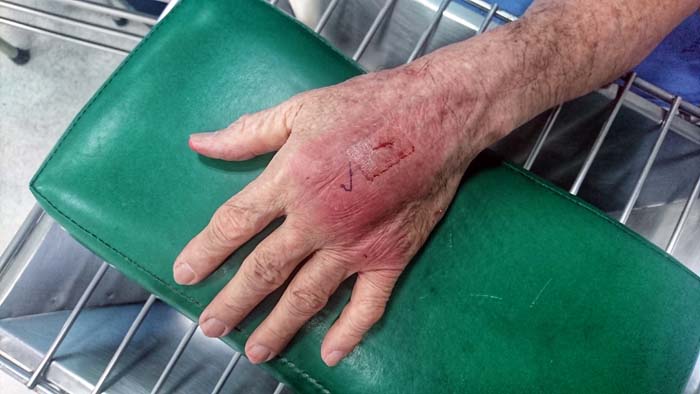 Always take animal bites seriously and see a doctor. Approximately 1 in 170 people in the United States receive a bite from a pet every year. Children are the most frequent victims. Between 40-80% of cat bites will become infected because when a cat bites, their razor-sharp teeth pierce the skin and which introduce bacteria from the cat’s mouth as well as bacteria on the skin into the wound.  Pasteurella is the most common bacterial infection resulting from cat bites and is found in the mouth of between 75-80% of cats.

Signs of an infected cat bite include pain, swelling, oozing or pus, heat, redness in the affected area.

If you are bitten by a cat, wash the area immediately with antibacterial soap and apply an antiseptic such as Betadine. Apply pressure to control any bleeding and then go straight to your doctor. While you are there, ask about a tetanus jab.

Do you know the rabies status of the cat who has bitten you? Rabies is transmissible from cats to humans and is a significant concern. Seek medical attention immediately if you receive a bite from an unknown cat, even if it is minor.