Cat’s eye colours can range from blue to yellow, copper, brown, green and odd-eyes (blue and another colour). Several cat breeds have blue eyes, some of these breeds only have blue eyes, while others can have all eye colours, which include blue. 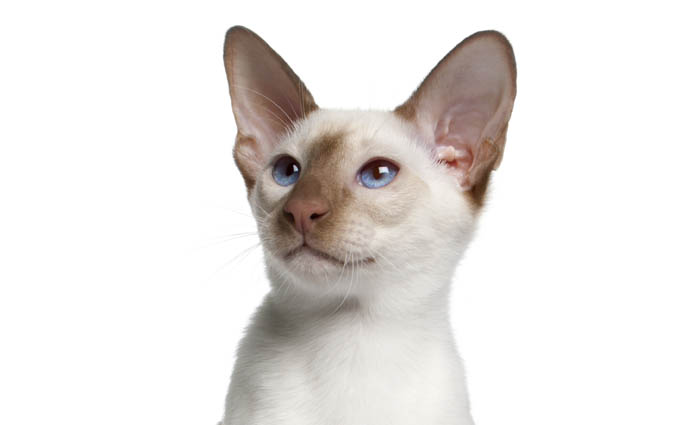 One of the most well known blue-eyed cat breeds, the Siamese is an ancient breed of cat which originated in Thailand. The first two Siamese cats arrived in England from Bangkok in 1884, by Acting Vice-Consul at Bangkok, Mr Gould who gave them to his sister, Mrs Lilian Veley as a present. Pho and Mia are recorded as 1a and 2a in the Siamese Cat Register. Mrs Veley went on to co-found the Siamese Cat Club in 1901.

Siamese cats are extremely intelligent and can form close bonds with one human in the family. They love to follow their human around while giving them a running commentary. 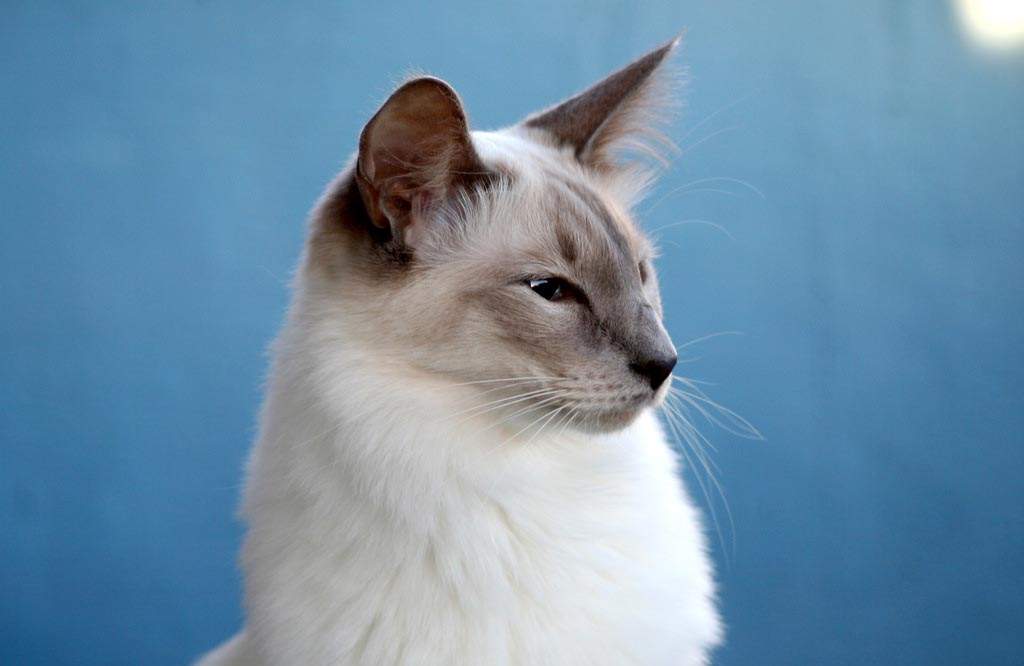 The Balinese is a longhaired Siamese cat which originated in the 1950s. The gene responsible for longhair is recessive, and for a cat to have a long coat, it must inherit a copy of the gene from each parent. Occasionally a long-haired cat would turn up in a litter of Siamese kittens, but these were sold as pets. It is not known if the longhair gene was introduced to the breed at some point or if it occurred as a spontaneous mutation. Marion Dorsey of Rai-Mar cattery in California developed a breeding plan for these longhaired Siamese cats which would sometimes appear.

Balinese cats share many similar traits with their Siamese cousins, including intelligence, loyalty, and playfulness.

Also known as the Sacred Cat of Burma, the Birman is heavy built, long-haired pointed cat whose origins are shrouded in legend. What is likely is that longhaired white cats who lived in an ancient temple in Burma (Myanmar) likely mated with Siamese cats.

The Birman is a sweet-natured, gentle, affectionate and intelligent cat who is more laid-back than other breeds of cat. They make an ideal companion for singles, families with children and retirees. 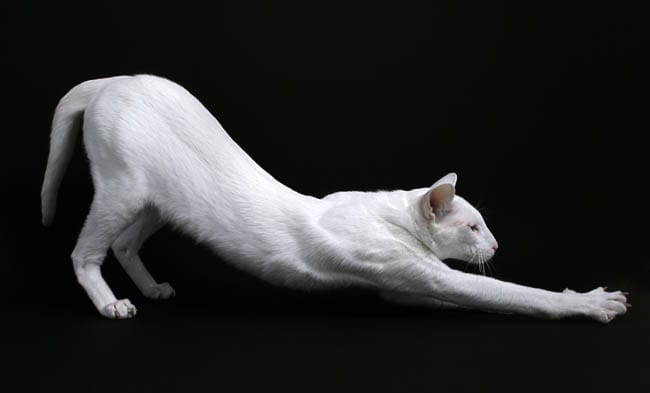 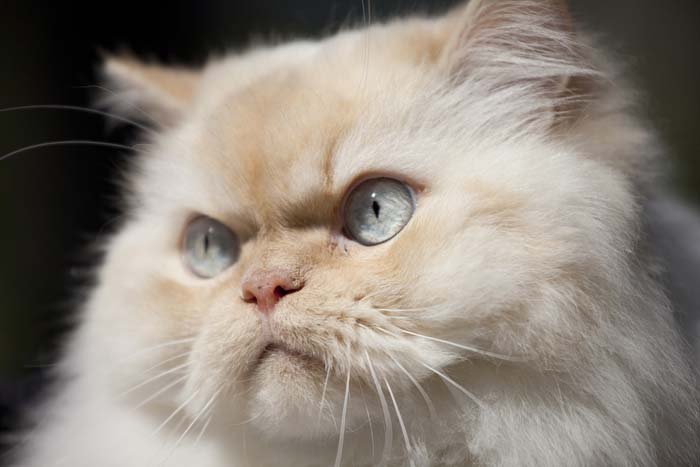 Himalayans are considered Persians with the Cat Fanciers Association; however, other cat councils recognise the Himalayan as a separate breed.

More placid than other cat breeds, Himalayans are sweet and good-natured. Some can be quite talkative, but not as much as their Siamese cousins.

In America, the Javanese is a colourpoint longhair similar to the Balinese, but in the non-traditional colour points such as fawn, red, cream and lynx point. The breed started at the same time the Balinese was in development. From time to time, kittens were born with unusual colour patterns and usually sold as pets. Eventually, it was decided to place these kittens into the category of Javanese.

The Javanese shares a similar personality to the Siamese and Balinese and is intelligent, loyal, curious and will often bond closely with one person in the family. 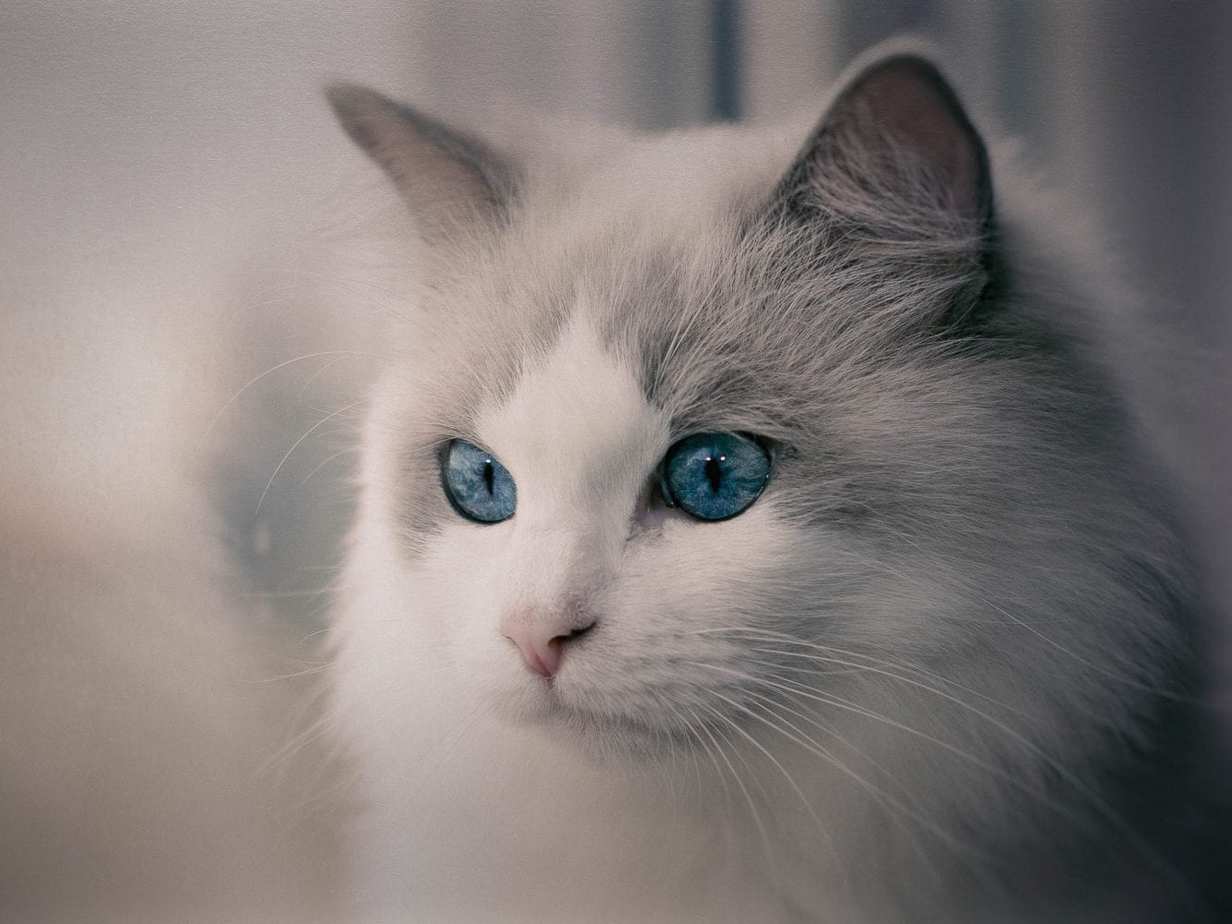 The Ragdoll is one of the largest domestic cat breeds whose history began in the 1960s with a white Persian/Angora type cat called Josephine. Josephine was hit by a car, and Anne Baker was subjected to government testing, which lead to her becoming relaxed and floppy like a rag doll and felt no pain. Josephine went on to produce two kittens (Blackie and Daddy Warbucks) to two sires who were much larger than previous litters and had the same laid-back temperament.

Blackie, as the name would suggest, a black cat and Raggedy Ann Daddy Warbucks (Daddy Warbucks for short), who had a cream coloured coat, with dark points and white mitts. These two males are considered to be the founding fathers of the Ragdoll breed.

Despite claims, Ragdoll cats do feel pain, but due to their relaxed nature, many will be somewhat floppy when picked up. Ragdolls are easy to train and love human companionship. 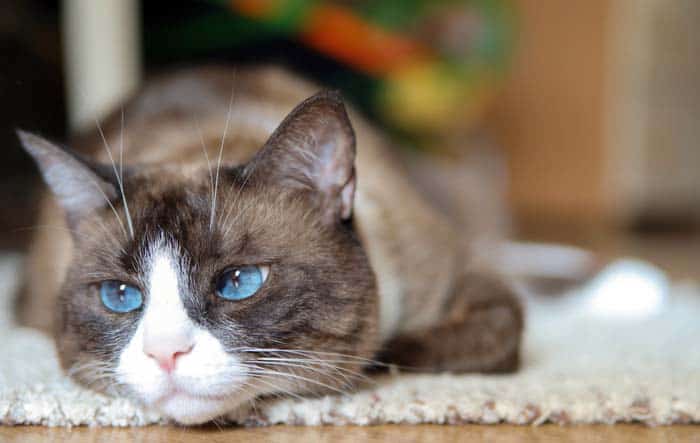 An American breed founded by Siamese breeder Dorothy Hinds-Daugherty of Kensing Cattery. A Siamese of hers gave birth to a litter, all of whom had white feet. Liking the look of these kittens, Dorothy began a breeding programme by crossing Seal Point Siamese cats with bicolour American Shorthairs. The breeding programme was abandoned for a while until Vikki Olander of Furr-Lo cattery took over.

The snowshoe is gentle, loving and affectionate. Their temperament is somewhere between that of the Siamese and the American shorthair. Snowshoes are more vocal than the American Shorthair but less talkative than Siamese.

Other cat breeds with blue eyes

No, they are not rare, although other colours and patterns are more common.

What are white cats with blue eyes called?

Can black cats have blue eyes?

Black cats are born with blue eyes, but the blue eye colour will change to yellow or green from four weeks.