Cats with small ears are adorable. We see pictures on the internet of those with folded or miniature ears and we awww… But you may wonder what causes small ears in cats or what breeds have small ears?

There are cat breeds which appear to have small or nonexistent ears! The most common of these is the Scottish Fold, which is named after their strangely shaped ears. However, the breed’s genetics can produce cats with both straight and folded ear phenotypes.

Folded ears occur because of a genetic mutation which affects the development of cartilage. “N” means the cat carries the normal (straight ear) gene. “SF” means the cat carries the fold mutation. Cats with two copies of the N gene have straight years and cannot pass the fold onto their children. Cats with one copy of each will have folded ears, but may develop other issues related to cartilage. They can pass the fold variant to approximately 50 percent of their children. Cats with two copies of the folded gene have folded ears, but their health issues are usually more severe. They will pass their variant to all offspring.

Can my cat get small ears after birth?

Normally, small ears are a genetic mutation which does not occur after birth. However, there is a phenomenon called cauliflower ear, which creates a similar appearance. But you don’t want your cat to have this, as it’s an irreversible deformity. Cauliflower ear is also known as a perichondral hematoma caused by scar tissue and trauma. Many strays or free-ranging cats gain this trauma through fighting with other cats. 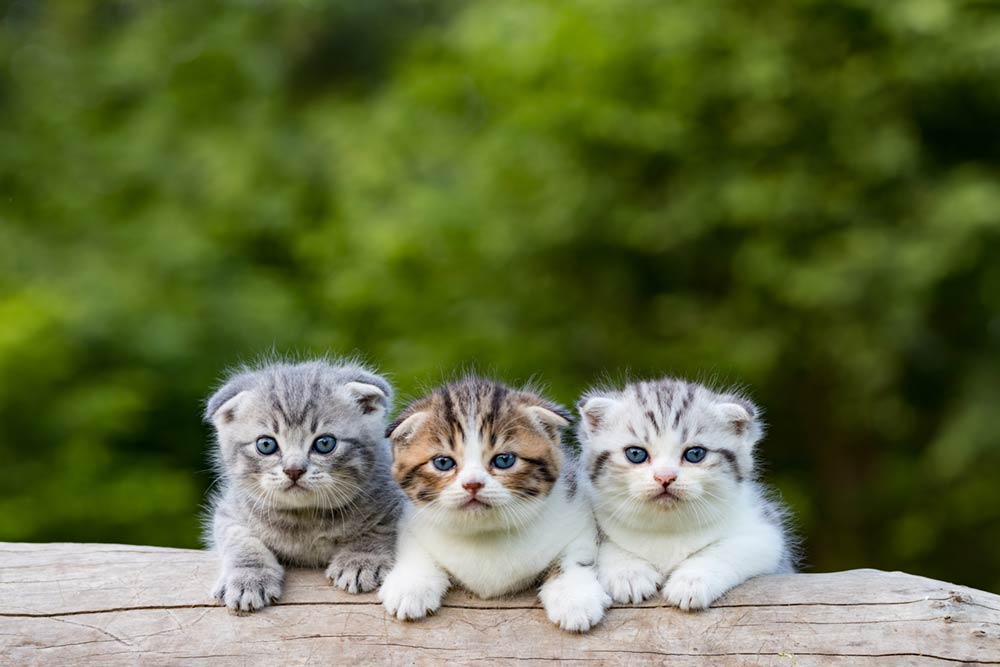 Is it ethical to have a cat with small ears?

While these breeds are adorable, some breeders have stopped mating Scottish Folds and others because of ethical reasons. Cats with the mutation have additional health problems affecting the cartilage and joints. If you’re interested in adopting a cat with small ears, reach out to your local animal shelter to see if they have any. It’s up to you whether you want to adopt from a breeder, but it may be difficult to find due to ethical concerns.

How do I take care of my cat’s ears?

With genetic issues or other ear issues, it’s important to care for your cat’s ears properly. Improper care can increase risk of infection or other complications. While cats are known to keep themselves relatively clean, there are some additional steps you can take if you feel concerned.

You should only clean your cat’s ears if you see a small or moderate amount of debris or discharge. Clean them every two to three months as overcleaning can lead to irritation. You can clean the ear by folding back the flap and using the other hand to hold the ear cleaner. Hold it to the cat’s ear but not inside. Once putting the cleaner inside, massage the base of the ear to be sure it covers it. Then, use a cotton pad to clear out the debris.

Additionally, you should ensure your cat receives a check up approximately twice a year to help prevent any issues.