Table of Contents hide
1 Functions of the tongue
2 Why do cat’s tongues feel like sandpaper?
3 What can cats taste?
4 Cat tongue disorders
5 Cat tongue sticking out

The cat’s tongue is made up of several groups of muscles, which move in various directions. It is unique in that it contains backwards-facing spines (called papillae) which form a barbed surface and act like a hairbrush when the cat is grooming itself.

A healthy tongue is pink in colour. Any change in your cat’s tongue shape or colour can indicate a problem and should be assessed by a vet.

Functions of the tongue

The tongue is amazing; it has many roles, which include: 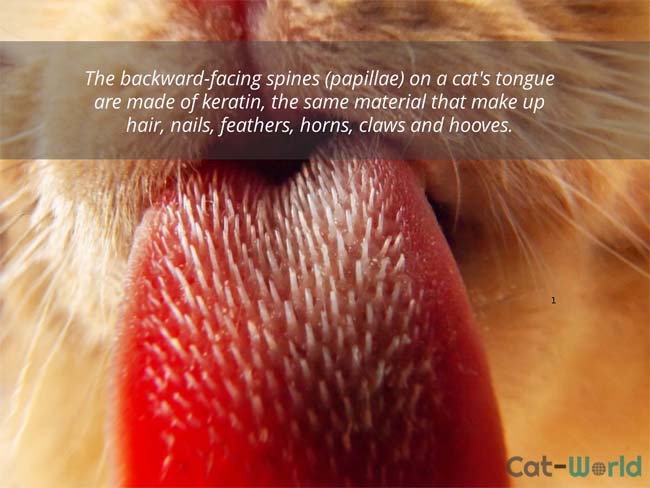 This is due to the papillae on the tongue which are made of keratin.

There are four types of papillae:

1) Filiform papillae (conical papillae), which is the most common form of papillae. These point backwards, which assists with grooming and also help the cat remove flesh from the bones of their prey. They are located on the front half of the tongue. This is what causes the rasping or sandpaper sensation when your cat licks you.

2) Foliate papillae (which means leaf-like) these are the largest papillae found on the tongue. They are arranged in two groups, on either side of the tongue, in front of the circumvallate papillae.

3) Fungiform papillae, as the name suggests, these papillae are mushroom shaped and are found along the sides of the tongue.

4) Circumvallate papillae (vallate papillae), located at the back of the tongue. These dome-shaped papillae are arranged in a V-shaped row behind the fungiform papillae.

What can cats taste?

The cat’s sense of smell is considerably more developed than ours. However, cats have relatively few taste buds, numbering 473, compared to humans who have 9,000. The taste buds are located on the flattened, fungiform and circumvallate papillae but not the filiform papillae. The jury still seems to be out as to whether cats can taste sweet or not. But some now believe they can taste sweet, but it is a very underdeveloped taste compared to that of salt, sour and bitter. The cat’s tongue also has a sensitivity towards temperature; the preferred temperature is around 30C (86F). Many cat owners will be aware that cats do not like to eat food straight out of the refrigerator for this reason.

There are several disorders to affect the tongue, including:

This seems to happen quite a lot, typically after your cat has been grooming or during a nap.  This is perfectly normal and nothing to worry about. He just forgot to put it back in. However, if you notice your cat’s tongue sticking out followed by other symptoms or signs of distress, it is worth a checkup with the vet.

Social media have coined the term blep to describe a cat with its tongue poking out.