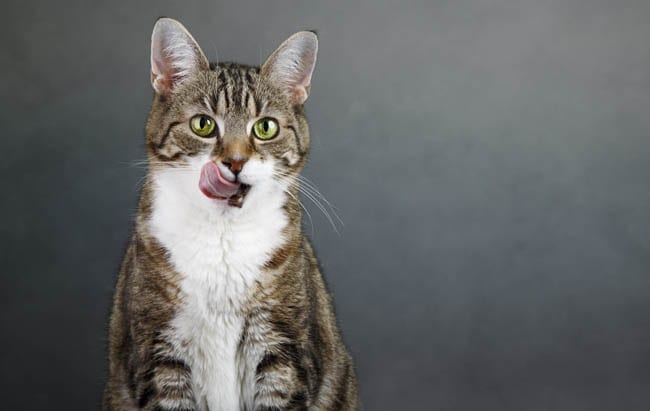 Vomiting after eating is seen quite commonly among cat owners. The occasional vomit after eating is no cause for concern, but if it happens more often than once a week or so it is a good idea to see your veterinarian to rule out a medical problem. There are many medical causes of vomiting in cats, some of which are life-threatening. These may include kidney disease, feline diabetes, hyperthyroidism, gastritis, intestinal obstruction, hairballs, bacterial infection (such as salmonella), internal parasites (worms, giardia, cryptosporidium etc), inflammatory bowel disease, and many more conditions including infection, cancer, and metabolic disorders.

This article refers specifically to the occasional bout of vomiting immediately after eating. Mostly the causes listed below are harmless and easily managed. If your cat is vomiting more than occasionally and/or you notice other symptoms such as diarrhea, weight loss, increased thirst, fever, lethargy, it is important you seek veterinary attention immediately.

Eating too fast and too much

This is particularly common if there is more than one cat in the household. Competing cats will eat as fast as they can, which then results in vomiting almost immediately afterwards. If this is a problem in your house, try separate feeding stations. If your cat is an only cat, feed small amounts of food but more often. So, instead of 2 wet meals a day, give him 4. Many cat owners will also leave dry food out for their cat to graze on, so that they can eat when peckish, instead of being ravenous at mealtimes.

Technically this is not vomiting but regurgitation. The esophagus is the muscular tube which connects the mouth to the stomach. When your cat eats, wave-like contractions occur in the esophagus which pushes food down to the stomach (this is known as peristalsis). Megaesophagus is an enlargement of the esophagus which results in food not being propelled down towards the stomach, instead, it sits in the esophagus before being regurgitated back up. Regurgitated food looks the same as it did before being consumed compared to food which is vomited up, which has a more sausage-like appearance. Siamese and related breeds are more prone to this disease.

Cats in the wild stalk and hunt their prey. Once they have killed and eaten their prey, they groom themselves, followed by a sleep. Cats fed in the home may eat a large meal and then jump around and play. Playtime is great but should be in this order: play, feed and sleep. If you do want to play with your cat after a meal, then give him 30-60 minutes before you do.

Just like humans, cats can also get reflux. It can happen to cats of all ages but is most commonly seen in younger cats. There are a number of causes including a hiatus hernia, not fasting your cat prior to anesthesia, improper positioning during anesthesia. Chronic reflux can lead to irreversible damage to the esophagus, which is why it is important to have any recurring vomiting seen to by a veterinarian. Most causes are relatively benign, but not all.

Cats are generally quite fussy eaters but from time to time they can consume something that disagrees with them resulting in vomiting it straight back up.

Intolerances are different to allergies. An extremely common dietary intolerance in cats is from cow’s milk as cats lack the required enzyme to digest the lactase in the milk. Vomiting and diarrhea are common symptoms of food intolerances in cats. Obviously, avoiding the food or drink which causes intolerances is the best way to go. Some cats can drink cow’s milk without any problems but many can’t.

Any blockage in the stomach or intestines will lead to vomiting among other symptoms. There are a number of cause of gastrointestinal blockage including ingestion of a foreign body, hairballs, tumours. An intestinal blockage is life-threatening and must be seen by a veterinarian urgently. Treatment usually requires surgery.

Cats are sensitive to sudden changes in diet and this alone is enough to cause vomiting. If you do want to change your cat’s diet, do it gradually, over a few days. Begin by mixing in a small amount of the new food with the old food, and over time add more of the new food and less of the old food. This should take 5-7 days to complete.