Laser pointers are a popular addition to the feline home; the laser mimics an insect or animal on the move, which stimulates the cat’s predatory response to stalk and chase the target.

Cats in the wild spend a large chunk of their day hunting. Domestic cats have the luxury of food on call, but those wild instincts remain. Inactivity can lead to boredom and obesity, which is linked to many health risks. Interactive play is a great way to provide both physical exercise as well as mental stimulation for our cats. This is especially important for indoor-only cats.

Laser is an acronym for Light Amplification by Stimulated Emission of Radiation, and emit a narrow beam of light. They have a wide range of uses from barcode scanners, whiteboard pointers to medical equipment.

Laser pointers have been in the news in recent years with people pointing high-powered lasers at planes which can incapacitate pilots and put the lives of hundreds of people at risk. One pilot received significant eye damage due to a burned retina when a military-grade laser was shone in his eye during a landing at Heathrow airport in London. What actually leads a person to engage in such a stupid and dangerous act is beyond me.

Pros and cons of laser toys 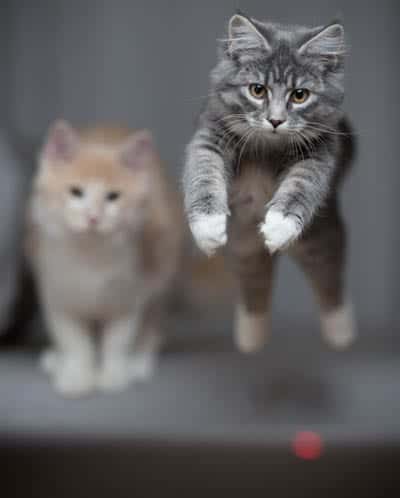 Play therapy is so important for cats, and we highly recommend pet owners find at least ten minutes a day for interactive play, preferably at the same time.

Laser pointers stimulate the cat’s predatory response of stalk and pounce without a poor animal losing its life.

The cat’s natural hunting cycle is > stalk >pounce > kill > eat. Laser pointers don’t provide the opportunity to catch and kill the target which can frustrate the cat.

Provides a great opportunity to exercise, burn up energy and help keep the cat’s weight within a healthy range.

Can permanently damage the retina, at the back of the eye if the cat stares at it for too long.

Play is important for kittens to hone their coordination skills and maintains fitness in adult cats.

To avoid frustrating the cat, use a laser pointer with toy mice.

Alternatively, use a clicker in conjunction with the laser pointer. When the cat ‘catches’ the light, provide a treat.

The US Food and Drug Administration (FDA) classifies lasers, the higher the number, the more powerful the laser. Across the Atlantic, the United Kingdom government also have their own classes standards, which are different to the FDA ones. As a guide, stick to classes one and two. 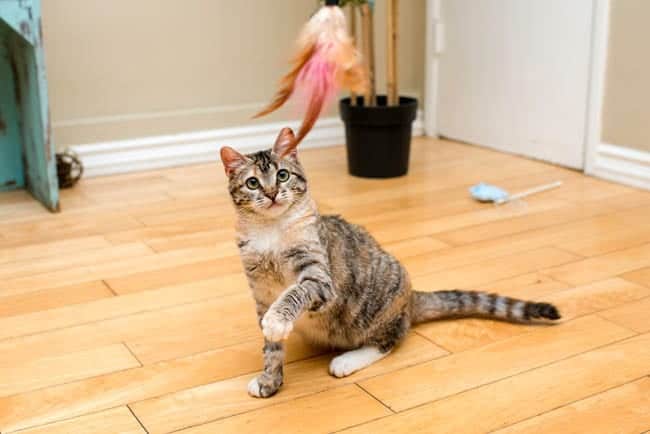 Wand toys offer a similar play style of stalk, pounce and kill, therefore provide the opportunity for the cat to kill its target; the owner can then give a treat or a meal, which completes the entire cycle.