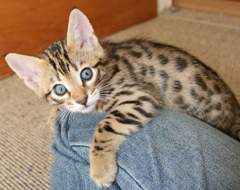 The Cheetoh is one of our newest man-made breeds of cat that came about by crossing a Bengal to an Ocicat.

In 2001 Carol Drymon of Wind Haven Ranch came up with the idea of crossing an Ocicat with a Bengal to create a wild looking cat without adding wild blood to the gene pool, by combining the best of both the Bengal and the Ocicat. The first litter of kittens arrived in 2003. Other breeders have now become involved, and the breed is slowly in numbers and popularity.

The breed is still relatively new to the cat fancy and is not currently recognised by all of the cat registry bodies. It is presently on the TICA registry as an experimental breed and was accepted by the UFO (United Feline Organisation) in November of 2004. 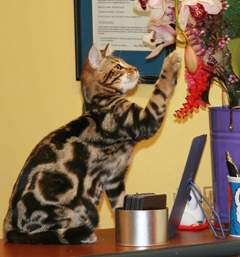 The Cheetoh is large and well-muscled but lithe and elegant with an athletic body. The hind legs are slightly longer than the front legs, giving the breed a low slung gait.

The coat is short, sleek and thick but exceptionally soft to the touch. Well defined spots or rosettes against a lighter background. The Cheetoh comes in the following colours and markings:

The head forms an equilateral triangle with large eyes and ears.

Adult males can weigh up to 8kg (18 lbs), females are usually smaller. 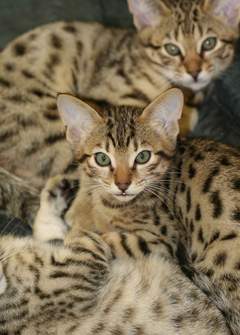 The Cheetoh is an intelligent breed of cat. They are friendly, outgoing and social. Common words used to describe the Cheetoh include affectionate, dog-like, curious, gentle and mild-mannered.

Due to their intelligence, they are easy to train to do tricks such as play fetch and come when called; they are very adaptable to walking on a lead also. Their activity level is high, so it is advisable to give them plenty of playtime to burn off some of that energy.

They need a lot of attention and don’t do well on their own, so if you are out for long periods consider getting two cats.