What is a chimera cat?

A chimera (pronounced ky-meer-uh) cat is a cat that is made up of two distinct sets of DNA which occurs when one fetus reabsorbs its fraternal twin while in the mother’s womb. These cats have different colours on either side of their faces. 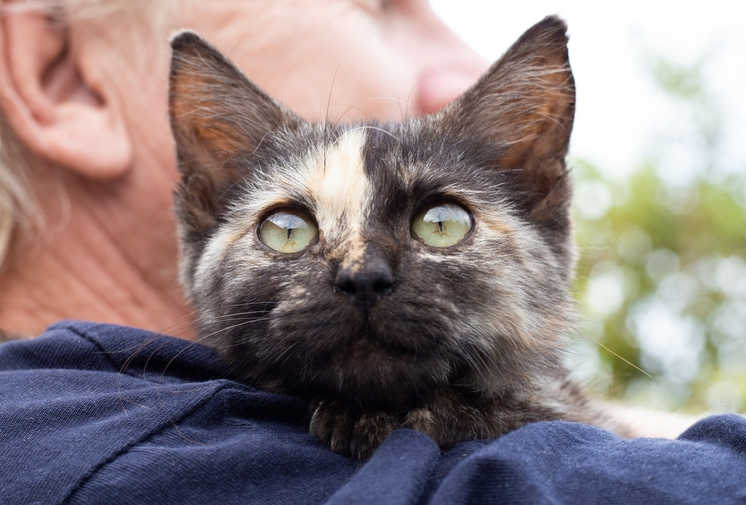 Famous chimera cats… or are they?

Interest in feline chimeras has recently grown due to the social media popularity of Venus, Quimera, and Narnia de la grace. 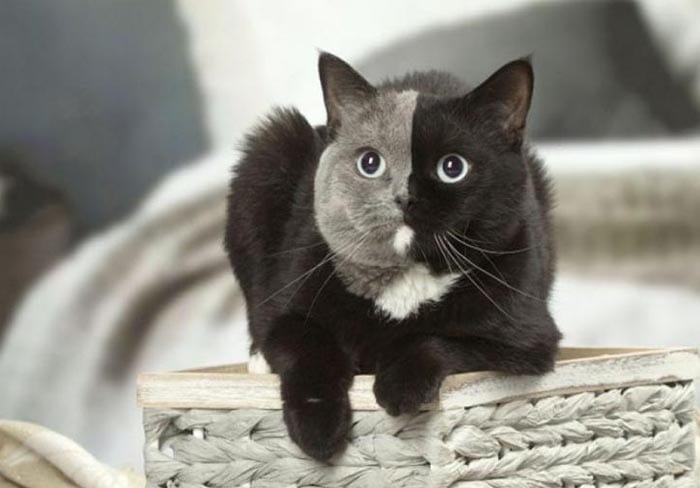 Narnia is a little more interesting because he is a male cat with a face that contains one half black fur and one half blue fur. Black is dominant over dilute blue, and therefore these two colours should not appear together. A likely explanation is a somatic mosaicism. In the mosaic cat, cells originate from one original embryo, but a mutation or abnormality occurs in a cell of the developing embryo resulting in a block or blocks of cells genetically different from the rest of the embryo. The embryo develops into a kitten with two distinct cell lines. So, the cat may be genetically blue, but the distinct cell line may affect the hair and produce spots of black.

At the time of writing, genetic testing hasn’t been performed on any of these famous cats to confirm they have two distinct sets of DNA, and it is unlikely that these cats are true chimera cats. What is more probable is these unique facial markings are caused by the randomness of X inactivation.

At 2.1 million followers on Instagram, VenusTwoFacedCat is a social media cat-fluencer everybody should check out.

Venus is a beautiful example of a half-black, half-orange-faced chimera. She has the stunning one green and one blue eyes coloring. With a merchandise line, Venus is hands down one of the most famous chimera cats worldwide.

Quimera and Narnia de la grace have also reached celebrity status on social media. These popular cats are also known as ‘two-faced or split face‘ cats due to their unique faces which are made up of two colours split equally down each side. Apricot, an orphaned kitten rescued by Nashville Cat Rescue is also reported to be a chimera.

Venus and Quimena are calico cats, and while their coat patterns are certainly unique, it is unlikely due to chimerism. The heterochromia is likely due to the presence of the white spotting gene.

The focus of this article is tetragametic chimerism, the rarest form.

What are the signs of chimerism in cats?

Tetragametic chimerism is hard to diagnose in cats. In order to confirm the cat is a chimera, two distinct populations of cell lines would need to be identified from different parts of the body. Most pet owners will never have the need to DNA their cats and if they do, most DNA tests only take samples from one location (usually a cheek swab). The less dominant set of DNA may only be confined to a minute part of the body, evading diagnosis.

Signs a cat may be a tetragametic chimera include:

Heterochromia is a condition in which the cat has one blue eye and one green eye. The most common cause of heterochromia in cats is the white masking or the white spotting gene which inhibits the production of melanin in certain areas of the body. Mosaicism and chimerism can also potentially cause heterochromia but are rare.

The cat has both male and female genitalia or ambiguous genitalia.

Because she has two x chromosomes, each cell in the body turns off one copy of the x chromosome (known as lyonisation or x inactivation). Therefore her coat pattern will express both O (orange) and o (non-orange) at random. The only way a male cat can be a calico is if he is a chimera, or more likely an extra X chromosome (xxy), which is a condition known as Klinefelter syndrome.

This is more apparent in people who tend to have fairly monotone skin and hair colour. More than one coat colour in cats is common and more often caused by coat genetics such as tabbies who have areas of dark fur with a striped base colour, white spotting gene, partial albinism (pointed cats), and lyonisation in female cats.

Chimera cats are eye-catching, that’s for sure!

But beyond their interesting and unique physical appearance, here is a list of four more fun facts you might not know about chimera cats.

4. Lastly, the word “chimera” has a fascinating origin. It comes from a Greek word that literally translates to mean “she-goat,” thus painting the image of a mythical fire-breathing monster. Similar to the chimera cat, this beast was also a “hybrid.” Hench, the chimera name!

Can a chimera cat be female?

Yes. A chimera cat can be either a male or female.

Do chimera cats have chimera kittens?

It is unlikely that a tetragametic chimerism cat would produce chimera kittens. Chimerism occurs when two zygotes fuse and form one individual. A mother chimera might possibly be able to pass on some genetic material that made her a chimera, but this is in no way guaranteed.

There is nothing inherently in the DNA of a chimera cat that would make them sterile. Chimera cats can (and do) have kittens. It’s just that their offspring will not necessarily be a genetically rare chimera, like the mother or father cat.

How common are chimera cats?

We don’t know how common chimera cats are because most domestic cats will never be tested for chimerism. Yet, judging from social media, these cats occur far less frequently than many popular breeds.

No, calico and tortoiseshell cats are not chimeras. Occasionally, a male cat with calico/tortoiseshell coloring will also be a chimera, but these are not one and the same. Without testing, there would also be no way to tell. Additionally, tortoiseshells are almost always female.

What is the difference between a chimera and a Janus cat?

Medically termed craniofacial duplication, a Janus cat has a face that is fully or partially duplicated. This is due to abnormal activity by the sonic hedgehog (SHH) protein. SHH and its equivalent gene play an important role in signaling craniofacial patterning during early development. The Janus cat has one set of DNA while the chimera cat contains the DNA of two different individuals.

Can other animals be chimeras?

Chimerism isn’t limited to cats. Other species such as butterflies, parakeets, dogs, rats, and even humans can also contain the cells of two or more individuals.

How do I groom and care for a chimera cat?

When it comes to grooming a chimera cat, it’s fairly straightforward. Since all breeds can be chimeras, simply base your grooming routines around their coat type. Once weekly brushing to keep tangles down is the minimum for shorthaired chimeras.

Furthermore, don’t forget to clean the eyes, ears, and teeth.

Can humans be chimeras?

Yes, humans can be chimeras. There have been several high-profile cases of human chimerism. During her third pregnancy, Lydia Fairchild separated from her partner Jamie Townsend and applied for government assistance. Genetic testing showed that Jamie was the father but Lydia was not. Lydia was accused of fraud and threatened with the loss of her children.

The case was solved when Lydia’s lawyer, Alan Tyndall heard about a case published in The New England Journal of Medicine in which Karen Keegan was also found to have different DNA from her children. Karen was later found to be a chimera. DNA in cells from a cervical smear matched those of her children.

How much does a chimera cat cost?

The answer to this question is…it’s complicated.

It is extraordinarily difficult – almost impossible – to breed chimera cats. That’s because breeders have no control over how the DNA of the embryos merges together. The chimera phenomenon cannot be planned in advance. It is a genetic anomaly that is rare and almost always goes undiagnosed.

As such, it isn’t possible to speculate on the cost of a tetragametic chimera cat. The only way to determine if a cat is a chimera would be DNA testing from multiple tissue samples which would be invasive, expensive, and unethical to do unless there was a medical reason to do so.

Do chimera cats have health problems?

There is very little information or research on chimerism and its impact on the health of affected cats. Specific health issues could potentially be a problem for a cat that carries two sets of DNA. Singer Taylor Muhl is a chimera who has spoken out about her autoimmune issues and allergies that are the result of her body’s immune system reacting to the DNA of her absorbed fraternal sister.

How do I know if my cat is a chimera?

The only way to determine if a cat is a chimera is through genetic testing. Multiple tissue samples would need to be evaluated to look for evidence of different populations of DNA.

In Greek mythology, the chimera was a fire-breathing monster with a lion’s head, a goat’s body, and a serpent’s tail.