Cornish Rex at a glance

The story of the Cornish Rex begins in Bodmin Moor, Cornwall. On 21st July 1950, a tortoiseshell cat by the name of Serena and owned by Mrs Nina Ennismore gave birth to a litter of five kittens. One red and white coloured kitten in this litter had an unusual curly coat. The kitten was named Kallibunker (Kalli)and was to become the founder of the Cornish Rex breed

Nina Ennismore’s veterinarian suggested she contact geneticist A C Jude. He advised she mate Kallibunker back to his mother. This mating produced three kittens. A straight coated female and two curly-coated males. Sadly, one of the males died at seven months of age, but the second male named Poldhu (along with Kallibunker) went on to sire further litters. The early Cornish Rexes were outcrossed to domestic cats.

This is where the history of the breed temporarily splits.

Cornish Rex in the UK

Sadly in 1956 due to financial costs and a large population of 40 cats, Nina Ennismore had a number of her cats put to sleep, including Kallibunker and his mother, Serena.

By the late 1950s, Nina Ennismore had stopped breeding Cornish Rexes. Brian Sterling-Webb continued to work with the breed. By this time, there were only two male Cornish Rexes left in Britain. One of whom was Poldhu. He was a tortoiseshell blue-cream-and-white male. This is rare in males, and when it does occur, they are almost always sterile. A veterinarian took a tissue sample from Poldhu for research. Unfortunately, he was accidentally castrated. Ironically, the tissue samples taken from Poldhu were lost. It is now believed that Poldhu was a chimera.

This left one remaining male Cornish Rex in Britain, Sham Pain Chas. Due to heavy outcrossing, the Cornish was losing its slender type. The great-great-great-grandson of Kallibunker, a blue boy by the name of Rio Vista Kismet and bred by Miss Jeanne Jeffrey of Calgary, was imported from Canada by Mrs Alison Ashford. Kismet managed to enable breeders to bring back the Cornish Rex to its original slender type.

In 1960 to celebrate ten years of the Cornish Rex The Daily Mirror ran an article on the breed, with a photo of a winking kitten. The article said that the kitten (Du-Bu Lambtex) was the only curly coated kitten in Britain. A lady by the name of Miss Beryl Cox contacted the paper to say that she too had a curly-coated cat named Kirlee. Believing that Kirlee also carried the Cornish Rex gene, Brian Sterling-Webb arranged for Kirlee to be sent to Cornwall to be a part of the breeding programme.

When mated to several Cornish Rex females the offspring came out straight coated. It was concluded that Kirlee’s mutation was different from that of the Cornish Rex and the two recessive genes were named: Gene 1 (Cornish Rex) and Gene 2 (Devon Rex).

Cornish Rex in the USA

In 1956, Life magazine published an article on Cornish Rexes which generated much worldwide attention and the following year Frances Blancheri of California imported Lamorna Cove who was pregnant by her father Poldhu at the time. She went on to have a litter of 4 kittens.

I will finish with a quick timeline of the Cornish Rex history.

Wedge-shaped and is longer than it is wide, it has high cheekbones and a roman nose. The ears are set high on the head, but should not be too close together. The eyes are oval and come in brown, green, yellow, gold and blue.

Medium in size with a short coat and slender build. The legs are long, and the body curves upward from the ribs, for the so-called tuck-up. The tail is long and tapering. Although it is a fine-boned cat, it is quite muscular.

The coat is wavy (Marcel wave) in appearance with curly whiskers and eyebrows. The typical cat has three types of hair, guard hairs, awn hairs and down hairs (the undercoat). The Cornish Rex coat completely lacks the guard hairs, with the awn and down hairs giving the coat an incredibly soft feel.

The Cornish Rex is a quiet, outgoing and active cat. Their friendly disposition means they like to be a part of the family and don’t like to be left out of day to day life.

The Cornish Rex has a high energy level and love to play well into adulthood. They are an acrobatic breed who like to be up high.

Cornish Rexes are extremely intelligent cats and very affectionate, they get along with other pets and children.

All cats have health problems; although the Cornish Rex is generally a healthy breed, they can  have a higher incidence of the following:

The Cornish Rex has no special requirements; they don’t shed as much as other breeds due to their short coat. 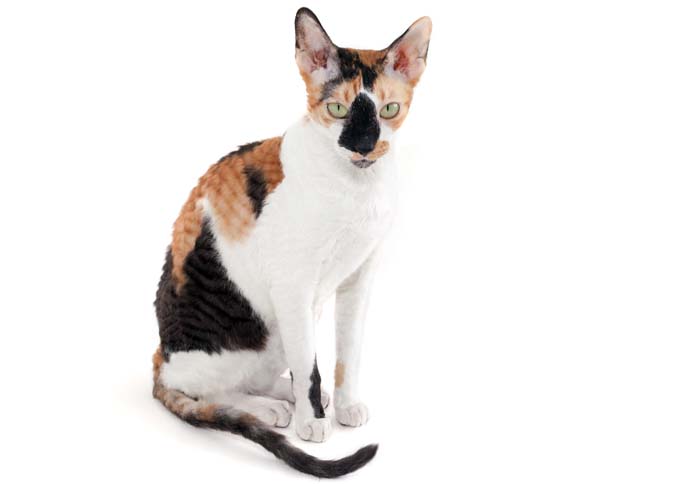 Active households. Cornish Rexes thrive on company, if you are out of the house for extended periods, consider adopting two cats. They get along with other family pets, including dogs and are great with children. 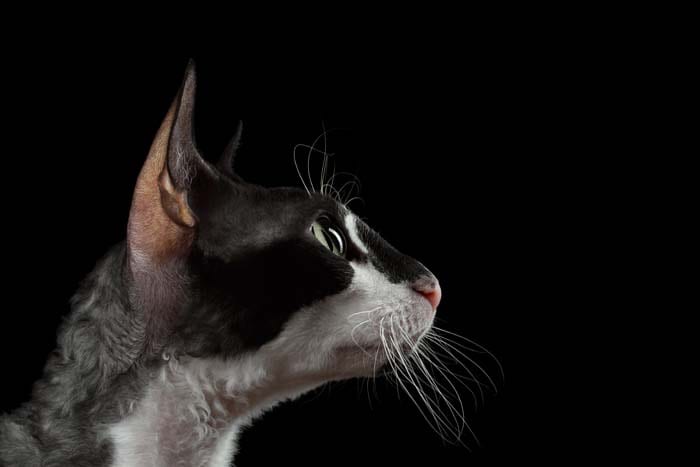 In truth, a rex cat is no different from any other cat and produces allergen like all other cats. They are not hypoallergenic by any means, as claimed by some. Then why do some people seem to have no allergic reaction to rex cats?  One possible hypothesis is that as rex cats have less hair to shed, they simply deposit less allergen-laced hair around the home. But, whatever the reasons some allergic people seem to tolerate them. From personal studies and observations by Margaret Lawrence in the UK, she found that around 10% of people allergic to cats tolerate rex cats.

Please, before you race out and look for a rex cat, remember you should always test your allergies by visiting home or catteries that only own rex cats, and test continuously over several weeks or months.