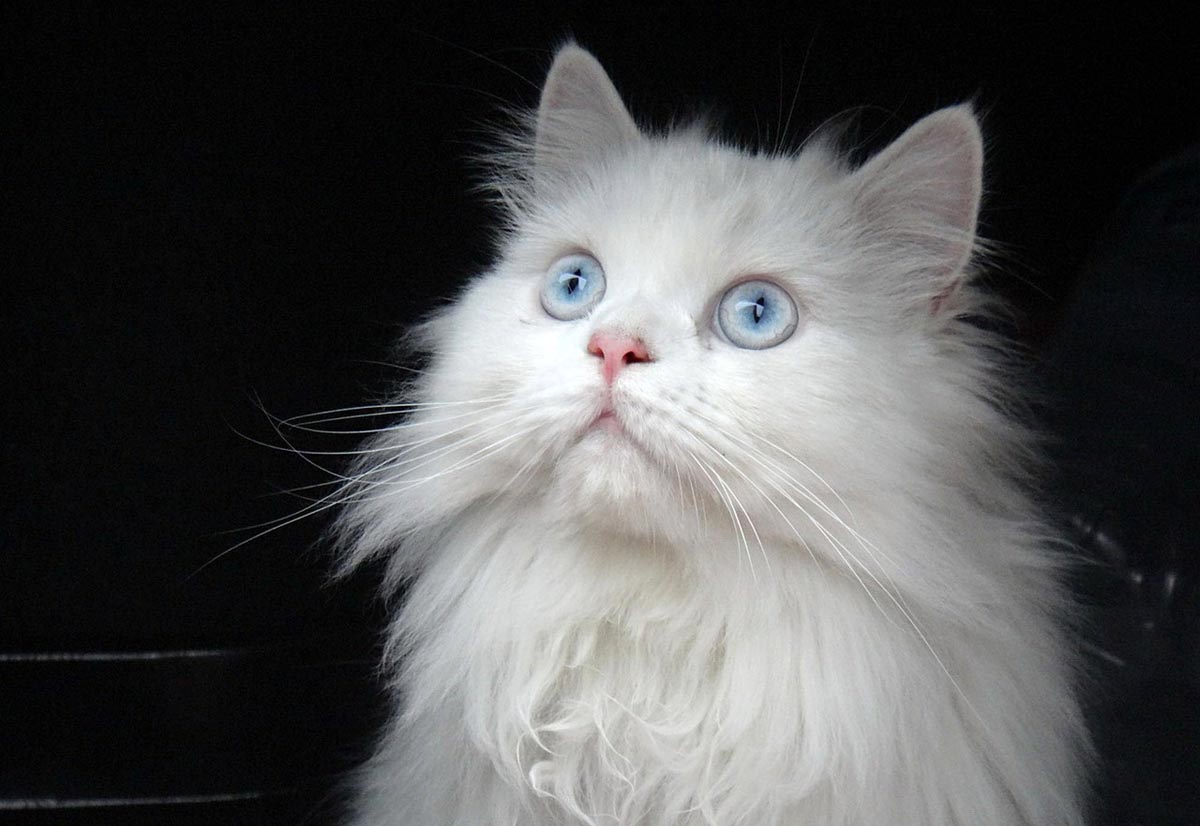 Deafness in white cats with blue eyes is a form of congenital deafness medically known as unilateral or bilateral congenital sensorineural deafness. Dominant (epistatic) white is a masking gene that overrides all other coat colours and is symbolised with the letters WD. Affected cats could have an underlying coat colour, but the WD gene completely suppresses its expression resulting in white fur.

Feline endogenous retrovirus (FERV1) is responsible for the WD and white spotting (WS) mutations. Analysis of the KIT gene found a full 7125bp insertion results in white spotting while a partial insertion results in dominant white. The KIT gene is responsible for encoding the receptor tyrosine kinases protein known as tyrosine-protein kinase KIT. Receptor tyrosine kinases transmit signals from the cell surface into the cell through a process called signal transduction. Signalling pathways stimulated by the KIT protein are responsible for many cellular processes including the production of reproductive cells, hematopoietic stem cells, mast cells, interstitial cells and pigment-producing melanocytes.

The WD gene is pleiotropic (a gene that has different effects), and exhibits complete penetrance for the absence of coat pigmentation by disrupting replication and migration of pigment cells known as melanocytes into the hair, and incomplete penetrance for hereditary deafness and iris colour. Cats can have odd eyes (one blue and one yellow or green), or both eyes can be the same colour (blue, yellow or green). Deafness can occur in one ear, both ears, or in some cases, suffer partial hearing loss.  Felines with unilateral deafness are always deaf on the same side as the blue eye.

Ear degeneration is caused by suppression of the melanocytes in the stria vascularis, a specialised epithelial structure on the outer wall of the cochlea that is responsible for secreting potassium ion (K+) into the endolymph, which establishes the endocochlear potential that is essential for the normal function of the auditory receptor cells. Melanocytes are the only cell in the stria vascularis to express the potassium channel protein KCNJ10, which provides the structural basis for the rate-limiting step that establishes the endocochlear potential.

Deafness and white coats have been reported in mice, rats, mink, dogs, pigs, alpacas and horses and with an etiology similar to Waardenburg syndrome type 2a in humans.

How is deafness tested in cats?

The veterinarian may make a tentative diagnosis of deafness during a routine examination by standing behind the cat and making a loud noise.

BAER (brainstem auditory evoked response) testing is the most reliable method of diagnosing deafness in cats. This test uses small electrodes to measure the electrical response of the ear. A stimulus (usually clicks) are used to stimulate the cells within the inner ear,  which trigger impulses along the auditory nerve. In the cat with normal hearing, waves can be seen on the computer screen as the nerves fire, however, in the deaf cat, there will be a flat line.


Do all white cats with blue eyes carry the W gene?

No, not all white cats carry the WD gene and associated deafness.  The white spotting gene and albino gene can also produce white cats with pink, blue, yellow or green eyes.

There are four known albinism alleles, all of which are recessive to full colour (C). This means the cat must inherit two copies of the gene (one from each parent).

cb and cs are associated with the pointed coat pattern seen in Siamese and Burmese cats. The extremities (face, ears, nose and legs) have dark points and the body is lighter. Tyrosinase is an enzyme that controls the production of melanin in the hair, skin and eyes and normally works at body temperature. In the pointed cat, tyrosinase can only function below certain body temperatures, resulting in reduced pigment on the warmer parts of the body.

cb and cs have incomplete dominance and progeny of matings between cb and cs will produce intermediate progeny. This genotype is known as Tonkinese.

There is little information on true albino cats (ca or c) due to its rarity. Albino cats (also known as recessive white) have been reported in cats, and have pale blue irises, which indicates the presence of a small amount of pigment) or pink eyes. Blue-eyed and pink-eyed albino is recessive to both cb and cs. Due to the small amount of pigment, or complete lack of pigment, the true albino cat often displays sensitivity to light (photophobia). All white cats are also at increased risk of skin cancer.

How do I know which gene is responsible for white? 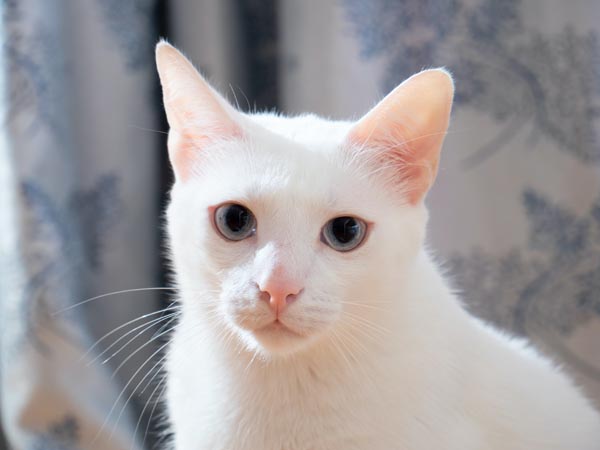 As we know, different genes can contribute to the white coat in the domestic cat. The only way to conclusively establish the gene responsible for the white coat is through genetic testing. Most pet owners won’t need this information, and BAER testing can confirm if the cat is deaf or not. However, this information is important to breeders. Many cat associations do not permit showing deaf white cats, and they should be removed from breeding programmes to prevent passing on the trait to further generations.

Dominant white (WD) is present in random-bred (moggies) cats as well as some purebred cat breeds. Affected breeds include:

Because the gene is dominant, all cats who inherit one or two copies of the gene will be white, and non-white cats will not be affected by deafness.

What is the prevalence of deafness in white cats?

Not all white cats who inherit the WD are deaf. Researchers have found the following:

Always ensure the breeder has BAER tested white cats with blue eyes and can provide proof of hearing. Shelters may not have the funds to BAER test kittens and cats in their care. It can be hard to determine deafness in a litter of kittens as they tend to follow each other’s cues. To check for deafness, it is better to remove the kitten from his or her littermates, stand behind the kitten and drop something to see if he or she responds. However, this method is not a reliable replacement for BAER testing.

Why is there so much interest in white blue-eyed white cats?

There have been a few studies into the pathogenesis of inner ear degeneration in white cats with blue eyes as their hearing apparatus is similar to that of humans. This has helped researchers with the ongoing development of cochlear implants.

All kittens are born deaf, and their hearing begins to develop from the second or third week. Congenital deafness in white cats will be evident within a few weeks of birth.

Deaf animals can live just as happy a life as cats hearing cats and adapt well to living without hearing. Due to the risks from traffic, deaf cats should be kept indoors, or given access to a safe cat enclosure. Pet owners can teach deaf cats visual cues or basic sign language as a way to communicate.