The Devon Rex is a small to medium breed which arose from a spontaneous mutation in 1959. Devons are known for their unusual curly coat and pixie-like appearance. 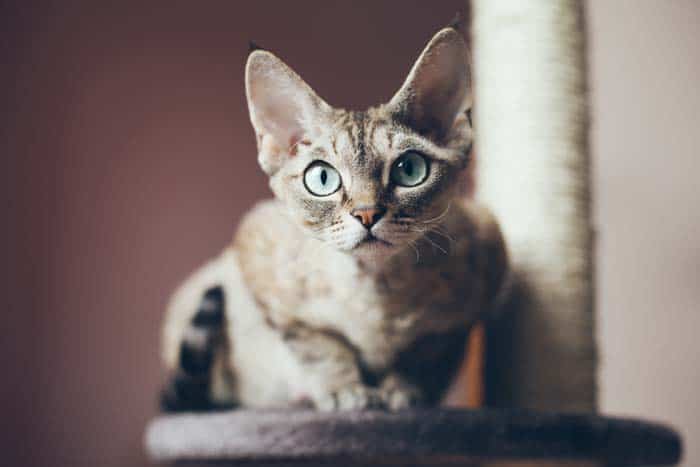 In 1959 Miss Beryl Cox became aware of a stray tomcat with an unusual short and curly coat who was living in a deserted tin mine near Buckfastleigh in Devon.  At this time, Miss Cox happened to take in a straight coated tortoiseshell and white female stray who was pregnant. In September 1959 she delivered four kittens at the bottom of Miss Cox’s garden, one of which had the same curly coat as she’d observed in the stray tom. She named the male kitten Kirlee and planned to keep him as a pet. 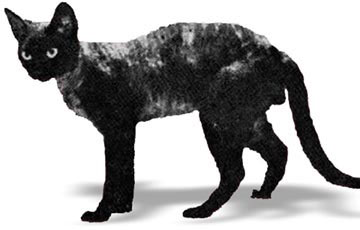 In 1960, Miss Cox read a newspaper article which included a photo of a curly-coated Cornish Rex (discovered ten years previously). The article was for an up and coming cat show and included was a photo of a curly-coated kitten by the name Du-Bu Lambtex. It went on to say that she was the only curly coated cat in Britain. Miss Cox wrote to the breeder of the kitten, Agnes Watts explaining that she too had a curly-coated cat. It was presumed that Kirlee carried the same gene as that of the Cornish Rex.

Work began to establish both the Cornish Rex and the Devon Rex as unique breeds. Kirlee went to live with a member of the Cornish Rex group by the name of Mrs P. Hughes. She mated Kirlee to one of the straight coated females by the name of Broughton Purley Queen. The litter comprised of three kittens, two were straight coated, and one female (Broughton Golden Rain) was curly-coated like her father -and so the Devon Rex breed began. All Devon Rexes can trace their ancestry back to Kirlee.

Sadly Kirlee was killed in a road accident in 1970. 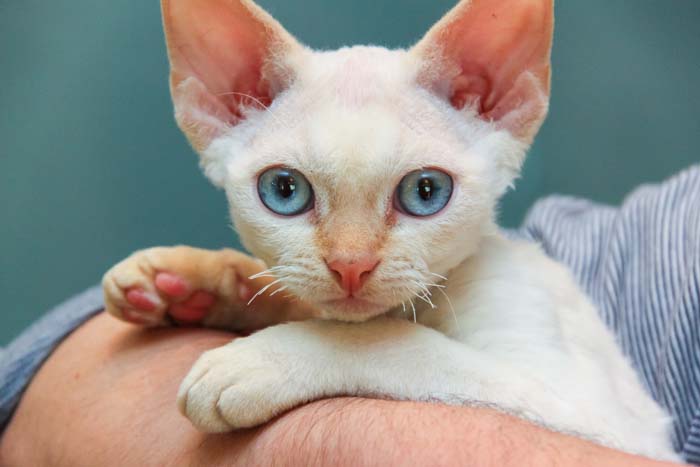 Pixie-like in appearance, the Devon Rex is a small to medium-sized cat with a muscular body and hind legs which are longer than the forelegs.

The head is a modified wedge-shape with large eyes, broad cheekbones, strong chin and a short muzzle. Ears are large and low-set.

The coat is short, soft and curly and contains all three types of hair guard, awn and down. Whiskers and eyebrows are short and crinkled. 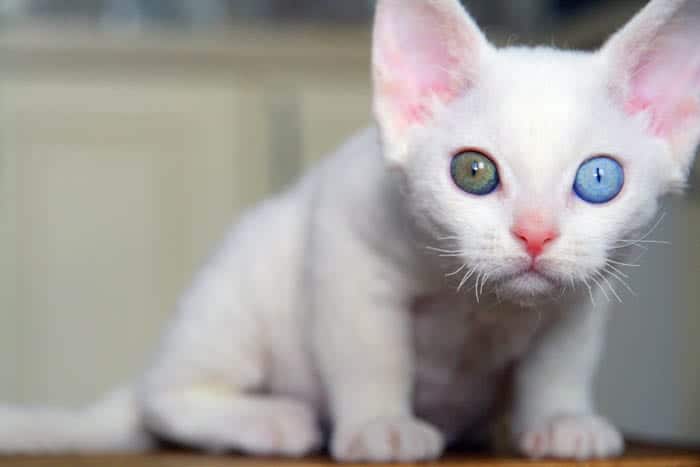 The Devon Rex is an intelligent, mischievous and active breed of cat. While they are a very busy breed, they also thrive on human companionship and love to be close to their owners. They enjoy sitting on your lap, snuggling up with you in bed and even riding on your head or shoulders.


Devons aren’t particularly talkative cats, but they do like to chirp. Although I have never had a Devon Rex personally, I have spent a lot of time with this breed; they are a happy, easygoing, energetic and funny breed of cat. They get along great with everybody.

The Devon Rex is often described as a “monkey in cat’s clothing“. 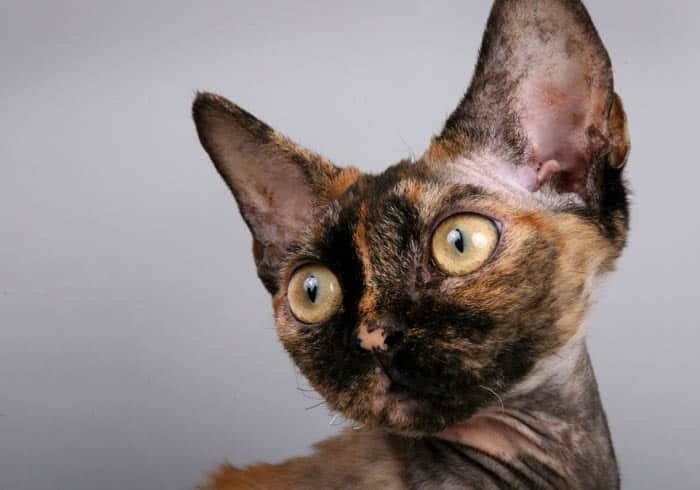 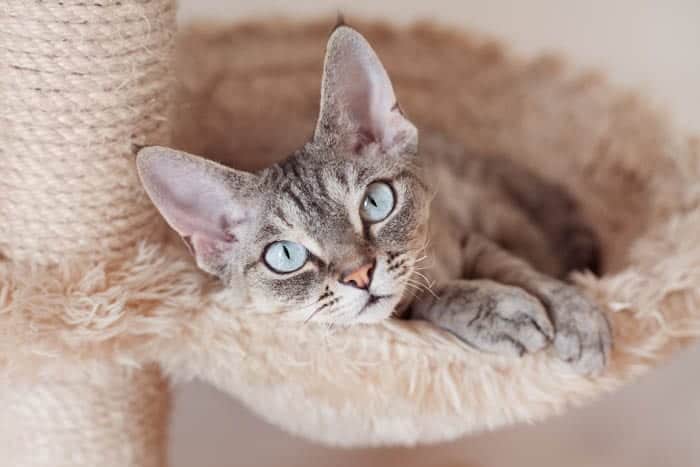 If you are looking to bring a Devon Rex into your home, we recommend choosing a registered cat breeder. They are registered with a local or national cat council and have to abide by strict rules.

If possible, look for a breeder who raises their kittens underfoot, that is, inside the house, so they are used to lots of human interaction and the hustle and bustle that goes with most households.

Most breeders won’t let kittens go to their new home until they are at least ten weeks, many Devon Rex breeders hold onto the kittens longer as they are quite a petite breed and many veterinarians won’t desex a kitten until it is at least 2 kg.

Most breeders desex kittens before they go to their new home, which is because responsible breeders will only sell entire kittens to other registered breeders. If you do want a kitten to breed with, you should state this when you make contact with the breeder. 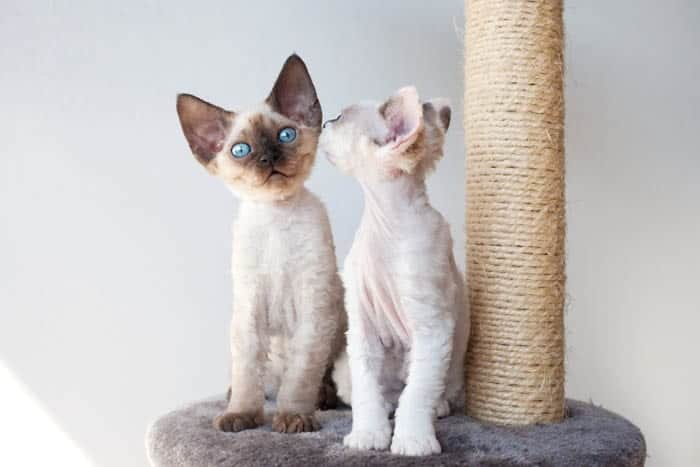 Devon Rexes can produce more ear wax than other breeds which may require cleaning.

Due to their trusting nature and thin coat, Devon Rexes should be kept indoors, preferably with access to an outdoor enclosure.

Dental care is important for all cats.  This can be achieved with a cat toothbrush and toothpaste and/or by feeding your Devon raw chicken necks or chunks of beef.

Your Devon Rex should receive three core vaccines as a kitten followed by a booster shot at 12 months. Updated vaccination guidelines recommend tri-annual vaccinations for low-risk cats, but speak to your veterinarian as they may recommend a different vaccination schedule. 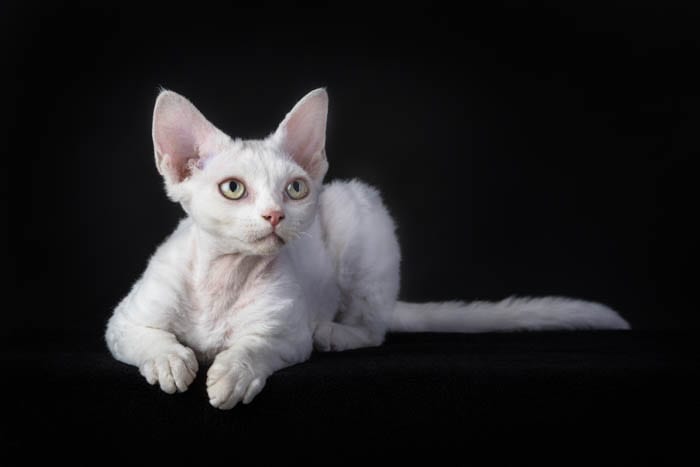 Devon Rexes are suitable for 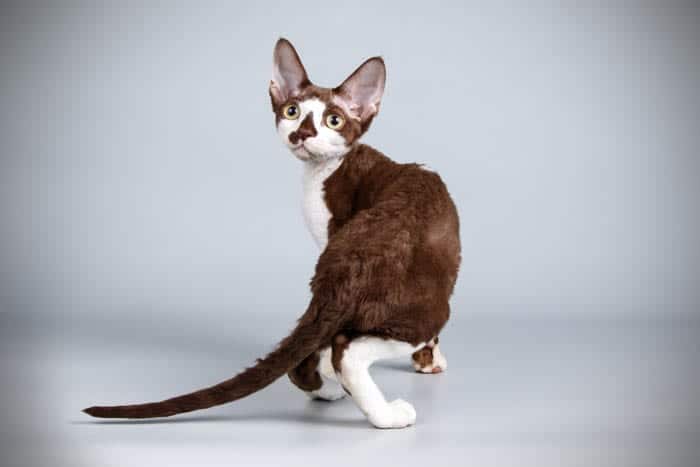 Active households. Devons thrive on company and can become destructive if left for long periods on their own. They get along with other family pets, including dogs and are great with children. 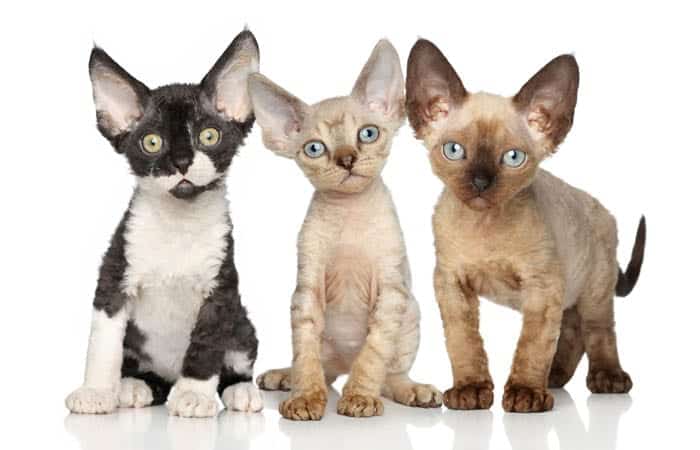 In truth, a rex cat is no different from any other cat and produces allergen like all other cats. They are not hypoallergenic by any means, as claimed by some.

Then why do some people seem to have no allergic reaction to rex cats? There is no simple answer to this question at this time, and more research is required to get the answers needed. One possible hypothesis is that as rex cats have less hair to shed, they simply deposit less allergen-laced hair around the home. But, whatever the reasons some allergic people seem to tolerate them.

From personal studies and observations by Margaret Lawrence in the UK, she found that around 10% of people allergic to cats tolerate rex cats. Please, before you race out and look for a rex cat, remember you should always test your allergies by visiting home or catteries that only own rex cats, and test continuously over several weeks or months. As you don’t want the poor little kitten to be re-homed if you find out you are allergic to him or her. Don’t let your new cat become another statistic at a shelter.