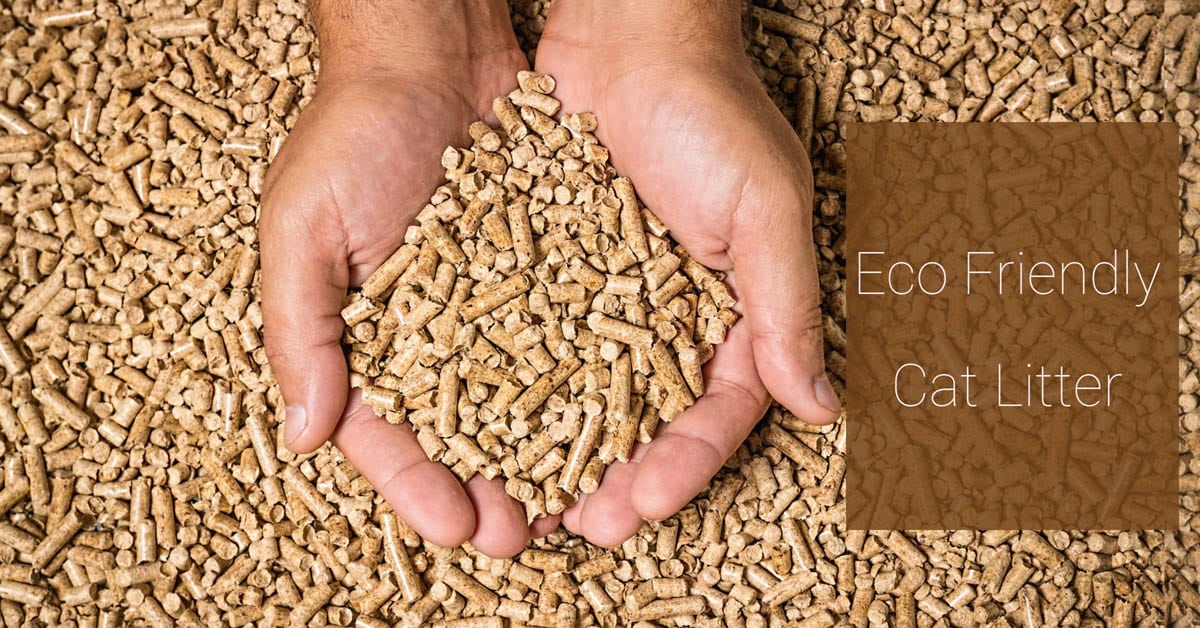 Most of us want to reduce our carbon footprint and are looking at ways to reduce waste and our impact on the environment. This extends to petcare and looking for sustainable products we can use with our cats.

Cat litter was invented by Edward Lowe in 1947, before then, cats either eliminated outside or if they had to stay indoors, sand and ash was used (imagine the mess). Lowe’s neighbour (or acquaintance), Kay Draper asked Ken if he had any good absorbents for cat waste and Lowe gave her Fuller’s earth, which she found worked better than sand and ash. Ken launched “Kitty Litter”, which he initially gave to pet shops and handed out at pet shows before setting up a network of distributors to launch the product nationally.

What to look for in an eco-friendly cat litter

No litter is effective if it doesn’t appeal to the cat and the household, which includes;

Today we have so much more choice than the traditional cat litter, including recycled papers, pine, corn, soy, wood pellets, wheat and walnut shells.

Clay litter is made from Fuller’s earth, which is capable of absorbing its weight in moisture and was the original cat litter. This type of cat litter dominated the market from the late 1940s until the early 1990s.

Clumping cat litter is made from bentonite clay that clumps together when it absorbs liquid and came on the market in the early 1990s. When the cat urinates, the wet litter forms a clump which makes litter box maintenance easier.

Bentonite is obtained by strip-mining (or surface mining) which strips land of plants and wildlife then utilises heavy equipment to remove the top layer of earth to access the seam underneath.

2.2 billion kilos (5 billion pounds) of clay cat litter is mined each year in the United States, most of which will end up in landfill. My own cats get through 7 kg of clumping clay litter per week, which is a staggering 364 kg every year.

Silica crystals are made from sand which is heated with coke in a furnace and was the next novel cat litter to come on the market. Silica holds odours well and tracks less than clay litters.

More and more types of biodegradable cat litters have become available which are made from plant materials. Recycled newspapers are the most popular, and are produced from newspapers that are re-pulped and de-inked, which leave behind long and short fibres. The short fibres are de-watered, turned into pellets, dried and mixed with an agent to control odour for cat litter.

Other types of biodegradable cat litter include wood-based pellets and the newer plant-based litters.

Biodegradable cat litters are made from by-products of the farming and food production industry or produced from sustainable sources.

How to dispose of non-recyclable cat litter


Clay, clumping clay and silica crystals are non-recyclable and non-flushable. They must be bagged up and disposed of in the outside trash.

How to dispose of biodegradable cat litter


These types of litter are biodegradable and can be composted on gardens not used for food. Many brands claim their litter is also flushable, but I personally am not a fan as large quantities of cat litter can clog pipes and flushing cat feces can contaminate waterways with toxoplasma gondii. T. gondii is a protozoan intracellular parasite that infects all warm-blooded animals. Cats are the definitive host to T. gondii which means the parasite must spend its final developmental stage, and reach its mature form in the cat. Oocysts are shed in the feces and are resistant to chemical water treatment.

To compost biodegradable litters, remove solids and urine clumps of and dispose of in the outside garbage, the remaining cat litter can be composted, used as mulch or dug into garden beds. I have found the last method improves the texture and quality of the soil.

Do not use cat litter on beds where edible food is grown.

Apartment dwellers who don’t have access to a garden can still make a difference. Bag litter in biodegradable paper or plastic bags and dispose of in the outside garbage. The cat litter will still make its way to landfill but will degrade in time compared to clay or silica litters in plastic bags which will potentially still be intact in years to come.

Cats don’t like change if you are planning to switch to a different type of cat litter do so over a few days by adding a small amount of the new litter to the old and less of the former litter. Finding the right litter that you and your cat are happy with can take some experimenting, but as we try to move forward with environmentally friendly products, making a switch to sustainable and biodegradable types of cat litter will make a difference.

As always, proper litter box maintenance is essential for litter tray success. Scoop litter trays twice a day and empty once a week.