A seal point Siamese is a Siamese cat whose coat color is seal point (“Seal point” is the color). This unique coat consists of an ivory or cream background with dark brown/black points on the face (known as a mask), ears, paws and tail.

The seal point color can also be found in a number of other breeds including the Birman, Balinese, Ragdoll, Himalayan (pointed Persian cat), as well as breeds that are permitted to have a range of coat colors and patterns such as the Devon rex, Cornish rex, exotic shorthair and British shorthair.

Burmese cats have a similar gene known as cb (Siamese is cs), which also causes a reduction in the amount of pigment produced on warmer parts of the body. The Burmese and Siamese genes have incomplete dominance with each other, producing a mink cat with the genotype cs/cb, commonly known as the Tonkinese.

Due to the warmth inside the mother’s uterus, all Siamese kittens are born white. Their points gradually develop from three weeks of age but will not reach their full colour for several months.

3. Seal point Siamese are one of the most long-lived cats

Siamese in general have a long lifespan and can live beyond twenty years of age. This exceeds the average cat lifespan of 12-15 years. Scooter, holds the record for the world’s oldest Siamese, who lived to the ripe old age of 30.

4. There are three types of seal point Siamese

The appearance of the Siamese has changed quite a lot over recent decades. Modern Siamese cats are much more slender with a long and slender wedge-shaped head and large ears. Originally there were two Siamese types, the applehead and the classic. The classic Siamese is somewhere between the applehead and modern but has been around as long as the applehead Siamese has. Over time, the Siamese body and head became more slender (wedge-shaped). Most Siamese at cat shows are of the modern type.

5. There is a dilute version of the Seal Point Siamese (“Blue Point”)

The blue point Siamese is the dilute form of seal point, and as the name suggests, the points are a grey/blue colour.

Dilution occurs due to a mutation in the melanophilin (MLPH) gene which provides instructions for making melanophilin, a carrier protein that is found in the pigment-producing melanocytes. This protein is essential for the transport, even distribution and translocation of pigment granules known as melanin. Menalocytes are specialised cells that contain organelles known as melanosomes. Melanosomes synthesise, store and transport melanin out of the cell via the dendrites to neighbouring keratinocytes (keratin producing cells).

In the dilute cat, melanin synthesis is normal, but the pigment granules are enlarged and deposited into the hair shaft unevenly, some areas will contain clumps of pigment granules while other parts of the hair contain none.

Seal point is the most well-known of the Siamese colors but is not the only color. The traditional four Siamese colors are seal, chocolate, blue and lilac, as shown on the 4 images below: 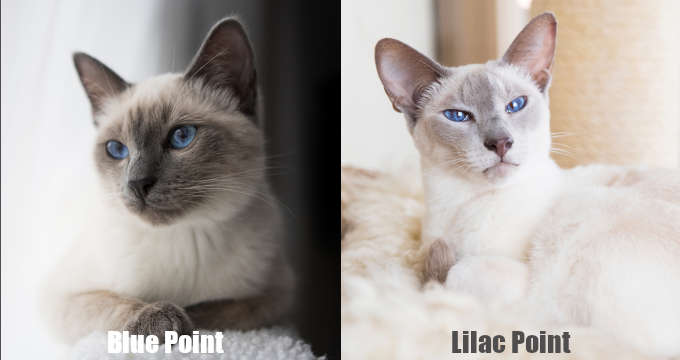 Difference between blue point and lilac point: both are gray but blue point shows a darker gray.

Breeders have introduced a number of additional colors including flame point, cinnamon and lynx Siamese cats. Some registrars accept these newer colors as Siamese, while others (notably the Cat Fanciers Association) have split them into a separate breed known as colorpoint shorthair.

7. Seal point is a form of albinism

The gene responsible for the seal point colouration is known as the Himalayan gene and is a form of albinism. The medical term is Type I oculocutaneous albinism (OCA 1b TS).

Genetically, the seal point Siamese is black, however, there is a missense mutation (a change in a single base pair that causes the substitution of a different amino acid in the resulting protein) in the TYR tyrosinase gene (cs = c.940G >) which produces tyrosinase, an enzyme for controlling the production of melanin in the hair, skin and eyes. Tyrosinase normally works at body temperature, but in the pointed cat, tyrosinase can only function below certain temperatures, leaving the warmer parts of the body with hair that lacks melanin and the cooler parts pigmented. Interestingly, the seal point Siamese often becomes darker during winter as temperatures drop.

Have you noticed that Siamese cats sometimes have crossed eyes?

Not only does the Himalayan (pointed) gene affect the coat, it also involves the eyes.  The name Type I oculocutaneous albinism (OCA1b TS) gives it away, and affected cats have convergent strabismus, a condition in which the eyes do not line up with one another. Strabismus is cosmetic only and has no impact on the cat’s vision.

The Himalayan gene (cs) is recessive, which means the cat must inherit two copies of the gene (one from each parent) to be a seal point. As seal point Siamese cats don’t carry the genes for solid or tabby, they can only produce pointed offspring.

Non-pointed cats (tabbies, solids, or bi-colors) can potentially produce pointed kittens if they and the cat they mate with both carry the Himalayan gene. This is why a pointed kitten may randomly turn up in a litter of kittens from non-pointed cats.

When allocating codes for genes, dominant genes are always in UPPERCASE and recessive genes in lowercase.

The first reference to the seal point Siamese came from the Tamra Maew (Cat Treatises). Martin R. Clutterbuck describes eight known books containing cat poems that date back to the Ayutthaya period (1350 to 1767). Seventeen varieties of cat (termed ‘set of 17’) are described as bringing good luck [1]. The texts describe the following cats:

11. Arrival in the United Kingdom

Pho and Mia were the first Siamese cats to arrive in England in 1884. It is said that King Chulalongkorn gave them Mr Edward Blencowe Gould an Acting Vice-Consul at Bangkok who gave them to his sister, Mrs Lilian Veley (nee Gould). Pho and Mia are recorded as 1a and 2a in the Siamese Cat Register and were exhibited at Crystal Palace the following year.

Mrs Veley went on to co-found the Siamese Cat Club in 1901.

Si and Am are the names of the two sinister seal point Siamese from the 1955 movie The Lady and the Tramp.

Bucky Katt is a lazy seal point Siamese who features in the cartoon strip Get Fuzzy.

Jason (3 May 1964 – January 1976) was a seal point Siamese who regularly featured on the children’s television show, Blue Peter. Below is a picture of Jason with his kittens.

Marcus was a seal point Siamese given to actor James Dean in 1955 by Elizabeth Taylor near the end of production of the movie Giant. It is said that when James went to Salinas, California for a car race, he left Marcus in the care of his friend Jeanette Doty with handwritten instructions. Sadly it was during this trip that he was killed when his Porsche 550 Spyder hit a Ford Tudor that had pulled in front of him.

Banjo was owned by actor Anthony Perkins, who is best known for his role as Norman Bates in Alfred Hitchcock’s Psycho.

Andy Warhol was a well-known Siamese cat lover who surrounded himself with a number of Siamese cats.

Siam was the first Siamese cat to arrive in the United States in 1898 as a gift from the American consul in Bangkok, David B. Sickels to President Rutherford B. Hayes and First Lady, Lucy. Sadly, Siam died a few months after her arrival.

Shan was a seal point who came to live at the White House with Gerald Ford’s daughter, Susan.

The Siamese has unfairly earned a reputation for being aggressive, mean-spirited and jealous. Part of this is due to their portrayal in The Lady and the Tramp. While not generally mean or aggressive, Siamese cats do tend to bond with one human member of the household and can be jealous at times.

Siamese cats were considered sacred in their native Thailand and were believed to be sacred and used to guard Buddhist temples when a person of note died. In The Book of the Siamese Cat, author Rose Tenet writes:

So deeply did the Royal household feel about their pets that they believed them to be sacred and thought that they enshrined the spirits of the dead. When any of the Royal princes was buried, a favourite cat would be entombed alive with him, the idea being that it if managed to escape through one of the small holes in the roof of the burying-place, then the priests would know that the dead man’s soul had passed into the cat’s body. [2]

14. How much does a seal point Siamese cat cost?

The cost of a seal point Siamese varies from breeder to breeder as well as the quality of the cat. A show cat is an exceptional example of the breed and may cost more than a pet quality cat. There is nothing wrong with the pet-quality cat, but he or she may have a minor fault such as a kinked tail. Expect to pay between $1,000 – $1,500 for a seal point Siamese. This usually includes the cost of two out of three required kitten vaccinations, microchipping, parasite control and desexing (spay or neuter).