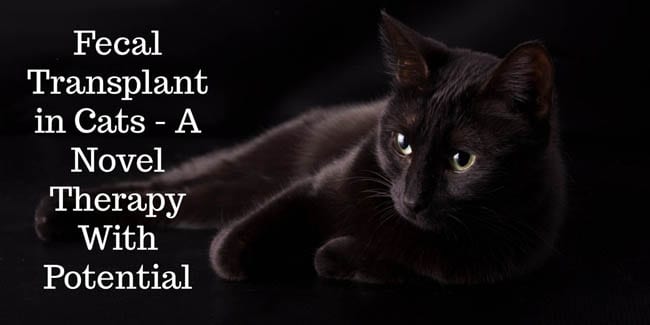 What is a fecal transplant?

Also called a fecal microbiota transplant or FMT, a fecal transplant is a therapy which shows promise for treating several conditions including chronic diarrhea and inflammatory bowel in humans and animals. The treatment uses the stool from a healthy donor, and transplants it into the patient, to restore microflora in the intestinal tract.

Fecal transplants may be an emerging therapy in modern medicine. It is first described by Chinese medical doctor Ge Hong in the fourth century. In the 1600’s Chinese doctor, acupuncturist used yellow soup and golden juice to treat several gastrointestinal diseases.

The digestive tract contains a complex community of symbiotic and commensal bacteria (microbiota). Each individual (human or animal) has its unique microbiota which consists of trillions of bacteria. These organisms play an important role in maintaining the overall health of the host, including:

Healthy microbiota becomes out of balance for some cats (dysbiosis or leaky gut), often due to the over-use of antibiotics. Unfortunately, antibiotics are not selective and can kill helpful gut bacteria as well as pathogenic (disease-causing) bacteria. When this occurs, pathogenic bacteria can take hold in the gut, which leads to dysfunction, most often inflammation and/or diarrhea.

Why do cats need FMT?

While there is still little research on fecal microbiota transplants in cats (read here on the first FMT in cats), it has shown promise in both humans and dogs. FMT is used to treat Clostridium difficile colitis in people which is caused by an overgrowth of bacteria of the same name. This bacteria (shortened to C. difficile or C. diff.) release toxins which cause inflammation of the intestines leading to chronic diarrhea, abdominal cramps and fever. The success rate of fecal microbiota transplants in humans with C. diff is between 85-90% for the first treatment and up to 100% after a second treatment.

Veterinarians will try several methods to treat chronic diarrhea in cats. It is classified according to how it responds to a particular treatment, such as:

Inflammatory bowel disease (IBD) is a frustrating group of disorders caused by the infiltration of inflammatory cells into the mucosa of the gastrointestinal tract and is a leading cause of vomiting and diarrhea in cats.

We still do not fully understand the cause of IBD. Likely causes include bacterial infection, dietary allergy or intolerance, genetic influence and parasites, which cause cats to produce antibodies that attack their digestive tract.

There is a new focus on the role of gut microbiome that are a group of micro-organisms that live in the gut and has many roles such as inhibiting pathogens, metabolic function, assisting the immune system and regulating the production of antibodies.

As with chronic diarrhea, not all cats will respond to treatment. This is where fecal transplants may offer hope to restore a healthy microbiome.

Donors must be healthy, have no history of gastrointestinal disease, have not had antibiotics for a set period (which can vary), and is free of disease and parasites.

The donor cat provides a stool sample, which is mixed with sterile saline and strained to produce a particle-free slurry.

The recipient fasts overnight, the following morning sedation and anesthetic are administered followed by an enema to clean the GI tract, and the fecal transplant is introduced into the gastrointestinal tract of the recipient via enema, colonoscopy, endoscopy or sigmoidoscopy. The slurry is held in the colon for 45 minutes before anesthesia is reversed and the cat regains consciousness.

I hope in future there will be more research in cats for this promising if not unique therapy.