Head and facial swelling in cats have several possible causes from mild and self-limiting to life-threatening.

Any type of head or facial swelling must be evaluated by a veterinarian, while some causes are mild and self-limiting, there are several serious pathologies associated with swelling on the head or face.

Onset may be acute (sudden onset) or chronic (slow and progressive) and may originate from the underlying tissues or develop on the surface of the skin.

A dental abscess is a pus-filled pocket beneath the tooth causing swelling, it may be open or closed. Common causes of dental abscess include trauma, broken tooth, and FORL lesions.

Pain and fever will accompany an abscess and your cat may display a reluctance to eat if he has a painful mouth. If the abscess hasn’t opened up, you will notice a firm, round and warm lump either inside the mouth or outside. Once open, a foul-smelling liquid will ooze out of the wound.

Lance and clean the abscess and remove the affected tooth. Oral antibiotics as a follow-up.

Much like a dental abscess, a facial abscess is a pus-filled pocket on the skin. Most abscesses occur as a result of a bite from another cat that injects bacteria under the skin. As the body fights this, it walls off the affected area to prevent the infection from spreading.

Lancing the wound, cleaning it out and a course of antibiotics to kill the bacteria.

Several cancers can affect the face causing lumps and swelling. Tumours can affect any part of the face including the eye, mouth, skin, connective tissue, lymph nodes, and bone.

Symptoms will vary depending on the location and type of cancer but may include swelling (often unilateral), loss of appetite, hair loss, open wounds, ulceration, bleeding from the affected area.

Depends on the type and location of cancer but may include surgery to remove the tumour and/or chemotherapy and radiation therapy to shrink the tumour.

Anaphylaxis is a severe and life-threatening allergic reaction that occurs when the body mounts an over the top reaction to a perceived threat (allergen), the body will have had exposure to the allergen before, which would have stimulated an immune response, future exposures can result in more severe responses.

Any substance can cause anaphylaxis in cats including vaccines, blood transfusion, food, drugs and insect bites or stings.

Administration of epinephrine (adrenaline), which counteracts the adverse effects by relaxing the airways to make breathing easier, increases blood pressure by causing constriction (tightening) of the blood vessels (which dilate during anaphylaxis) as well as preventing the further release of cytotoxic granules. 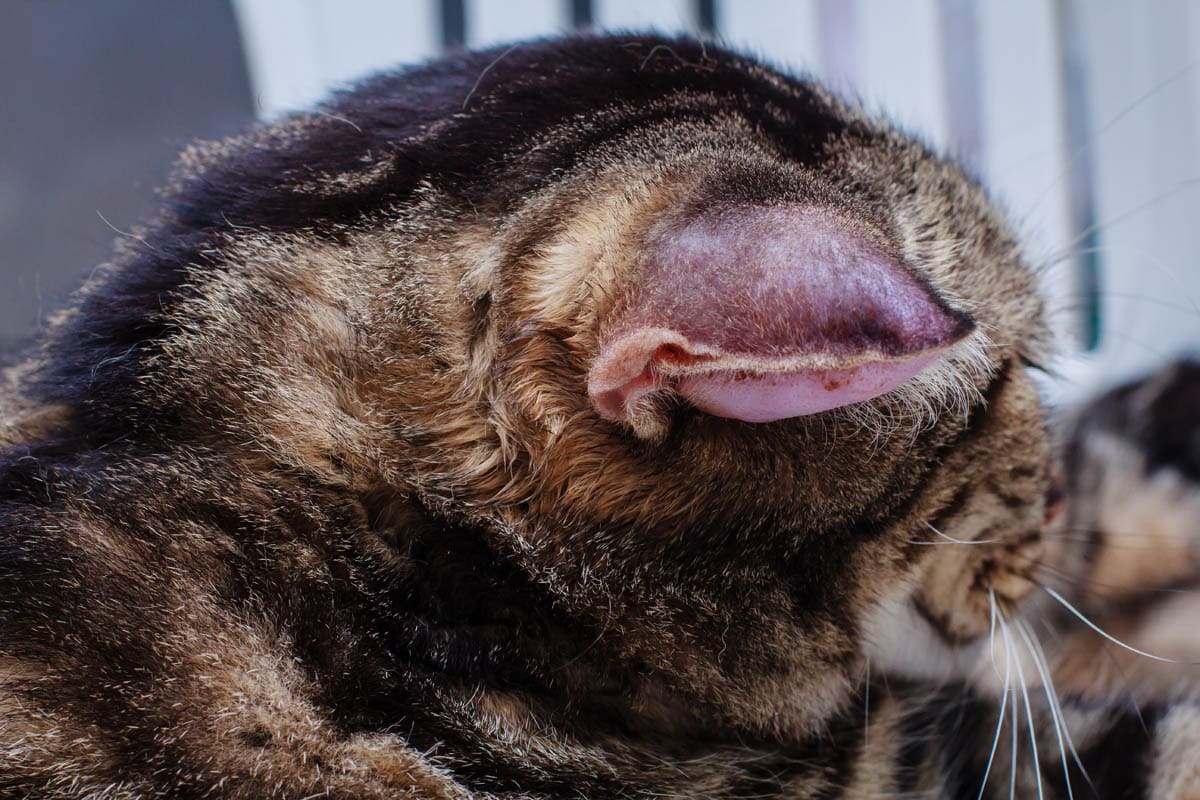 An ear hematoma is a localised collection of clotted blood within the ear, usually the result of trauma to the affected area. Symptoms include a small or large “bubble” in the ear, which will feel warm to the touch and be painful.

This depends on the size of the hematoma. Small hematomas can be drained with a needle. Larger ones will require surgery to correct, opening up the affected area to allow the fluid to drain out.

Antivenom to neutralise the venom as well as aggressive supportive care.

A rodent (or indolent) ulcer is an inflammatory lesion that usually affects the upper lip area. It is believed that rodent ulcers are the result of an allergic reaction to insect bites or food. Symptoms are a raised, thickened red/brown ulcer which is well defined.

Control parasites with suitable medication, steroids to reduce inflammation and eliminate the cause (where known).

Cryptococcosis is a common infectious disease caused by the yeast-like fungus Cryptococcus neoformans which is found in the environment worldwide. Infection occurs when cats inhale the spores, which may remain localised in the nasal cavity or disseminate throughout the body. Immunised cats are at increased risk of disseminated cryptococcosis.

Symptoms include hard, nodular swellings, particularly across the nose, sneezing, nasal discharge, skin lesions on the head and lethargy.

Antibiotic therapy and in some cases surgery will be necessary to remove lesions in the nasal cavity. 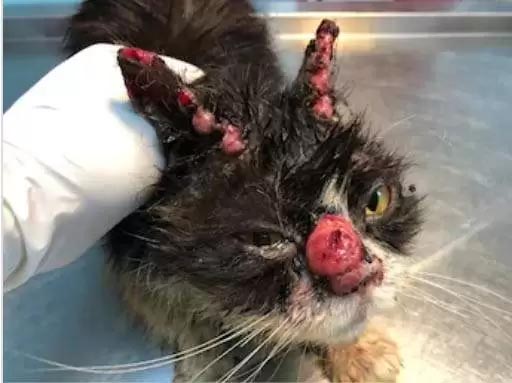 Sporotrichosis is a rare zoonotic (transmissible to humans and other animals) fungal infection of humans and animals, caused by the fungus Sporothrix schenckii. S. Schenckii is present in soil, wood, living and decaying plant material. Infection occurs in a range of hosts which include humans which is known as rose gardener’s disease. Outdoor workers such as farmers, forestry workers, gardeners, and nursery employees are at the highest risk. Dogs, camels, dolphins, horses, cattle, and pigs have also been infected. However, infection occurs most often in cats.

Affected cats develop non-healing noduloulcerative lesions with a thick brownish, red exudate. The head and face are most commonly affected, particularly the bridge of the nose. The fungus may disseminate throughout the body and can affect any organ system, the lungs and liver are the most common sites, other locations include the bones (osteoarticular sporotrichosis), brain, joints, eyes, spleen, mammary gland, testis, and eye.

Itraconazole is the treatment of choice and can take several weeks or months for lesions to resolve.  Other treatment options include ketoconazole, sodium iodide, potassium iodide and terbinafine (Lamisil). However, these medications are potentially toxic to the liver. During treatment, it will be necessary to closely monitor liver function for signs of toxicity.

Feline acne is a common skin condition, which occurs when comedones (blackheads) develop on the chin. Some cats stay in this stage, while other cats develop inflamed and irritated hair follicles which become swollen and infected. Pustules and hyperplasia (enlargement) of the hair follicles develop over time.

The cause is not fully known, but plastic food bowls, allergies and stress have all been suggested as possible triggers.

Mild feline acne can be treated at home with witch hazel applied to the chin twice a day and switch to ceramic or stainless steel food and water bowls.

Severe acne will need to be treated by a veterinarian who can prescribe topical antibiotics to treat bacterial infections, steroids to reduce inflammation and oral synthetic retinoids for cats who are not responding to treatment. In some cases, the veterinarian will express comedones and cysts.

Do not give paracetamol to cats as they lack the necessary enzyme to metabolise it. Symptoms of acetaminophen toxicity include vomiting, salivation, difficulty breathing, brown colouration of the gums ( due to methemoglobinemia) and of swelling to the face and paws. Liver damage and damage from methemoglobinemias are the main toxic effects of ingestion of paracetamol.

Immediate treatment is vital for a cat who has ingested paracetamol. The earlier the treatment the better the outcome.

Induce vomiting as well as administration of N-acetylcysteine to neutralise the drug. Once symptoms develop, the prognosis is poor.

Conjunctivitis is a swelling of the conjunctiva, the pink membrane which covers the front of the eyeball. There are several causes including infection, allergies, foreign object, and injury. Symptoms include swelling, a raw/meaty appearance around the eye, blinking, squinting, eye discharge, watering, pawing the eye.

Find and address the underlying cause including, antibiotics, antiviral medications and removal of the foreign object.