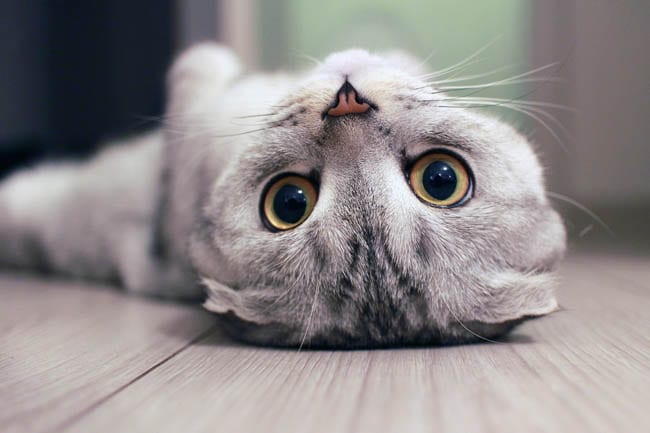 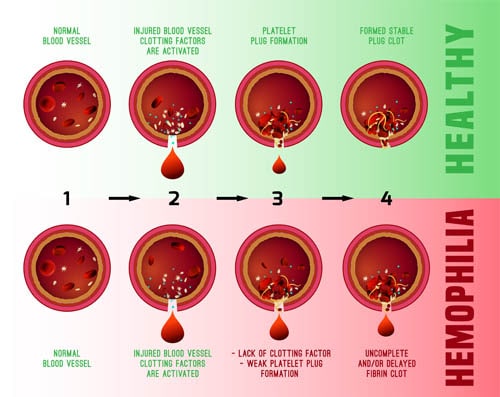 When a wound occurs, coagulation (or clotting) occurs to turn the liquid blood into a gel to form a clot and stop blood loss, this is called hemostasis, and there are three steps in this process.

When a blood vessel becomes damaged, vasoconstriction occurs, making the blood vessel smaller, which restricts the loss of blood from the damaged site.

When damage to a blood vessel occurs, circulating platelets form a clump over the damaged vessel to block it off.

Fibrinogen is activated by clotting proteins known as coagulation factors in the blood-forming fibrin strands. These strands help to mesh the platelet plug, strengthening it.

Hemophilia is usually inherited as an X linked recessive trait. Males are most affected as the faulty gene is on the X chromosome, as males only have one X chromosome, he develops the condition.

Female cats have two X chromosomes (one from each parent), which means they can carry the faulty chromosome, but won’t develop hemophilia themselves as their ‘normal’ X chromosome is enough to prevent hemophilia.

While males are most often affected, it is possible for a female to have hemophilia if a male with hemophilia mates with a female carrier, and the two X female chromosomes both have the faulty gene.

Hemophilia can also develop as a result of vitamin K deficiency. This vitamin plays a vital role in the synthesis of coagulation factors in the liver; this is most often due to ingestion of rat poison.

Liver disease as the liver is responsible for the synthesis of coagulation factors.


A breed predisposition has been linked to Devon Rex, British Shorthair, Siamese and Maine Coon cats and has been seen in domestic cats.


Symptoms of hemophilia usually present before the cat reaches adulthood. Bleeding may occur due to a trauma such as a scratch or a wound. The severity of bleeding depends on the amount of clotting factor missing from the cat’s blood. Kittens with a severe deficiency in affected factors often die at birth.

Other symptoms due to anemia or internal bleeding may also be present and include:

Your veterinarian will perform a complete physical examination of your cat and obtain a medical history from you.

There is no cure for cats with inherited hemophilia and treatment will depend on the severity of the disease.

For cats who have acquired hemophilia due to rodenticide poisoning:

The prognosis is good for cats with mild to moderate hemophilia, however, it is poor in cats with severe hemophilia.