Himalayan cat at a glance

The Himalayan is a long-haired Persian, with coloured points and blue eyes. They are known for their easygoing nature and quiet disposition. A moderate to large breed of cat, with a beautiful long coat that has darker points on the extremities.

A Himalayan (or Himmie) is essentially a Persian cat with colourpoint markings. The CFA considers the Himalayan to be a Persian, while other cat bodies recognise them as a separate distinct breed.

The Himalayan cat was the creation of a scientist and a cat breeder. In the 1930s, Dr. Clyde Keeler of Harvard Medical School and Virginia Cobb of the Massachusetts-based Newton Cattery teamed up to blend a Persian cat and a Siamese cat. After six years, the first true Himalayan kitten was born named Debutante. Miss Cobb published an article for The Journal of Hereditary in 1936, outlining the progress of this programme.

In the 1950s, development of the Himalayan was taken up by Marguerita Goforth of Goforth Cattery in San Diego. At the same time, Brian Stirling-Webb of Briarry Cattery in Richmond in Surrey and Mrs Harding of Mingchiu prefix had also started work to on breeding programmes with the goal of creating a colour pointed Persian. Mingchiu cattery is credited with developing the finest-typed show specimens along with two new colour varieties, the lilac and chocolate Himalayan. The cats produced by Stirling-Webb and Harding were named Colourpoint Longhairs.

The Himalayan takes its name from the Himalayan rabbit who has the same pointed coat pattern.

The Himalayan is a sweet and good-natured breed of cat and share the same placid nature as their Persian cousins. That is not to say they don’t like to play, but the Himalayan is generally less active than other breeds of cat.

Himalayans love their human family and can be quite talkative, but not as much as their Siamese counterparts. They can be reserved around strangers until they’ve got to know them.

Due to their gentle and laid back nature, Himalayan cats get along well with children, as long as they are gentle. 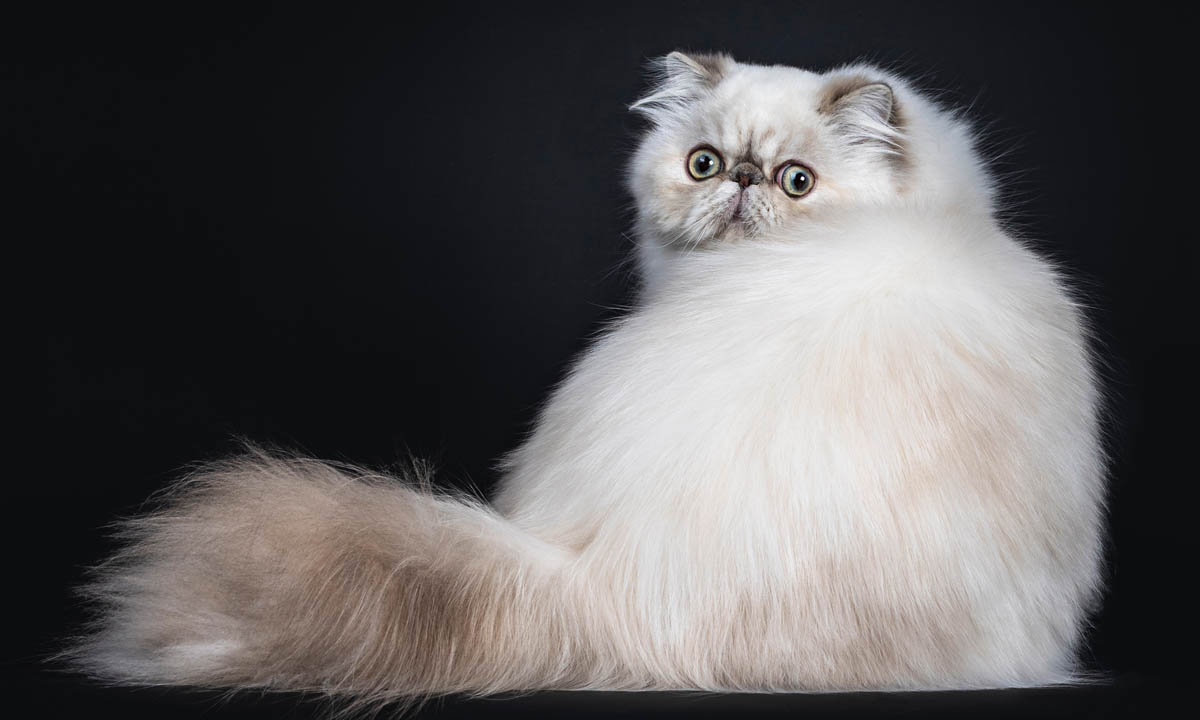 The head is round and massive, with a great breadth of the skill. Skull is smooth and round to the touch. Ears are small and round-tipped.

The Himalayan has a short, thick neck.

The nose is short and wide with a nose break, between the eyes. Nostrils are well open, which allows the free passage of air.

The Himmy has large round eyes which are set wide apart, giving the face a sweet expression.

The body is large, strong and cobby with good muscle tone. The chest, shoulders and rump are broad.

The Himalayan is a brachycephalic breed, which means they have a short, flat face which can lead to health problems such as excessive tearing of the eyes, dental issues, eye ulcers and breathing difficulties. There is a higher incidence of the following diseases in Persian, Himalayan and related cat breeds.

Purebred cats should be purchased from a registered cat breeder and not a pet shop. A registered breeder will be affiliated with a cat council and will have a prefix (the cattery name) and a registration number.

Where possible, it is always best to visit the cattery and meet the kittens as well as the mother (and father if possible). Does the cattery seem clean, well-managed and not over-crowded? I always recommend kittens who have been raised under-foot and not a cage, which means they grow up in the home around the normal hustle and bustle of a home.

Look for a kitten who appears confident and in good health. The eyes, ears and nose should be clear and free of discharge.

Questions for the breeder:

Don’t be rushed into a decision or payment and always keep a record of conversations.

How long does a Himalayan cat live for?

The Himalayan lifespan is between 10-15 years.

Can Himalayan cats be left alone?

Himalayan cats can be left alone for short periods, but do not like to be alone for an extended amount of time. If you are out of the house a lot, consider a second cat for company.

Do Himalayans meow a lot?

No, the Himalayan is a quiet breed of cat.

How often should you bathe a Himalayan cat?

Most cats, including the Himalayan, do not need to be bathed unless their coat has been contaminated. All longhaired cats should be brushed once a day to prevent mats forming.

Is there a Himalayan shorthair?

There is no ‘Himalayan’ shorthair, however the Exotic is essentially a shorthaired Persian which is found in all colours and patterns including pointed.