All domesticated cats (Felis catus) are descendants of the wildcat (Felis sylvestris lybica) which is native to the Middle East.  A symbiotic relationship developed between wild cats and farmers in the Fertile Cresent of the Near East in the Neolithic period between 9,000 and 10,000 years ago.

Humans gave up their nomadic lifestyle and settled on the land. Along with the grains which the farmers grew came rodents. A relationship formed between cat and man, cats protected grain stores by keeping rodent populations down while gaining protection from larger predators such as wolves.

In 2000 a group of researches collected DNA samples from over 900 wildcats throughout the world. What they discovered was there are five genetic lineages of wildcats.

Unlike dogs, there was no need for man to rely on different types of cat,  such as fast dogs for hunting, large dogs for protection, dogs which could retrieve game from the water, dogs which herd livestock etc. As a result, cats have remained relatively unchanged in size compared to their wild ancestors. Cat breeds have been selected for their appearance, not performance.

Domestic cats spread across the globe along well-established trade routes of merchants. As cats migrated, they adapted to their unique climate, for example, the Siberian and Norwegian Forest cats who have a long, thick coat to protect them from bitterly cold winters. According to the UC Davies Veterinary Medicine, there are eight distinct domestic cat racial groups.

It appears that cats arrived in Asia around 2,000 years ago where they remained isolated, this is shown by their genetic differences compared to European and African cats, known as genetic drift. It also appears that cats within Asia were segregated showing more genetic diversity than the European populations of cats. Breeds which have come out of Asia include the Siamese, Korat, Birman and Burmese cats.

So from the common ancestor, different variations of domestic cat occurred.

The very first cat show was held at St. Giles Fair in Winchester, the UK in 1598 although there is very little information about this cat show. There was no award for best ‘breed’, instead there were awards for best ratter and best mouser.

The first breeds to be exhibited were the Maine Coon, who was on display in the 1860s at the local Skowhegan Fair held by New England Farmers.

The first modern-day cat show in the UK was held at Crystal Palace, London in July 1871. Harrison Weir considered the father of cat shows wrote out the breed standards. In his book Our Cats And All About Them, Weir describes several cats including:

Long-haired cats of which there were several varieties including:

He stated forty or fifty years ago; they used to all be called French cats as they were mostly imported from Paris and also notes that the white longhaired and shorthaired cat is always deaf if it has blue eyes.

He then goes on to describe the following short-haired cats:

One journalist was so put off by the appearance of the Siamese cat they described it as ‘an unnatural, nightmare kind of cat‘.

A second cat show was held at Crystal Palace in December 1871, and on 27th January 1872 Harpers Weekly published the following article detailing the show. This show featured Persians, hybrid wild cats, tabby cats, mouse-coloured English (according to harrisonweir.com this is a British Shorthair), Turkish and Abyssinian cats. 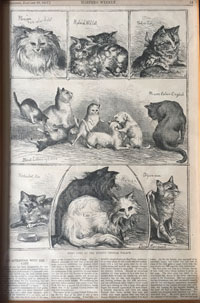 Meanwhile back in the United States, the first official cat show was held in Boston in 1878. Twelve Maine Coons entered. Another show in Boston held in 1883 lists the following cats in their catalogue.

Then in 1895, the first national show was held at Madison Square Gardens, with a total of 176 cats entered.  There were three categories, longhair, foreign shorthair (Siamese, Manx, and Russians) and domestic shorthair. A Maine Coon by the name of Cosey won the show and a silver collar.

From these humble beginnings, the cat fancy was born, and from there, cats went from ‘mousers’ to pampered household pets and an interest in developing breeds which arose from the already naturally occurring breeds, crossbreeding to create new breeds, spontaneous mutations and finally hybrid cats.

From mousers to pampered felines

I can’t give you a definitive answer as to why this came about but can speculate that members of the public, as well as the cat fancy, wanted to preserve the integrity, beauty, and uniqueness of each breed. As has already been noted, cats aren’t a working animal in the same way that dogs and horses are. They are either used to keep rodent populations down, especially on farms, or they are kept as pets. They are attractive, reasonably small, clean, affectionate and easy to care for. A very appealing pet.

All purebred cat breeds should follow a breed standard, which is a set of guidelines for the appearance of a particular breed.  In most cases there should be no outcrossing, to keep the breed pure, except in certain circumstances such as a limited gene pool, especially in the early days when establishing a breed. Breeders must keep strict records of their matings and litters.

The changing face of some breeds

While domestic (moggy) cats have remained much the same throughout the millenniums; some breeds have changed to meet evolving breed standards. Siamese and Persian cats are the most obvious examples (see images below).  Siamese cats have changed quite drastically as well, and have become much longer and leaner in the body and face. Other natural breeds remain almost identical to how they appeared when they were first exhibited.

Some of the breeds we have today came about naturally, these include the Maine Coon, Siberian, Russian, Persian, Turkish Angora, Turkish Van, Abyssinian, British Shorthair, Burmese, Manx cat, Egyptian Mau. We have already discussed the Asian breeds including Siamese, Korat, Birman, and Burmese.  In some cases, if breed numbers were low, such as British Shorthairs after WWI and WWII, other breeds were used as ‘outcrosses’ to help maintain the breed.

Other breeds were created by mating two or more breeds of purebred to form a new breed of cat. The Australian Mist was the brainchild of Truda Straede who wanted an Australian cat with the characteristics of a Burmese and an Abyssinian.  Burmese, Abyssinians and domestic shorthairs were used to create the breed.

The Chinchilla which came about by the mating of a blue Persian with a stray tomcat of unknown origins. The resulting litter produced a smoke-coloured kitten. 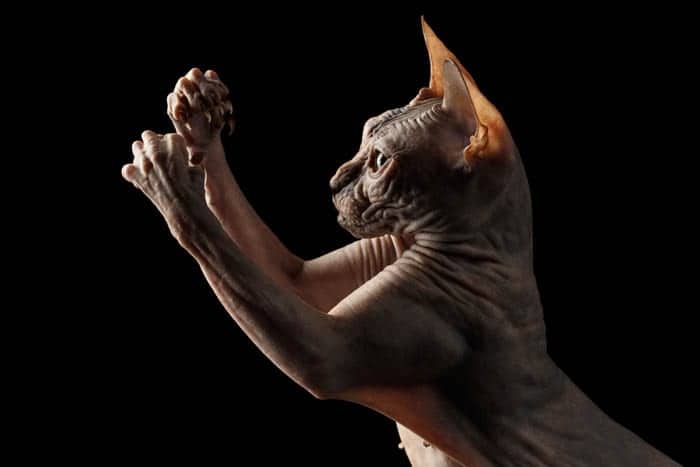 Mutations can crop up randomly, in some cases they may be severe enough not to be compatible with life, or severely affect the quality of life of the affected cats. However, other spontaneous mutations are purely cosmetic and have little to no physical effect on the cat. Usually, when a mutation does occur, and a breed is established, outcrossing is necessary to increase the gene pool.

*There is some controversy over the Scottish Fold which has been shown to suffer due to their mutation which affects the cartilage of the ears as well as the joints and the bones of the rear limbs. This can lead to early-onset, crippling arthritis in these cats.  Some countries have banned the breed. 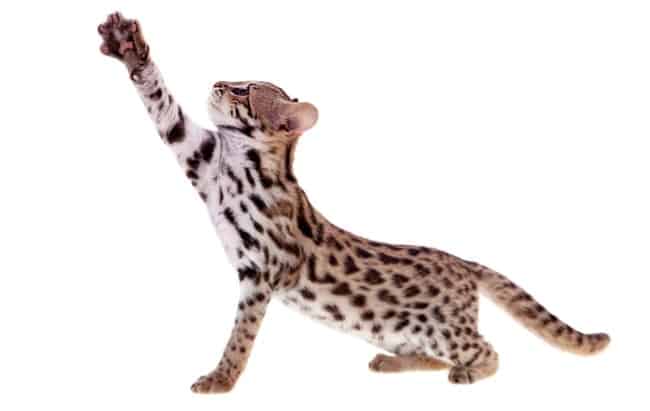 We have already seen that hybrid cats aren’t a modern invention. The Crystal Palace show in 1871 featured wild cat hybrids. 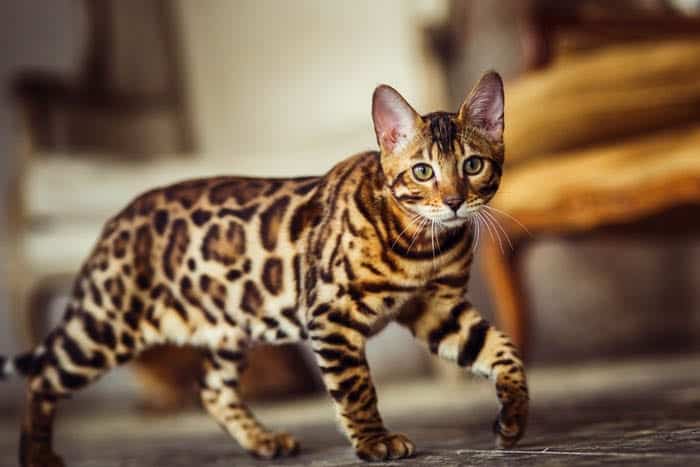 The first modern hybrid developed by Jean Sudgen of Arizona. Jean had purchased a female Asian Leopard cat and believing her to be lonely, put a black domestic cat in with her. Two kittens were born, but only one survived. Sadly Jean aborted this project due to the death of her husband but resurrected it in 1982.

Jean imported a feral cat with distinctive spots from Bombay Zoo. This boy, Millwood Tory of Delhi was mated with hybrid females bred by geneticist Dr Willard Centerwall. Other domestic cats such as Abyssinian, Ocicats, Egyptian Maus, Bombays and British Shorthairs were used in the development of this breed.

The Savannah is a hybrid of a domestic cat and an African Serval. Unlike the Bengal, which has grown in popularity and is now a common sighting on the show bench, the Savannah is still quite rare.

A cross between a Jungle cat and a domestic cat that was developed in the 1990s. There is not a great deal of information on this breed.