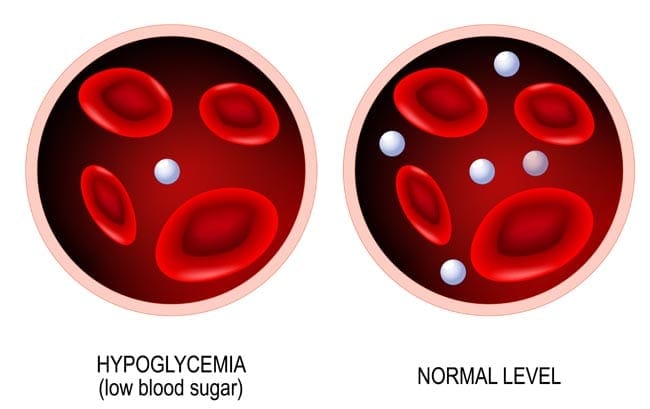 Hypoglycemia is a life-threatening condition in which the blood sugar levels drop dangerously low. The pancreatic beta cells produce the hormone insulin which helps to move glucose from food into the cells (for energy).  It is not a disease in itself, but it is a symptom of an underlying disorder.

The liver and muscles store excess glucose in the form of glycogen when needed, enzymes release it back into the blood. Many cells of the body can use protein or fat as energy sources if blood sugar levels drop, however, the brain relies on glucose alone. If glucose levels drop, the brain can no longer function properly and neurologic dysfunction occurs. Severe cases can lead to brain damage or death.

Most of the symptoms of hypoglycemia (often shortened to hypo) relate to neurologic disorder due to lack of fuel for the brain. Clinical signs and severity can vary depending on how quickly blood glucose declines and how low they drop. Liver disease would bring down blood sugar levels slower than an insulin injection overdose for example.

Many of the symptoms listed can be due to other medical conditions. If you have a diabetic cat, it is extremely important to check his blood glucose levels and urine daily.

Your veterinarian will perform a physical examination of your cat and obtain a medical history from you including any medications your cat is on (including insulin), dosages, diet and accompanying symptoms. If your cat is not a diabetic, it will be important to find out the underlying cause of hypoglycemia. He will need to perform some tests including:

If your cat is still conscious and can swallow, give him a sugar solution such as corn syrup, maple syrup or honey on his tongue. If he is not able to swallow, rub this solution onto the gums or under the tongue. Never force fluids or food into the mouth as this could cause choking or asphyxiation.

If your cat is having seizures or is unconscious, take him to the veterinarian immediately, along the way administer sugar as outlined above.

It is important to follow up with your veterinarian, even if your cat appears to be fine. It may be necessary to re-adjust insulin levels in the diabetic cat.

Non-diabetic cats will require additional tests to determine and treat the cause. Once at the veterinary surgery, your cat’s blood glucose level will be immediately checked and if necessary he will be given intravenous dextrose.

Glucocorticoids such as prednisone to help stabilise blood sugar levels.

Do not administer insulin to a cat after hypoglycemia until a veterinarian has given the okay.

Prevention is always better than cure. Hypoglycemia can escalate very quickly and the aim is to avoid drops in blood sugar.