Internal parasites which can infect cats

Parasites are organisms that live off another organism. Cats are at risk of infection from several internal parasites, which can compete with the cat for food or cause tissue and organ damage.

Worms are the most common parasites to affect cats; other internal parasites include flukes and protozoa. 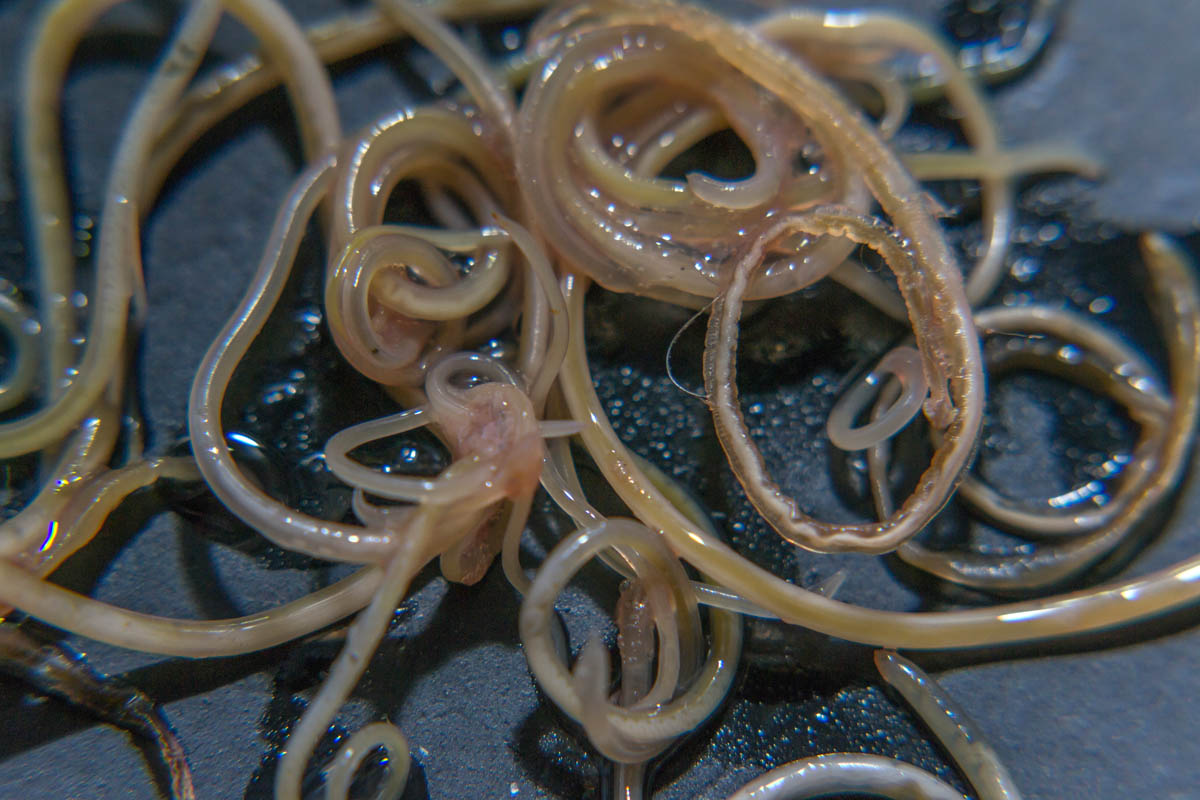 Roundworms are the most common internal parasite in cats. Two species infect cats, Toxocara cati, and Toxascaris leonina. Toxocara cati is more common in cats. They feed upon the intestinal contents, competing with the host for food. Roundworms are around 3 – 5 inches long and spaghetti-like in appearance.

Caused by Dirofilaria immitis, heartworms are a potentially fatal parasitic worm living in the pulmonary arteries, lungs and hearts of cats. Heartworms are nematodes, a type of roundworm; they are several inches long, thin and white.

Heartworms are a common parasite in dogs, although cats do become infected and may develop the disease. While cats are more resistant to heartworm infestations than dogs, cats, in particular, are vulnerable to heartworm, and even a small number can lead to death.

Adult heartworms produce their young (microfilaria) which are present in the bloodstream of the infected animal. Mosquitoes act as an intermediate host to transmit the infection from one host to the next. When the mosquito feeds on the infected host, it ingests microfilaria circulating in the blood. Once inside the mosquito, microfilaria undergoes further maturation, which takes 10 – 14 days, at which time they become infective larvae. When the mosquito feeds from a cat or dog, it injects the larvae into the animal.

Diagnosis of heartworms in cats is often difficult and not always 100% reliable. There are several tests which your veterinarian may perform, including;

Tapeworms are a specialised intestinal parasite known as Cestodes which feed on the intestinal contents of their host.

Tapeworms need two hosts, the intermediate host which passes the cysticercoid around and the final host (your pet), where it develops into an adult tapeworm and lays its eggs. Dipylidium caninum is the most common tapeworm in cats followed by Taenia taeniaeformis. Tapeworms are hermaphroditic, which means they contain both ovaries and testes and are capable of reproducing on their own.

The most common tapeworm found in cats. The cat flea is the intermediate host of dipylidium caninum. Eggs are passed in the faeces and eaten by flea larvae. Once inside the flea larvae, the egg hatches and becomes (cysticercoid). The flea larvae develop into an adult flea, which goes about its business of parasitising your pet and sucking blood. Your cat (or dog) then ingests the flea during grooming. Once inside the stomach, the flea is broken down, and the tapeworm is released. It hooks onto the small intestinal wall and develops into an adult tapeworm. Once it reaches maturity (in around 2 – 3 weeks) egg-filled segments break off and leave the body via the anus. These segments have the appearance of rice grains. These segments are motile (capable of movement).

Dried segments out they have the appearance of sesame seeds. They are then eaten by flea larvae, and so the cycle begins once again.

The second most common tapeworm in to parasitise cats. Infection occurs when a cat eats rodents that contain the larval tapeworm.


The presence of rice-like segments (proglottids) around your cat’s anus and in the environment is a sign your pet has a tapeworm.

The veterinarian may perform a microscopic study of the pet’s faeces to check for the presence of tapeworm segments and or eggs.

Hookworms are a common intestinal parasitic worm found in dogs and cats, although they are less common in cats than they are in dogs.

Hookworms live in the intestine of the host and have teeth-like mouthparts which they use to attach themselves to the intestinal wall and feed off the host’s blood.


When they suck blood from their host, they release an anticoagulant (a substance that prevents the blood from clotting). This results in black or bloody stools.

Fortunately, there are many products on the market to treat most parasitic worms, flukes and protozoa. Your veterinarian is the best person to speak to in regards to which product will suit your cat best.

There are no approved methods to treat heartworm in cats; the available treatments are dangerous. A single dead worm can be fatal in cats as it can break away and cause a blockage of the pulmonary artery (pulmonary embolism.

If there are no clinical symptoms, your vet may decide not to treat the cat and wait for it to clear the parasite in its own time.

Symptomatic cats will need supportive care such as a bronchodilator to open the airways, oxygen therapy, and intravenous fluids.

Adulticide treatment may be recommended for cats with clinical signs which are not responding to supportive care. Caparsolate is the drug used and kills adult worms. This carries risks, as a dead worm can result in a pulmonary embolism. Around 1/3rd of cats receiving treatment will face life-threatening complications as a result of the dying worms. Confinement will be necessary for a few weeks after treatment. Either way, if you choose to let nature take its course and hope that the worm lives out its lifespan within the cat, or if you use an adulticide, there are risks. These must be weighed up by your veterinarian before a decision is made. Surgical removal of the worms has been used in some cases.

Most asymptomatic cats will require no treatment. Cats with clinical signs will require supportive care such as intravenous fluids to treat dehydration and nutritional support while the cat’s immune system clears the parasite.

Can I catch parasites from my cat?

Yes and no. You cannot catch tapeworm directly from your cat, but if your cat has fleas, it is possible to catch tapeworm by accidentally swallowing a flea carrying the tapeworm cysticercoid.

You can, although they can’t develop into the adult form as they do in cats. Infective larvae are found in the soil or sandy areas such as beaches or children’s sandpits. They can penetrate the skin, where they migrate through the body, causing a red, itchy skin eruption (cutaneous larva migrans or ground itch). Hookworm larvae cannot complete their life cycle and die in the epidermis.

Toxocariasis is a disease in humans caused by infection of the roundworm egg. Most cases have been identified as those of T. canis although occasionally T. cati has been identified. In humans, roundworms can’t go past “stage 2” (larval stage). As with infection in rodents, the larvae migrate to various tissues in the body (causing a disease called visceral larva migrans or toxocariasis) including the lungs, brain, eyes, and liver.