The Japanese Bobtail is a natural breed of cat that arrived in Japan over 1,000 years ago. They are thought to have originated in China or Korea, although there have been references made about cats with tail deformities from all over Asia.

Japanese nobility kept these cats and would walk them on a lead. However,  when an infestation of rodents threatened to ruin the silk industry and in 1602 Japanese authorities decreed that all noble cats were to be released to control the rodent population.

In 1968, the Japanese Bobcat was sent to America Judy Crawford who had lived in Japan for the past 15 years and been breeding the Japanese Bobtail there. Elizabeth Freret imported two, Madame Butterfly, a tortoiseshell and white female and Richard, a red and white male.  The pair soon produced kittens.

The Japanese Bobcat is a symbol of good luck and happiness when found in the traditional colour pattern of mi-ke (which means three fur), which is white with red and black patches. This cat has been identified with the famous “Beckoning Cat” (see image below) 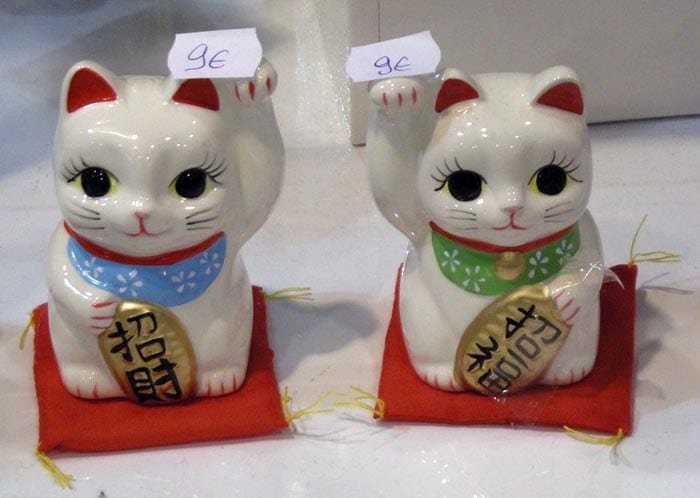 Body: The Japanese Bobtail is a shorthaired cat of moderate size. The body is lean and muscular with slender legs; hind legs are a little longer than the front legs.

Head: The head is wedge-shaped with a long face, high cheekbones, and large, oval eyes in all eye colours, the ears are large and upright.

Coat: The soft and silky coat lies flat against the body and comes in all coat colours but most sought after is the mi-ke.

Tail: The tail of the Japanese Bobtail is short; the length is between 5-10 cm long. It comes in many shapes and sizes; most are curled,  the fur on the tail is longer than the rest of the body.

The Japanese Bobtail is an intelligent and lively breed of cat who remains this way well into adulthood. Because of this, they are easy to train. Words used to describe Japanese Bobtails include curious, active, talkative and playful.