This kind of play is perfectly natural in the kitten. They will stalk, wrestle, roll, bite, scratch, kick their littermates and mother. It is a precursor for hunting behaviour and helps your kitten develop motor skills as well as explore his environment. Fortunately for siblings and their mother, they have a protective layer of thick fur to insulate from most bites and scratches, we are not so lucky.

Kitten biting can develop into an adult cat biting, and they may not have those needle-sharp teeth anymore, but they can inflict much more damage with their strong jaws. An attack is almost always triggered by movement. The cat may lay in wait around a corner and suddenly pounce at you or when petting your cat.

It is believed that kittens who are weaned too early or who have no littermates have a higher rate of play aggression than other kittens who learn to moderate their behaviour with a hiss, a squeal, a swat with the paw or stop playing when they go too far. The kitten quickly learns from this feedback from his siblings and mother.

Differentiating between play aggression and other forms of feline aggression 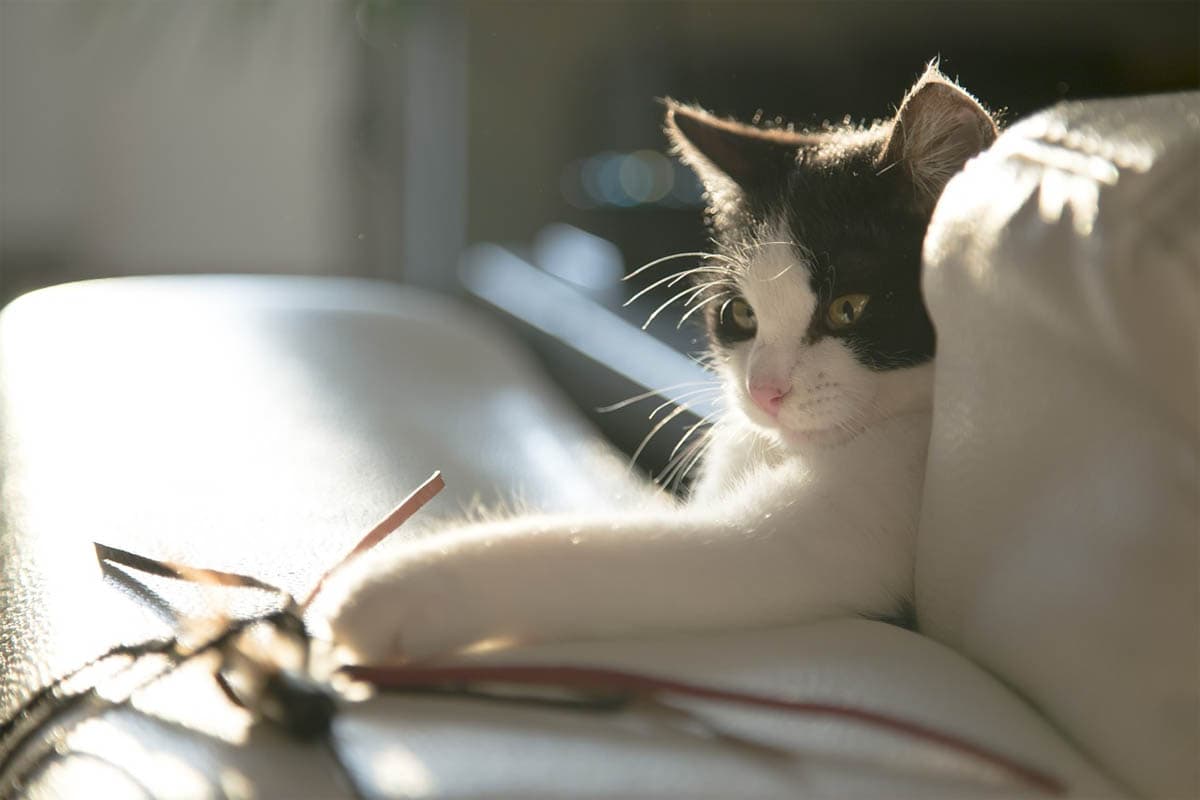 Play aggression typically happens with cats under the age of 18 months. While it may hurt to be bitten or scratched, no severe damage occurs. As Jackson Galaxy, the cat behaviourist often says “if a cat wants to hurt you, he will hurt you”. You may receive a bite or a scratch, but it isn’t delivered with the full force your cat is capable of.

Also, look at the situation. Does the cat appear to be otherwise happy and playful or is he displaying other aggressive signs such as ears back, hissing, growling? A playful kitten generally won’t appear to be aggressive or angry, just in a playful attack mode. When does it happen? Is it when you get to the top of the stairs, are you ambushed by a playful kitten as you walk around a corner? When you pet him? Does he seem happy or angry?

How to stop a kitten biting

There are several things you can do to curb this behaviour.

Redirecting the behaviour – When your kitten bites or scratches, immediately divert him to a more appropriate cat toy that he can take out his aggression on such as a stuffed toy. If he persists, give him a loud growl or a ‘no’ and walk away. The play session is over. The same goes if he has attacked you on the stairs and ambushed you, give him a firm and loud “no”, and walk away. Repeat if necessary.

Your kitten needs to burn off plenty of energy and practice his hunting skills. This is why play is so important, several shorter period of play a day is best for your kitten. Suitable toys include those he can stalk and hunt. Wand type toys are the best for this. Allow him to hunt and stalk the toy, but keep it out of reach. At the end of the play session, let him finally catch it. You should have a variety of toys for your cat to play with including a wand-type toy, toy mice, ping pong balls, laser pointer, boxes and paper bags. You should aim for at least two x 15-minute sessions of play with your kitten.

Two cats are better than one. A lot of cases of play aggression are because the cat doesn’t have a feline playmate to practice his hunting skills on. If you are considering a companion, you should get one that is roughly the same age. There is little point in having a playful 6-month-old kitten and then adopting a 10-year-old cat, who is going to love play aggression about as much as you do!

Reward good behaviour – Cats respond better to positive rewards than punishments (don’t we all?). When your cat is calm or plays without using his teeth, reward that behaviour with a small food treat or some play. If he bites you, walk away. Do this a few times, and he will quickly learn that biting gets him ignored, remaining calm will earn him treats or play.

Trim the claws – Kittens tend to scratch as well as bite. Keeping those needle-like claws blunt will help.

What you should not do

No hitting – If he bites you and you lash out at him, not only will it scare him but it also has the potential to backfire, making him think you are reciprocating the play.

Never use your hands to play with your kitten – Start on the right foot. Hands are for petting, not playing. It may seem harmless enough when the kitten is tiny; it won’t be when he’s bigger and stronger.