Medically known as thrombocytopenia, low platelets (PLT) is a decreased number of platelets in the blood. Normal platelet levels should be around 200,000 µL (microlitre). 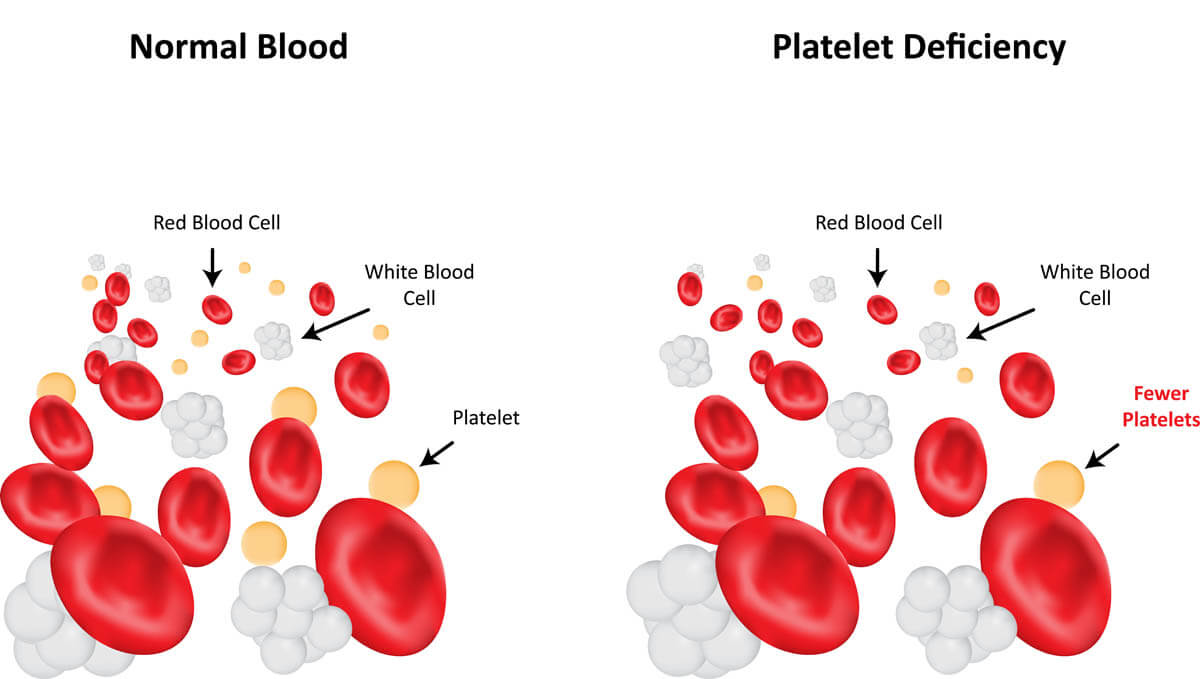 Platelets (thrombocytes) are disc-shaped, nonnucleated cell fragments that circulate in the bloodstream. Their function is to stop blood loss (known as hemostasis). Three mechanisms work together, stopping the flow of blood.

The bone marrow forms all of the cellular components of the blood. Platelets are produced by cells known as megakaryocytes, these giant cells undergo a process known as fragmentation, releasing platelets into the bloodstream. Platelets circulate in the blood for seven days before macrophages destroy them.

Thrombocytopenia can be divided into two types, primary or secondary.

Causes of low platelets in cats

There are several causes of low platelets which can be divided into four main classes:

The most common cause of low platelet count in cats is caused by diseases that affect the production of platelets in the bone marrow.

Leukemia: A cancer of the blood and bone marrow, as the cancer cells take over the bone marrow, there will be less platelet-producing megakaryocytes.

Myelodysplasia syndrome (bone marrow failure disorders): Stem cells in the bone marrow which is responsible for the production of red and white cells, as well as platelets, begin producing abnormal cells

Premature destruction of the platelets

Sequestration in the spleen

This organ filters unwanted material from the blood and fights infection and stores up to 30-40% of platelets. If the spleen becomes enlarged (splenomegaly), it will begin to function abnormally, sequestering a greater number of platelets, up to 90%, and therefore reducing the number of platelets circulating in the blood.

Some forms of cancer can lead to an enlarged spleen. The liver may also sequestrate several platelets; however, it’s not at the same level as the spleen.

Platelets are used up quicker than they can be produced

Disseminated intravascular coagulation (DIC): A condition in which systemic activation of clotting occurs, leading to blood clots forming throughout the body, which can cause blockages in the vascular system as well as using up large numbers of platelets to form the clots, major blood loss can also cause a decrease in platelets.

Many cats with mild thrombocytopenia are often asymptomatic, and the condition only comes to as an incidental finding.

Other symptoms may vary depending on the underlying cause.

Mild cases may require no treatment at all. Corticosteroids may be prescribed to slow down immune-mediated platelet destruction or transfusion of platelets or whole blood, where indicated.

The goal is to find and address the underlying cause. Restrict activity to reduce the risk of injury and/or bleeding for cats with extremely low platelets. Transfusion of platelets or whole blood where indicated.