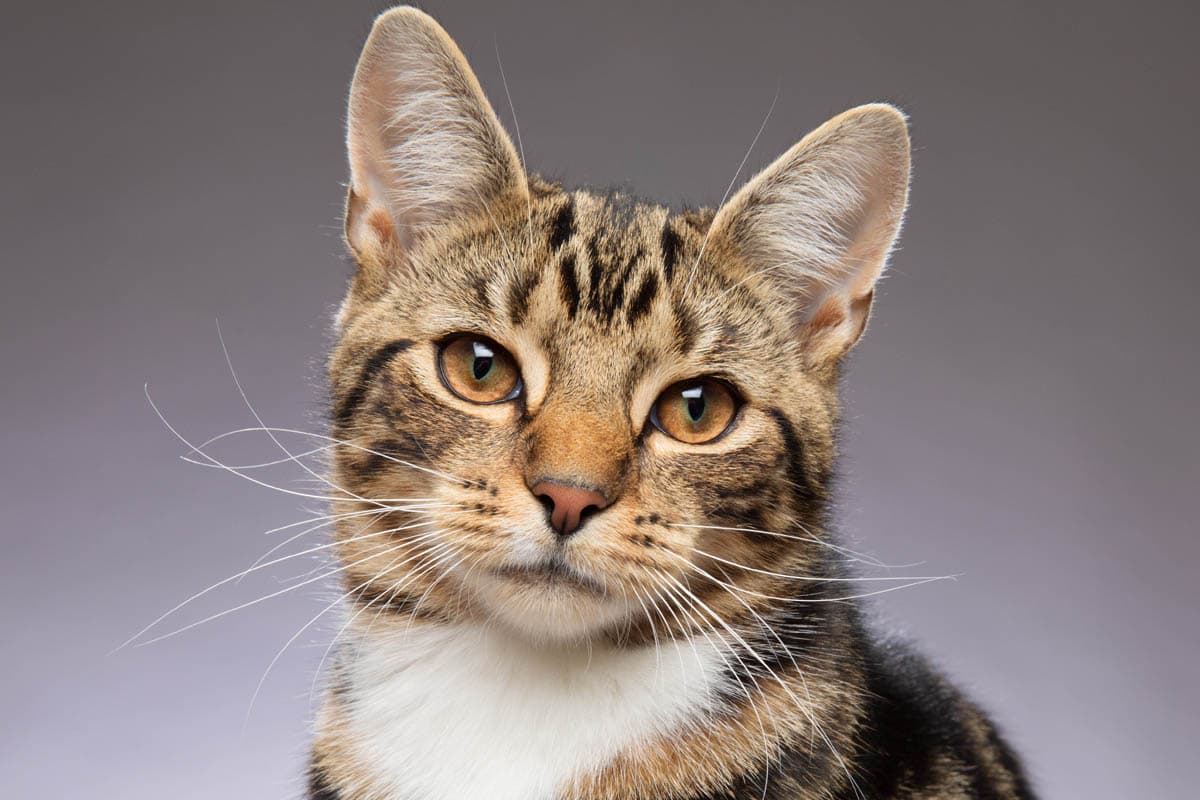 Megaesophagus is an enlargement of the esophagus, the muscular tube that connects the throat to the stomach. Normally, when the cat eats, the esophagus senses the force of the food on the walls, which initiates the process of muscle contraction, which pushes the food down to the stomach (called peristalsis).

Megaesophagus is a multi-factorial disorder in which nerves and/or muscle dysfunction affects the ability of the esophagus to constrict and push food from the throat to the stomach. As a consequence, when the cat eats, food builds up in the esophagus, eventually causing regurgitation (passed back out).

Not only does the cat not receive adequate nutrients, but the presence of food sitting in the throat also predisposes him to aspiration pneumonia.

Megaesophagus can be mild, with only a small portion of the esophagus affected, or affect the entire esophagus.

Regurgitated food looks the same as before it was consumed, vomited food is more sausage-like in appearance.

Regurgitation appears effortless, the cat opens his mouth and out it comes, compared to vomiting which is an active process, which will consist of gagging, retching, and the sides will heave.

The condition may be congenital, meaning present at birth, or acquired. It may be permanent or may be transient (such as with tick paralysis). There is a higher incidence of congenital megaesophagus in Siamese and related breeds.

Acquired megaesophagus may be primary or secondary and has several possible causes. Remember that the esophagus is a muscular tube, so any condition which affects the muscles can cause megaesophagus.

Vascular ring anomaly (persistent right aortic arch): A congenital disorder in which a fetal blood vessel called the right aortic arch, fails to disappear as it should post-birth. This vessel passes close to the esophagus and can cause it to become compressed, blocking the flow of food to the stomach.

Myasthenia gravis: A congenital or acquired neuromuscular disorder that causes muscle weakness. All muscles are controlled by their own nerve, this nerve doesn’t directly connect to the muscle, there is a small gap between the two which is known as the neuromuscular junction.

For a message to be transmitted from the nerve to the muscle, a chemical messenger called acetylcholine bridges the gap. It travels from the end of the nerve and attaches to the acetylcholine receptor. Cats affected by myasthenia gravis have an abnormal transmission between the two.

Glycogen storage disease: An inherited disorder affecting some Norwegian Forest cats characterised by an inability to metabolise glycogen, a stored form of sugar in the body. Glycogen builds up in the tissues including the muscles which can lead to muscle weakness.

Inflammation of the esophagus: Inflammation (esophagitis) can occur due to infection, chronic vomiting, foreign body, cancer, irritation and most commonly reflux.

Thymoma: A rare tumour arising from the thymus gland in the chest.

Venoms or toxins: Botulism, tetanus, paralysis ticks and the Australian tiger snake can cause paralysis.

Congenital or acquired idiopathic: No known cause.

Symptoms can vary depending on the area affected. Cats with congenital megaesophagus typically display symptoms once they wean. However, some nursing kittens may also regurgitate milk through their nose, commonly referred to as milk nose.

If aspiration pneumonia occurs, your cat may experience additional symptoms including:

Your veterinarian will perform a physical examination and obtain a medical history from you, which will include:

Diagnosis is twofold, diagnose megaesophagus and the underlying cause.

The goal of treatment is to address the underlying cause and provide supportive care.

For cats with megaesophagus which can’t be reversed by treatment, the aim is to prevent aspiration pneumonia and ensure adequate nutrition. This may include:

Elevated feeding position: Feeding cats in an upright position to help gravity move down the esophagus. The recommended angle is 45-90 degrees from the floor and the cat should remain in that position for 10-15 minutes after eating. Some suggestions include placing the bowl on a table that is too small for your cat to sit on so he has to eat standing up, holding your cat in an upward position while you or somebody else feeds him, I have even seen one cat held upright in a sling.

Dogs with megaesophagus can be fed in a bailey chair, I am not sure how amenable a cat would be to such a device.

High-calorie diet: In liquid slurry which is easier to travel down the esophagus.

Medications: Metoclopramide or Cisapride which can help to increase motility of the esophagus.

Supportive care: Additional antibiotics and supportive care such as oxygen therapy will be necessary to treat cats with aspiration pneumonia.


This depends on the underlying cause. The outcome is positive in cats with acquired megaesophagus. For cats with idiopathic or congenital megaesophagus, the prognosis is poor.