The Nebelung (pronounced nay-be-lung) is a breed of cat that was developed by Cora Cobb of Nebelheim Cattery.

This rare breed is can only be found in a handful of countries including Russia, USA, Canada Poland, Germany and The Netherlands. 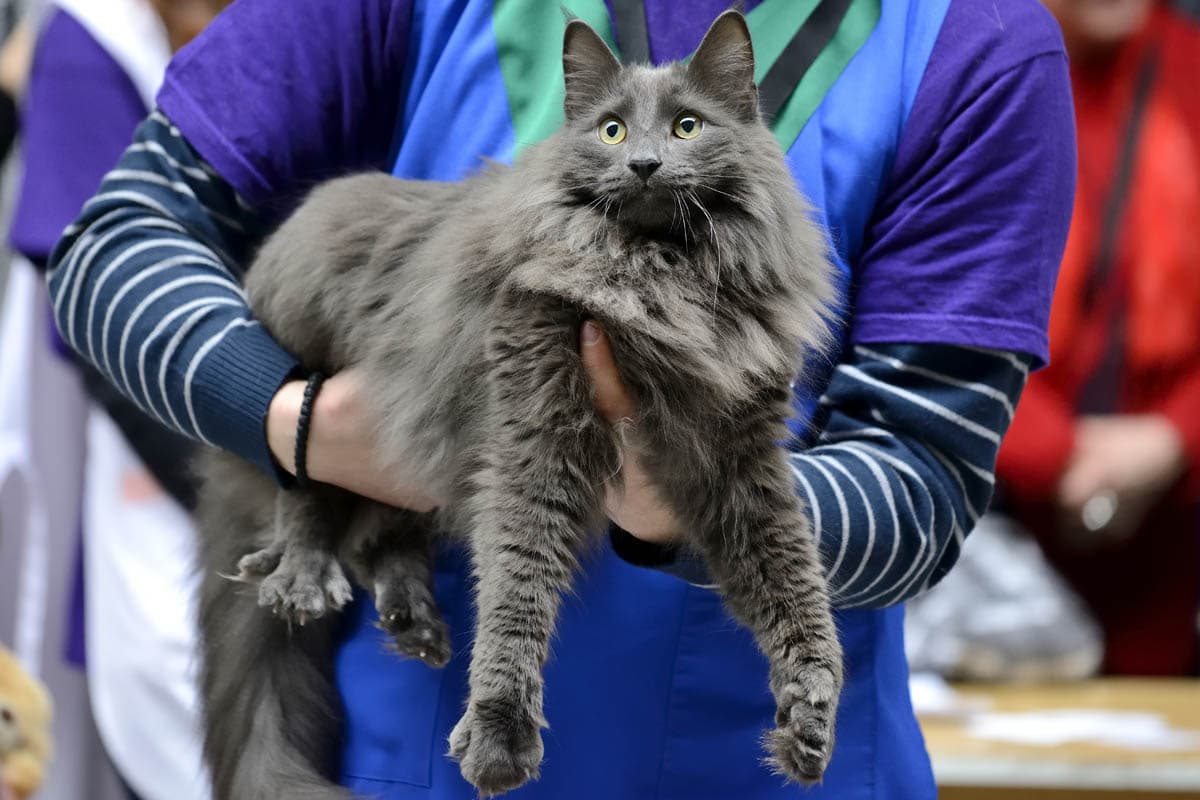 A black domestic shorthair named Elsa and a blue longhaired father with the appearance of an Angora had a litter of six kittens in August 1984. Five of these kittens had short hair, but one, a male named Siegfried had a semi-long coat. Elsa belonged to Karl, the son of Cora Cobb of Denver, Colorado. Five months later Elsa had another litter of seven kittens. This litter contained two long-haired females; one was black, one was blue. The blue kitten was named Brunhilde. Siegfried and Brunhilde became the foundation cats for the Nebelung breed. Both cats had the appearance of long-haired Russian blues.

In 1986 Brunhilde gave birth to a litter of kittens, fathered by Siegfried. It is then that Cora decided to try and establish a new breed from these cats and contacted Dr Solveig Pflueger of TICA who advised her to write a breed standard based on the Russian blue but with the longer coat and to find other people interested in breeding these cats.

Cora applied to The International Cat Association for NBS (new breed status) in 1987, and the Nebelung was awarded Championship status in 1997. There has been some resistance from Russian Blue breeders, but despite this, the breed is slowly gaining in popularity. Other cat councils that recognise the Nebelunc include American Cat Fanciers Association, Livre Officiel des Origines Félines and World Cat Federation.

As some Russian Blue cats carry the recessive long-haired gene, outcrossing is permitted to increase the gene pool of the Nebelung.

The names Siegfried and Brunhilde, as well as the name Nebelung, come from Wagner’s opera The Ring of the Nibelung. 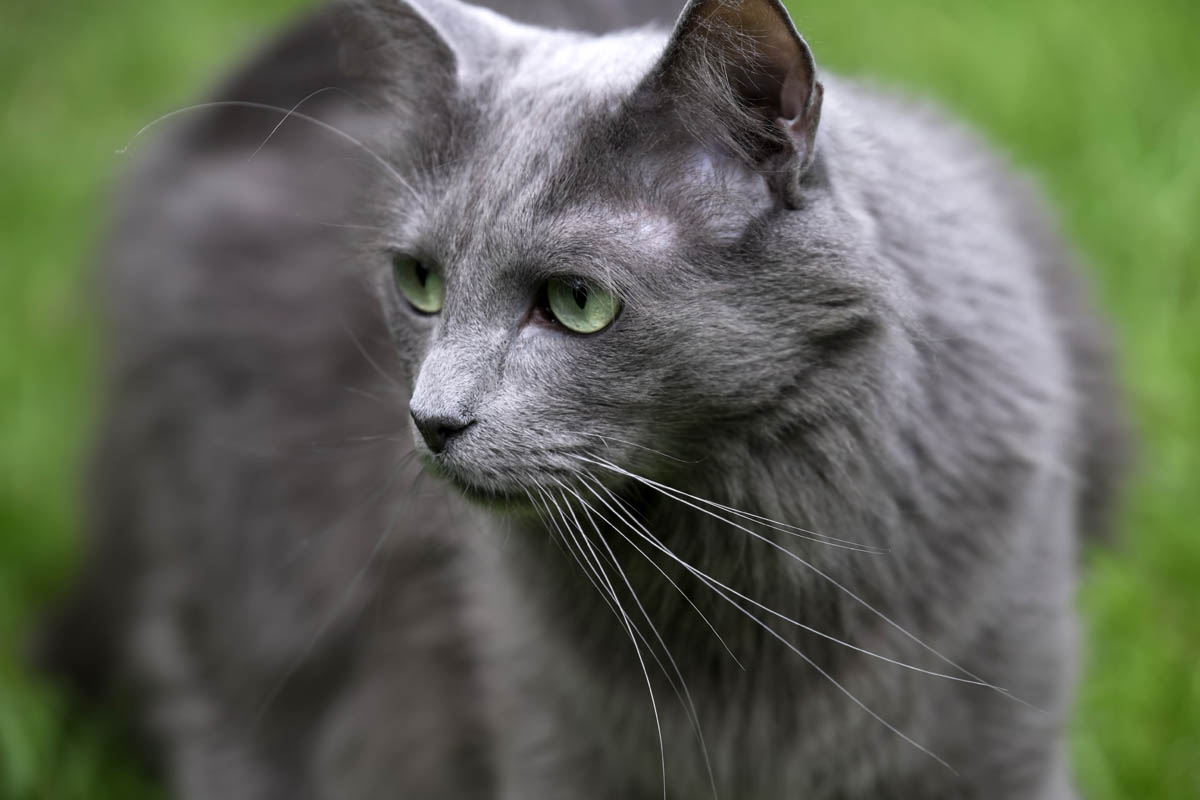 The appearance of the Nebelung is similar to the Russian blue with the exception of the silky medium-length coat which has a thick undercoat.

They are a medium-sized, well-muscled cat with a foreign body type that is lithe and lean with medium bone structure. The legs are long and slender; the tail is long and plumed.

The head is a modified wedge that is longer than it is wide, ears are large and sit on the head.

Oval green or yellow eyes that are set wide apart.

The coat is a blue/grey colour with shimmering tips at the end, it is medium in length, with pantaloons on the hind legs and a ruff around the neck. 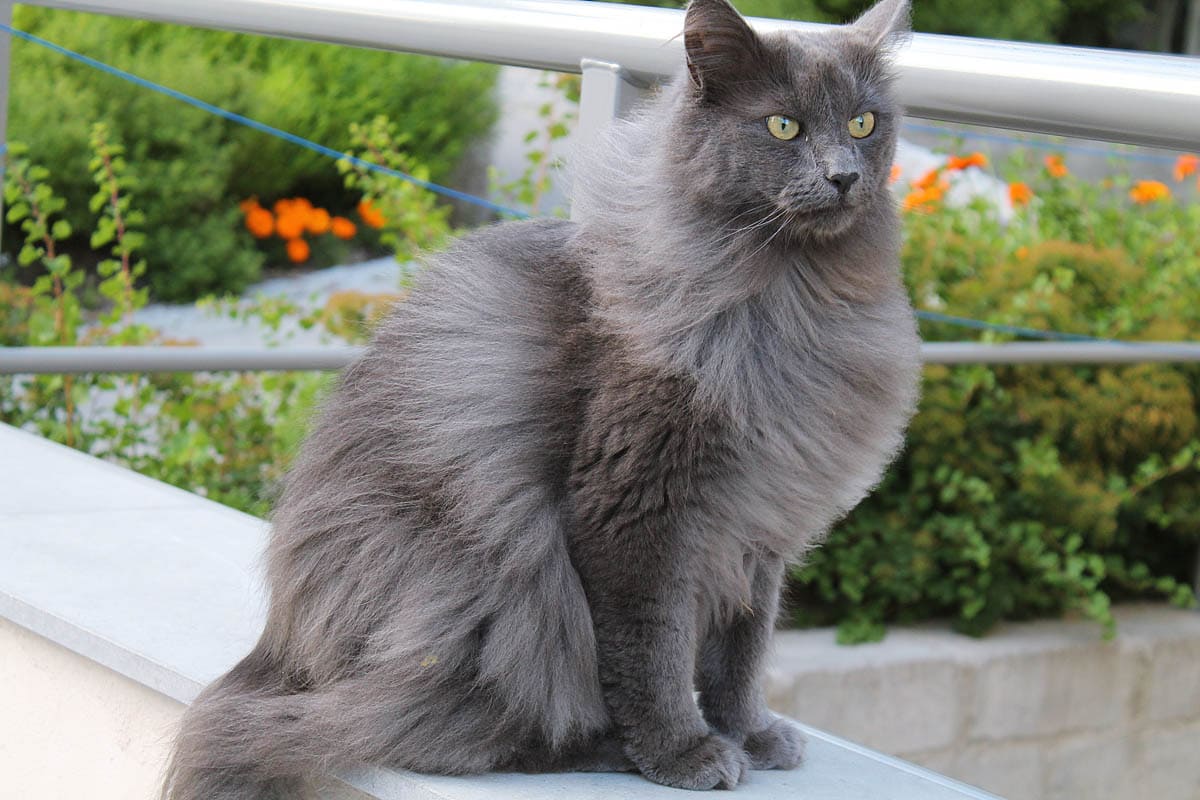 The Nebelung is a gentle and quiet breed of cat who can be quite shy with strangers; however, they are very loyal and affectionate with their owners.

They are an intelligent breed, playful and active. They get along with children but are generally better with older ones. People often describe them as “dog-like” in personality, often following their human companion around the house.

The medium/long coat will require daily grooming to keep it matt free.

Is my cat a Nebelung?

Unless the cat came from a registered Nebelung breeder, then it is doubtful. Only a handful of Nebelung breeders exist across the globe, which includes just one in the United States, and the remainder in Europe and Russia.

Blue/semi-longhaired mixed-breed cats who resemble the Nebelung are not unusual; what they are is a domestic blue longhair (DLH). The blue (grey) coat colour and semi-longhair coat both are common traits.

Update: One cat breeder has successfully imported two Nebelung cats into Australia, and they were accepted for registration with the Australian Cat Federation in June 2019. For more information on the Nebelung in Australia, please visit their Facebook page.