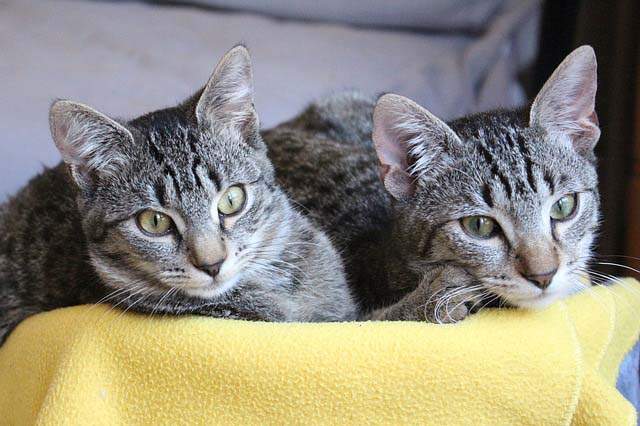 Most pet professionals and pet owners know the common types of aggression in cats are petting induced, predatory, fear-induced, play, redirected and territorial. But there is a little known but commonly seen form of aggression by the name of non-recognition aggression.

Non-recognition aggression is a type of aggression which occurs between household cats who are separated and then reunited. One cat leaves the house for some time (such as a visit or a stay at the veterinary hospital) and when he returns, is met with uncharacteristic aggression by the resident cat(s). The returning cat acts defensively, not understanding what provoked the attack, which escalates the situation further. The term ‘non-recognition aggression‘ describes the situation to a tee, as the resident cat quite literally doesn’t recognise his feline sibling after a period apart. A trip to the veterinarian is the most common scenario, but any situation in which one cat leaves the house, such as a trip to the cat groomer or a cat show can provoke aggression.

This kind and level of aggression can take on many forms including hissing, growling and swiping to a full-blown attack on the returning cat.

For non-recognition aggression to occur, there must be two or more players.

Professionals still don’t completely understand the cause of non-recognition aggression in cats, but speculate it may be due to the following:

Cats rely heavily on their sense of smell, much more than humans who are visual.  A cat who has returned from the veterinarian will have different smell and body chemistry which causes the resident cat to perceive the returning cat as a stranger. The returning cat can take on the smell of the practice itself, as well as medications or treatments (such as shampoos).

The ‘vet smell’ on the returning cat triggers in the aggressor its own negative experiences of a trip to the veterinarian. Let’s face it; most cats aren’t keen on the vet.

Change in behaviour of the returning cat

The behaviour of the returning cat is unusual due to stress, medications, pain, sickness or anesthesia wearing off.

Change in appearance of the returning cat

He may have had some of his fur clipped, is wearing a bandage, an Elizabethan collar of has had a part of his body amputated.

What can you do?

Firstly,  know that this does happen quite often, and it usually resolves itself in time.

When you pick up a cat from the vet, if possible, bring along a piece of bedding (such as a blanket used to line a cat bed) which has the scent of the resident cat and/the house. Place this in the cat carrier for the cat to sit on. It will help to transfer familiar household scents on to the returning cat.

Spray the carrier with Feliway which is a synthetic pheromone which mimics the cat’s own facial pheromones which are calming. This can help to reduce anxiety in the returning cat on his journey home.

Use a Feliway plugin in the home too, to help calm the resident cat during this period.

If the returning cat is otherwise well:

If both cats appear to be fine with each other, open the cat carrier and let the returning cat out. Monitor closely and separate (see below) if any signs of aggression develop.

Re-introduce after 24 hours and watch for signs of aggression. It can help to open the door and feed both cats on either side of the door during this period of re-introduction.

If the returning cat is still sick, or groggy from an anesthetic:

Ideally, the cat should be brought home once the effects of anesthetic have worn off, but sometimes they will be discharged while still under the residual effects of sedation (such as after a minor procedure like desexing) or a dental.

Set up a separate room for the cat to recover in before you re-introduce the two cats. The last thing a sick or groggy cat needs is to have to deal with aggression when he returns home. Place the cat’s food and water bowls, a litter tray and a comfortable bed in the room.  Only re-introduce once the returning cat is feeling better and monitor closely for signs of aggression.

If a fight breaks out

Hopefully, if the introduction is closely followed this should not happen. But if it if does, take care. Never get between two cats who are fighting to avoid accidental injury to yourself. Throw a towel over the cats, clap your hands, or separate with a broom.

Safely move the returning cat to its own room, as outlined above and attempt to re-introduce again after 24 hours.

Signs of an aggressive cat:

Signs of a frightened cat:

Do not attempt to calm down an aggressive cat, give them some space.

How to prevent non-recognition aggression


If you have experienced non-recognition aggression in the past, a slow re-introduction will be necessary.

Does non-recognition aggression happen between cats and their human family?

Not that I have heard of, but many cat lovers can recall their cat’s nose being out of joint after a period of separation such as a holiday or a stay in hospital. This typically presents as the cat ignoring you, or going to the toilet on your bed or clothes instead of non-recognition aggression. We know that the cat does eventually come round; it just takes a few days of love and extra attention.

With patience, peace should return to the home, it sometimes takes a few days, but generally, once the returning cat has lost the foreign smell, and has recovered from the stress and effects of medication, the aggressor should calm down. If there has been no change after a week or so, speak to your veterinarian.