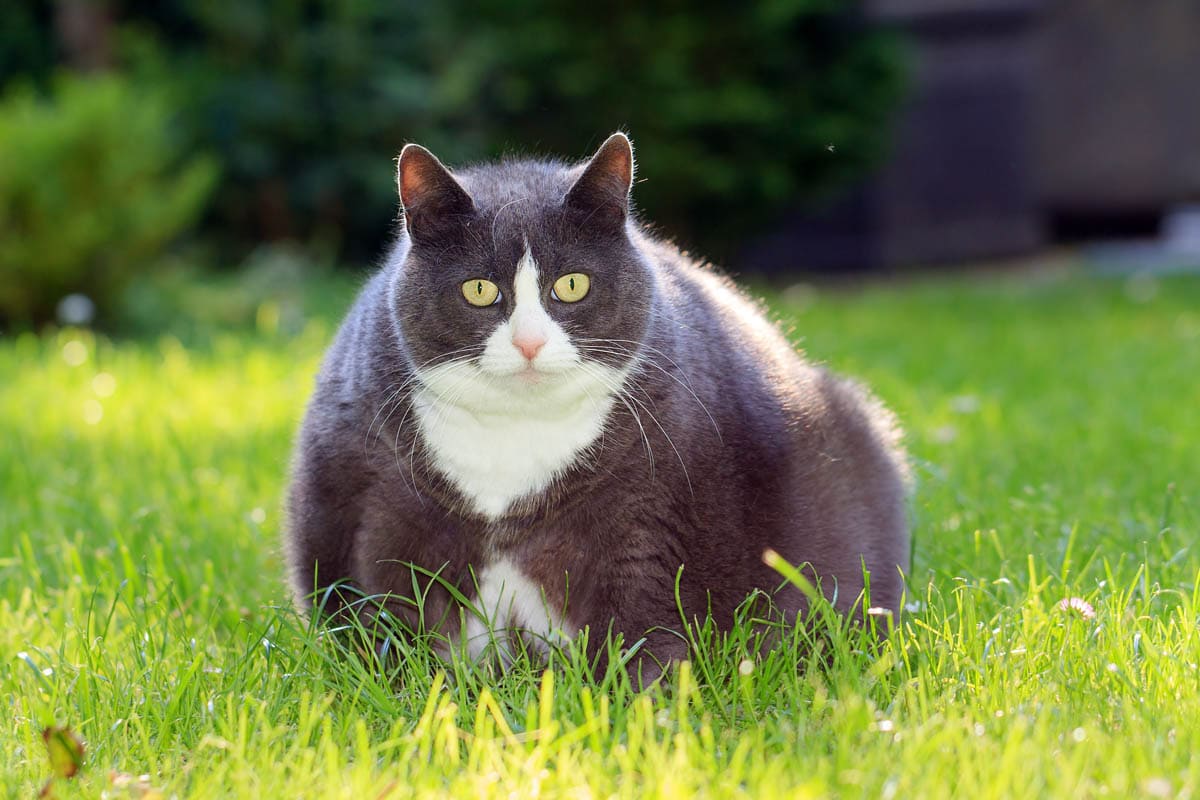 Obesity is a growing epidemic among the cat and dog population and has become the most common nutritional disorder seen in cats. Up to 45% of cats who were examined by a veterinary professional were found to be obese. That is a staggering number and frighteningly it the situation is getting worse.

It’s easy to ignore obesity because for the most part, an obese cat doesn’t look or act sick, but this is a slow and insidious problem which over time has a detrimental to his overall health and quality of life.

People often show love with food, and pet owners can experience guilt if they try to restrict food intake, but we are quite literally killing our cats with kindness.

When cats gain weight, the fat accumulates beneath the skin (subcutaneous fat) which is what most people think of, but there is another type of fat that can be found within the abdominal cavity, surrounding the organs such as the kidneys, pancreas, and liver. This is known as visceral or intra-thoracic fat. What is known in humans is that it is the major culprit in many health problems associated with obesity. This type of fat is active, and it is now believed to be an important endocrine organ. It releases pro-inflammatory chemicals and hormones which lead to inflammation, insulin resistance, and even hunger. That’s right; visceral fat can make you feel hungry.

Some cats have a small paunch towards the back of their belly and just in front of their hind legs. 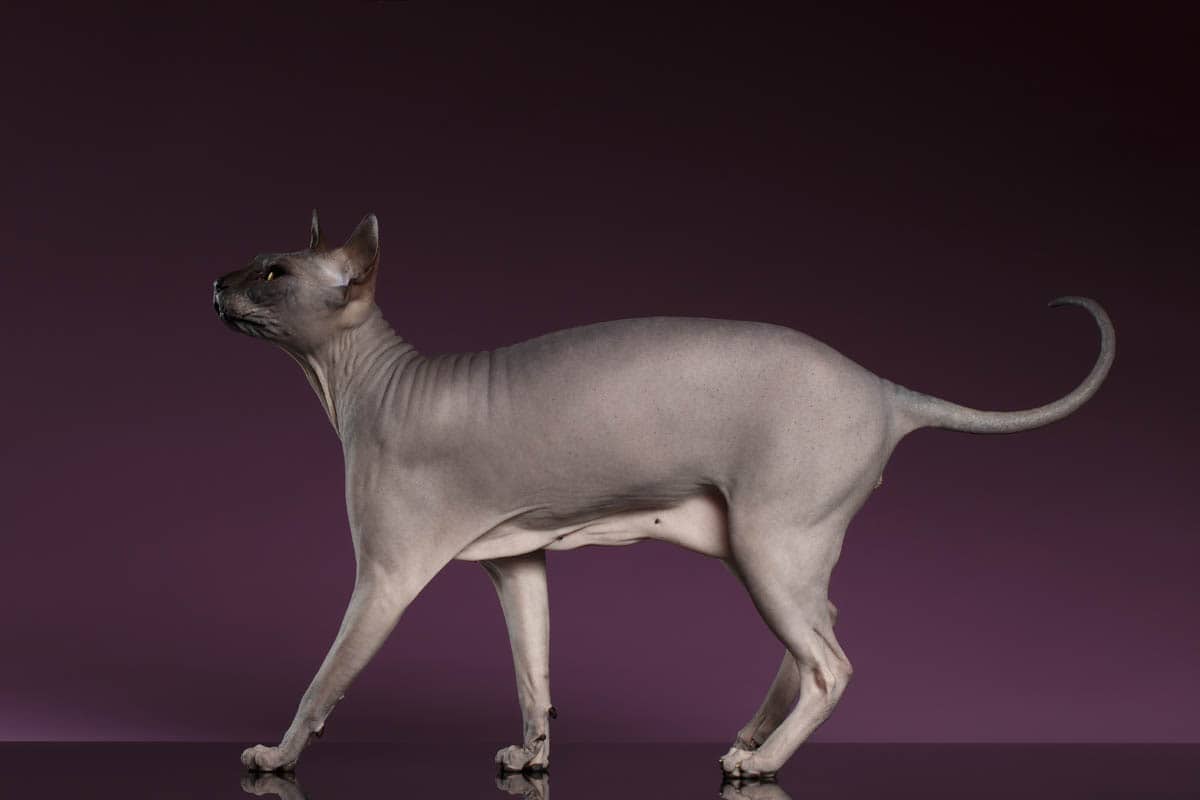 
The most significant factors associated with obesity in cats is overfeeding (particularly free-feeding and high carbohydrate diets) and not enough energy expenditure (calories in vs calories out). If the calories consumed exceed calories burned, then the cat will put on weight.

Dry food has been the holy grail of food for two decades now. There is some movement away from this belief, but dry food is still hugely popular. I am not saying we shouldn’t feed any dry food, but is it as good for our cats as has been touted by pet food manufacturers and several veterinarians?

1) High carbohydrate food. The cat by nature requires a high protein diet, and most dry foods are high in plant carbohydrates. Cats synthesise protein and fat to use as energy; carbohydrates are converted to fat. Have a look at the ingredients list on dry cat food, they are always listed in order of weight, with the first ingredient being the most abundant one. On dry food, this is often cereal-based which is cheap compared to meat.

Cats in the wild ingest a tiny amount of grains and vegetables by eating the stomach contents of their prey, but the bulk of their food comes in the form of protein. More information on reading cat food labels can be found here.

2) Dry diets are very calorie-dense, with only 10% water content. Not only are cats getting excess calories, but they are not getting enough water (which is also filling). A cat’s natural diet of small rodents or birds consists of 70% water. Chronic dehydration can also have serious health on their urinary tract health because many cats don’t compensate for this lack of water in their diet by drinking more.

3) Dry diets are generally left out for cats to free feed and while most cats won’t scoff down their food in the same fashion as many dogs do, not all cats will self-moderate. It is very convenient for cat owners to put a scoop of dry food in the bowl and forget about it until it is empty.

4) Carbohydrates aren’t as filling as protein; therefore it is much easier for cats to overeat.

I also have to wonder if a part of this is down to human behaviour. Often people equate food to love and care. Are we quite literally over-loving our cats to death by our reluctance to say no? It may be as simple as giving them more food at mealtimes to make them happy, giving in to their cries for more food or sharing our snacks with our feline companions.

This may be a controversial one, but so many pet owners are keeping their cats indoors now for their safety (and rightly so). However, most pet owners don’t compensate for this by ensuring indoor cats remain active, with daily play sessions.

Certain medications can lead to weight gain in cats. Glucocorticoids are the most common type of drugs and can induce excessive hunger (known as polyphagia) in cats.

The thyroid gland is located in the neck and is responsible for producing thyroid hormone which regulates metabolism. Hypothyroidism is a rare disease in cats that is caused by an underactive thyroid gland.

Cushing’s syndrome (hyperadrenocorticism) is an endocrine disorder caused by high levels of cortisol in the body either due to a tumour or medical administration. It is a rare disease in cats, typically affecting middle-aged to senior cats.

Excessive cortisol levels cause weight gain due to an increased appetite.

As the cat moves into his senior years his metabolic rate slows down, joints may become more painful, and the senior cat will be less active. A slowed down metabolic rate, and a decrease in activity can both lead to obesity in cats if we don’t modify their diet.

Some cats are more prone to weight gain than others. This is more common in certain dog breeds (such as Cocker Spaniels and Labradors for example) than cats, but it still exists. Domestic shorthairs are the most commonly represented group.

We don’t want anybody to avoid desexing their cat for fear of weight gain. The importance of spaying and neutering all non-breeding cats cannot be overemphasised. Cats who have been desexed are slightly more prone to weight gain than entire cats due to a lower basal metabolic rate (along with decreased activity and increased food intake). However, this can easily be corrected by simply adjusting their diet accordingly just as we should with aging cats. It should be remembered that while desexed cats may be more prone to weight gain, there are several health risks associated with not desexing such as testicular and mammary cancer.

Certain medical tests such as abdominal palpitation and ultrasounds are more difficult in obese cats.

The good news is that if a cat is allowed to lose this weight, its health risks can either be significantly reduced or in some cases completely reversed.

It is always best to ask your veterinarian if he/she believes your cat is obese. Cats come in all shapes and sizes, and therefore it is difficult to determine a standard weight that covers all cats and their differences. Veterinarians prefer to go by body condition and not a number on the scales.

To determine if your cat is overweight or underweight, the following guide can help.

Your veterinarian will perform a physical examination of your cat. He/she will also want to perform some blood tests to rule out a medical cause of obesity such as an underactive thyroid (hypothyroid) as well as evaluate your cat’s overall health with standard tests including biochemical profile, complete blood count, and urinalysis


Veterinarians are there to help your cat and you. If you are unsure that your cat is overweight, book an appointment with your veterinarian. They can guide and help you all the way.

Weight loss requires close veterinary supervision as sudden and rapid weight loss can lead to hepatic lipidosis, which is life-threatening. Therefore NEVER attempt a weight reduction diet on your own. A safe guide is 1 to 1.5% weight loss per week. You and your veterinarian will work closely to ensure weight loss is achieved safely. Regular check-ins will be necessary.

If the cause is medical and not diet-related, treating the condition should hopefully resolve obesity.

Have one person in charge of feeding your cat, it’s too easy for cats to double up on meals otherwise.

Once your cat has reached his target weight, maintain this by feeding a balanced diet that meets but does not exceed his calorific requirements. Remember, the older and less active the cat, the fewer calories he requires. As a general rule of thumb, I like to remove uneaten food after 20-30 minutes.

The prognosis is very good. Diabetic remission has been achieved in many cases once they go down to a healthy weight, he greatly reduces his chances of developing hepatic lipidosis and skin problems should resolve.

Unfortunately, arthritis cannot be reversed, however, there is less pressure on the joints in lighter cats, therefore slowing down the progression of the condition.

2 thoughts on “Obesity in Cats”