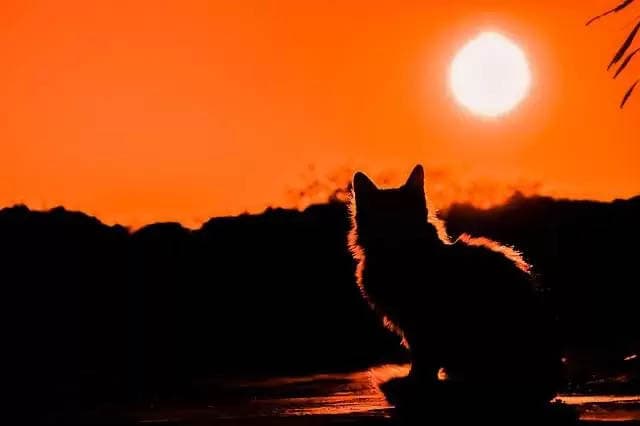 Table of Contents hide
1 Physical signs a cat is dying at a glance
2 About
3 Early active dying and late active dying
4 Other symptoms
5 How to care for a dying cat
6 Frequently asked questions
7 When is the right time to say goodbye?

The physical process of dying can take months depending on the diagnosis and is divided into two stages.

Each cat experiences the process of dying in his or her unique way, below is a guideline of common symptoms which develop when a cat is dying, but not all cats will display all symptoms.

Changes in appetite and thirst:


Every cat’s death is unique, some may experience all of the symptoms, others may not, particularly those who are humanely euthanised.

As circulation decreases, the extremities become cold. This is more difficult to detect in cats due to their fur, but the paws may feel cool to the touch.

The cat is no longer able to stand or move on its own.

As blood flow decreases, the tissues don’t receive enough oxygen, which in turn causes the colour to change from pink to bluish-grey. The cat may try to compensate with open-mouthed breathing.

A normal adult cat’s heart rate is between 130-240 beats per minute. As the body prepares to shut down, the heart slows.

Toxins building up in the body can cause the cat to take on an unpleasant odour.

How to care for a dying cat

The goal of end of life care (EOL care) is to maximise comfort, minimise pain, manage clinical symptoms and provide emotional support to the cat. It will be necessary to have a close relationship with the cat’s veterinarian at this time. The vet can’t be with the cat at all times; you are their eyes and ears for any changes that may necessitate a change in the treatment plan.

Do cats know they are dying?

No, cats aren’t aware they are dying.

Why do cats run away to die?

A dying cat does not feel well, and cats are hardwired to hide when they are sick to avoid predators.

What is a safe pain relief for a dying cat?

There are no safe over-the-counter medications for cats to take. If necessary, your cat’s veterinarian will be able to provide you with analgesics (pain killers) to ensure the cat remains comfortable.

How do you comfort a dying cat?

A dying cat is unable to effectively regulate its body temperature, so make sure the room temperature is comfortable for your cat.

Do cats close their eyes when they die?

The eyes are open, and the pupils remain dilated/large (see image above) and fixed even in response to light.

Do cats purr when they are dying?

Yes, some cats will purr when they are dying.

How do I know that the cat has passed away?

There are several indicators a cat has died which have been covered in this article.

When is the right time to say goodbye?

It is never easy to make that final call. Was it too early or too late? Did you do enough, fight hard enough? Are you letting your cat down? All of these emotions are completely normal. It is counter-intuitive to choose to end the life of a beloved pet and family member, but to put our feelings aside, this is the final gift we can give to our cat.

Grieving starts before your cat has passed away, not after, unless it was a sudden death. Many carers have been responsible for the palliative care of their cat for weeks or months, which is physically and emotionally hard.

We sign a pact when we adopt our pets to stay with them until the end, and where possible, enable them to have a peaceful passing. You are not letting them down by choosing euthanasia; you are giving them a peaceful death. Remember, the word euthanasia comes from the Greek — eu which means goodly or well and thanatos which means death.

One week too early is better than one day too late.