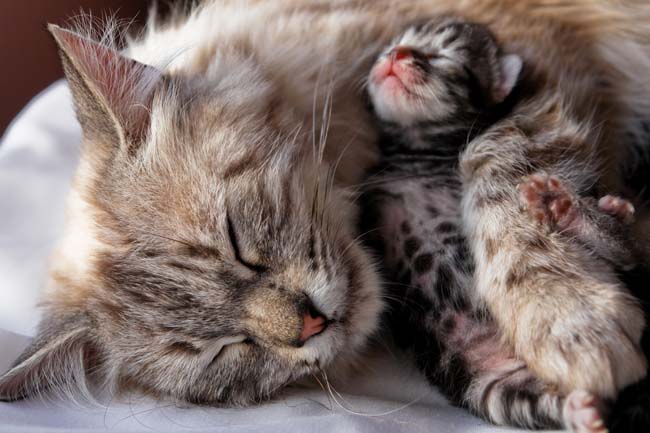 Postnatal complications can arise in any cat and it is prudent that the cat owner is aware of potential problems and know what to look out for after your cat has given birth.  Be alert and watch for symptoms so that problems can be picked up and treated early.

Some discharge (lochia) is normal for up to two weeks after delivery, which will be watery and blood tinged.

Inflammation of one or more mammary glands occurs when the lactating queen’s mammary gland(s) becomes inflamed, blocked or infected.

Inflammation of the lining of the uterus (endometrium) postpartum most often due to a bacterial infection from retained placentas, kittens or unsanitary conditions.

Agalactia is a complete absence of milk and dysgalactia is a decreased milk supply. Both are caused by inadequate nutritional support of the queen,  large litter size, deformed nipple(s) or occasionally cesarean sections.

Encourage nursing to assist with milk production.  Provide access to fresh drinking water at all times and a high-quality diet. By the second week of lactation, she will require up to three times the amount of calories as a non-pregnant cat. Kittens may cry and fail to thrive. Your veterinarian may recommend you supplement the litter or he may prescribe a medication to assist with milk production or both.

Also known as milk fever or puerperal tetany, eclampsia is a life-threatening condition which occurs in late pregnancy or after birth as a result of blood calcium levels becoming dangerously depleted, leading to hypocalcemia.

Treatment will depend on the cause, it may include: