The RagaMuffin is a close relative to the better known Ragdoll who in past times could be found in a number of colours.

It has a similar temperament to its Ragdoll cousin, with a friendly and laid back personality and a beautiful soft coat.

The history of the RagaMuffin isn’t well documented but what is known is that the breed originated from the Ragdoll cat. A group of Ragdoll breeders splintered from the International Ragdoll Cat Association, a group owned and run by Ann Baker, the creator of the Ragdoll breed. Ann had always been controlling over this group and how the Ragdoll breed (then named the Cherubim) progressed.

The IRCA was a private registry; Ann received royalties from each Ragdoll kitten sold and made breeding decisions on behalf of the members. By 1993 a group of breeders tried to persuade a then terminally ill Ann to hand over the running of the IRCA to them; however, she refused. It was then that breeders (Janet Klarmann, Curt Gehm, and Kim Clark) left the group and pushed forward to have the Ragdoll cat accepted with the mainstream cat associations.

Due to the small gene pool, outcrossing with Persians, Himalayans, and domestic longhairs was permitted. This ended with ACFA registered cats in 2010. 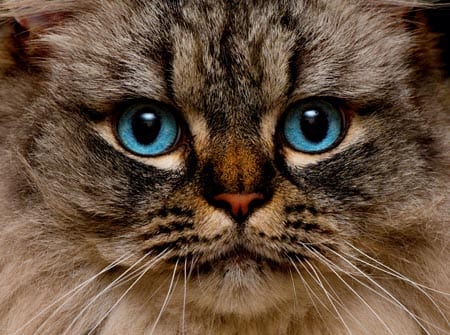 Dense and luxurious. The hair is longer on the face and neck.

The body muscular with a broad chest and strong shoulders.

The RagaMuffin reaches full maturity around four years of age. Males are noticeably larger than females.

Broad with a modified wedge. There is a noticeable nose break. The eyes are large, round and set wide apart and come in several colours. Ears are medium and tilt slightly forward.

The RagaMuffin is a beautifully sweet-natured breed of cat. They are intelligent, affectionate, loving and people-oriented and get along well with children and other pets.

They are not as athletic or energetic as some of the other cat breeds and have a habit of going floppy when picked up. That’s not to say they don’t enjoy playing, though. Due to their slow maturity, the RagaMuffin retains a kitten-like playfulness for many years.

The long hair will require daily grooming to avoid mats. This should only take 5-10 minutes.