The Ragdoll is one of the largest breeds of domestic cat in the world and is prized for its colourpoint coat and striking blue eyes.

Ragdolls are a laid back breed and extremely people-oriented, making them a great family pet and one of the most popular cat breeds. The name comes from their tendency to flop like a ragdoll when they are picked up.

The history of the Ragdoll cat begins in the 1960s with a white Persian/Angora type cat by the name of Josephine (pictured below). Some say she belonged to Ann Baker, a Persian breeder from Riverside, California; others claim that Josephine was a feral cat who lived in a colony belonging to her neighbours, the Pennels.

What we do know that Josephine was hit by a car, and this is where the story takes on a somewhat bizarre twist. Ann Baker took her to the veterinary hospital at the University of California, where she claims Josephine was subjected to government testing, which resulted in her being relaxed when picked up and no longer feeling pain. Ann noticed that the next litter of kittens were larger and all had the same laid-back temperament as Josephine.

It is Daddy Warbucks, Tiki, Kyoto and Fugianna who were registered as the first Ragdoll cats with the NCFA in 1966. Daddy Warbucks being number 1.

During this time, several breeders became involved in breeding the Ragdoll cat, and in 1971 Ann founded the International Ragdoll Cat Association (IRCA) and placed strict rules on how Ragdoll cats could be bred. Several breeders rebelled against Ann’s strict regulations and set out to establish the breed without her involvement. Laura and Denny Dayton were a couple who decided to breed the Ragdoll cat so that other cat associations would eventually accept it and in 1975 the Ragdoll Fanciers Club International (RFCI) was formed.

In 1981, Lulu Rowley of the Petil-lu Cattery purchased four Ragdolls from the Daytons and introduced the breed to Britain. 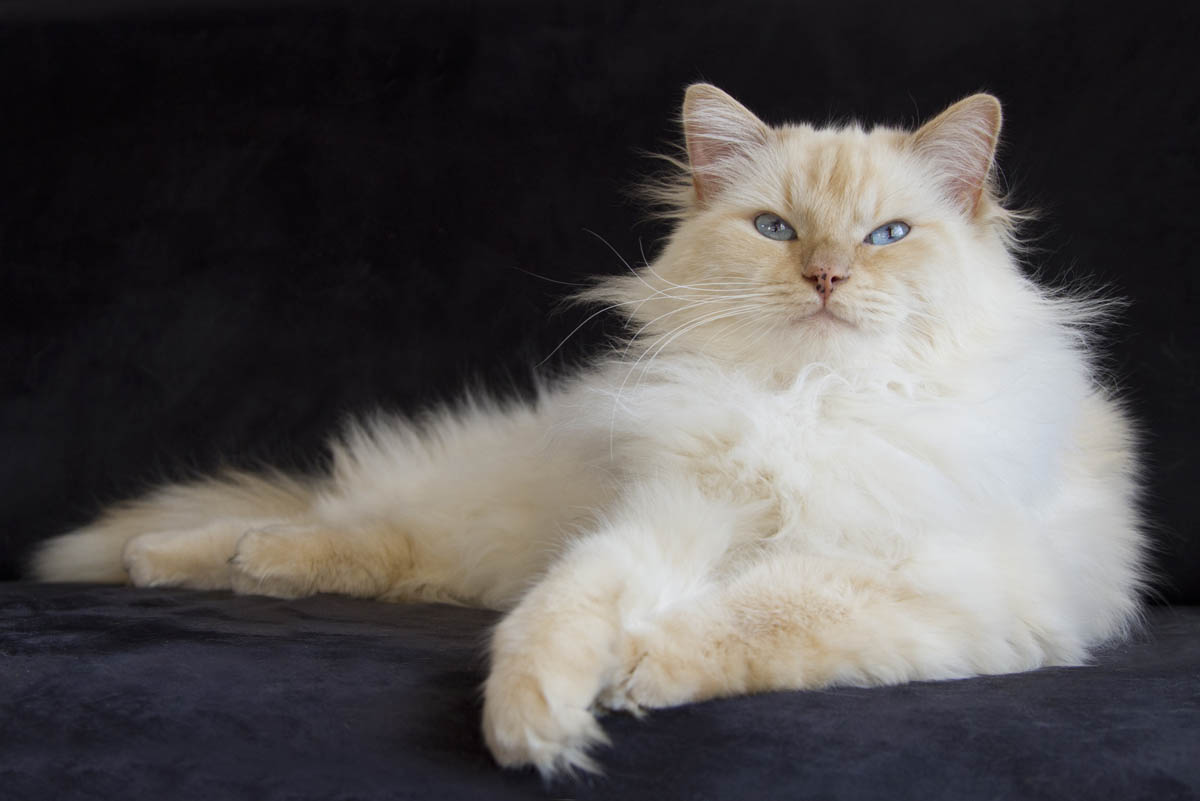 The Ragdoll is a laid back and calm cat with a loving disposition. Despite claims made by Ann Baker that they feel no pain, this is not true. All cats feel pain, including the Ragdoll. What may be the case is that they hide it better.

Dog-like in nature, Ragdolls thrive on companionship and will greet their family at the door and follow them around the house. Ragdolls get along exceptionally well with children and other pets. It is not uncommon for Ragdolls to choose one favourite human in the family, although they will get along with everyone.

The Ragdoll is somewhat of a contradiction, both playful and relaxed at the same time. It is said that they are easy to train and enjoy playing fetch with their owners. Ragdolls are lovely lap cats and quite happy to curl up on the sofa with you. While they love to be close to their family, Ragdolls aren’t as demanding as other cat breeds.

Ragdolls make excellent apartment-dwelling cats due to their quiet and relaxed nature as well as being happy to spend time with their human companions.

The legs are in proportion to the body with substantial boning. Paws are large and round. Tufting between paw pads is desirable.

The tail should be equal length to the body, thicker at the base and tapering at the tip.

The head is broad and a wedge shape with well-developed cheeks, and a strong chin. Ears are medium and are set as much on the top of the head as they are on the side; they are broad at the base and round at the tip. Eyes are oval and a stunning blue colour.

The semi-longhaired coat is silky, lying smoothly on the body with a sparse undercoat. Kittens are all-white when they are born. Their mask, ears, and tail darken up later. The Ragdoll comes in three patterns, bicolour, mitted, and colour point.


The Ragdoll comes in a range of colours, including:

See the end of the article for photos of the different Ragdoll colours.

It is always best to meet the Ragdoll in person and if possible, also the parents.

Purebred cats may be ‘breeder, show or pet’ quality. A breeder is just that, and should only be sold to a registered breeder. A show quality cat means it meets the standard and is an excellent example of the breed. A pet quality cat means it may have a slight fault somewhere, which is almost always cosmetic. This may be a white spot where there shouldn’t be one, a kinked tail or some other minor fault. Pet quality make great cats and cost less money than a show cat.

Kittens should have been wormed, vaccinated and treated for parasites. Many breeders now opt to have kittens spayed or neutered before going to their new home. Kittens bounce back from this surgery.

Get any guarantees in writing from the breeder.


The Ragdoll is a healthy breed of cat with few health problems, but as with all breeds, Ragdolls may be at higher risk of developing certain health conditions including:

There is a genetic test for the hypertrophic cardiomyopathy mutation, always ask the breeder if they test their cats.

The sparse undercoat makes the Ragdoll cat’s coat less likely to form mats compared to other longhaired breeds, however, Ragdoll cats can still benefit from a brush two to three times a week.

Trim the front claws every 4-6 weeks. Both grooming and claw trimming should begin in kittenhood so that your cat becomes accustomed to it from a young age.

Due to their friendly and trusting nature, Ragdolls should not be allowed to free roam, the best compromise is to provide a safe cat enclosure.

Dental care is essential to prevent gum disease which impacts not only the teeth but the cat’s overall health. Brush teeth daily with a cat toothbrush and toothpaste (don’t use human toothpaste), or give him chunks of human-grade steak or chicken necks 2-3 times a week.

An annual health check is essential for all cats which should increase to twice a year for cats over seven.


How long do Ragdoll cats live?

The Ragdoll lives between 12-15 years.

No, the Ragdoll is not hypoallergenic.

Why do Ragdoll cats go limp?

The Ragdoll goes limp because it is a laid back breed of cat.

Yes, Ragdoll cats feel pain just like any other cat.

The Ragdoll is not an overly high-maintenance cat, however, their long coat will need to be brushed once a day to prevent mats from forming. Due to their friendly personality, the Ragdoll does not like to be left alone for extended periods.