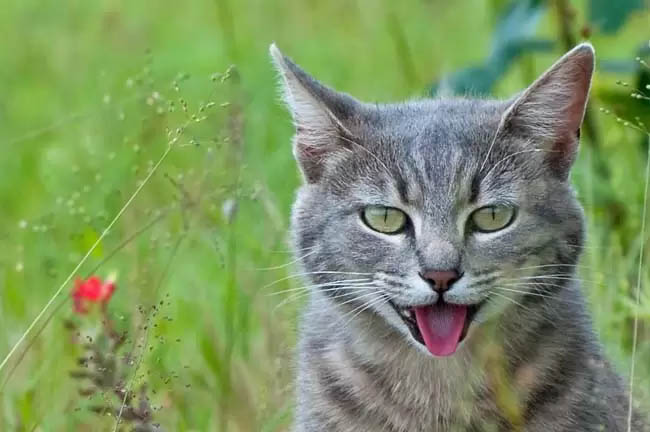 Rapid breathing (tachypnea) is a respiratory disorder characterised by abnormal breathing that is rapid and shallow. It is caused by a reduced level of oxygen, mechanical disorders (where the lungs aren’t able to expand as they should, usually due to a build-up of fluid in or around the lungs), and physiological disorders in which the cat’s respiratory centre in the brain is overstimulated.

When is rapid breathing normal?

Rapid breathing after exercise or exertion or at times of stress, such as a trip to the veterinarian and will settle down on its own.

The average respiration rate for cats is 20-30 breaths per minute, which is approximately twice that of humans. There are several types of breathing disorder which can affect cats; this article will focus on tachypnea only. Differences in the other types of breathing can be subtle, and many definitions can cross over.


There are three leading causes of rapid breathing in cats, reduced oxygen, mechanical difficulty and physiological.

Reduced oxygen levels in the blood:

Anemia is a condition characterised by a reduced number of red blood (also known as erythrocytes) cells in the blood. Is not a disease in itself but a symptom of an underlying condition. It can be due to the premature destruction of the red blood cells, decreased production (due to cancers, kidney disease, certain infections or drugs), blood loss, tumours, blood clotting disorders and parasites such as fleas and hookworm.

The goal is to treat the underlying cause where possible and provide supportive care which may include:

Pneumonia is an infectious/inflammatory disorder of the lung parenchyma. Tiny bronchi fill the lungs; each one ends in smaller sacs known as alveoli which contain tiny blood vessels. Oxygen is added to the blood and carbon dioxide removed via the alveoli. Pneumonia causes these alveoli to fill with pus and fluids which affect the lung’s ability to exchange gases. There are several causes including infection (viral, fungal, bacterial, parasitic), aspiration of gastric contents or medications.

Hypoglycemia is a life-threatening condition in which the blood sugar levels drop dangerously low. The pancreatic beta cells produce the hormone insulin which helps to move glucose from food into the cells (for energy). It is not a disease in itself, but it is a symptom of an underlying disorder. Causes include excessive insulin administration in the diabetic cat, decreased glucose production (missed meal, vomiting, certain medications, glycogen storage disease), and excessive glucose consumption due to sepsis (bacterial infection of the blood).

Congestive heart failure is a life-threatening disorder which occurs when the heart doesn’t pump blood as efficiently as it should which causes fluid to back up in the lungs and abdomen, while other organs don’t receive enough blood to function properly. It can be caused by heart diseases such as cardiomyopathy, heartworm, myocarditis, endocarditis, congenital disorders, high blood pressure, tumours, hyperthyroidism and acromegaly.

Treatment for congestive heart failure is aimed at managing the medical cause of the condition as well as relieving symptoms associated with fluid build up in the lungs, pleural space, and abdomen. In a few situations, once the cause has been treated (such as hyperthyroidism), the heart may recover, however, most cases of CHF are irreversible, but it may be managed to slow down the progress. Stabilising your cat if he has fluid build up in the lungs or pleural cavity, relieving symptoms and this may include:

Also known as dirofilariasis, heartworm disease (HW) is a serious parasitic infection caused by the nematode Dirofilaria immitis which lives in the pulmonary arteries, lungs, and hearts of cats. Heartworms are a type of roundworm, with adult heartworms reaching a length of 12 to 30 cm. Microfilaria (baby heartworms) are present in the blood of an infected animal (in most cases, a dog), when a female mosquito feeds on the blood, microfilaria are also ingested, once, inside the gut of the mosquito, they undergo further development before migrating to the labium (a part of the mouth) of the mosquito. When the infected mosquito feeds on another host (in this case, your cat), the larvae move from the mouthpart and onto the skin of the cat (or dog), from there, they enter the bloodstream via the bite wound left behind by the mosquito.

There is no approved adulticide (medications to kill adult heartworms) treatments for cats. Adulticides are themselves dangerous. A single dead worm can be fatal in cats as it can break away and cause a blockage of the pulmonary artery (pulmonary embolism). Heartworms in cats have a shorter lifespan than those in dogs; therefore it is preferable to manage symptoms and use a wait and see approach.

Pleural effusion is an abnormal buildup of fluid up in the pleural cavity, the thin fluid-filled space that lies between the lungs and the chest wall. It is a symptom, with an underlying disorder causing this fluid to build up. The buildup of excess fluid leads to difficulty breathing, due to the inability of the lungs to fully expand. Causes include congestive heart failure, liver failure, fluid overload, blood clotting disorders (usually due to ingestion of rat poison), lung lobe torsion, pulmonary edema, and diaphragmatic hernia.

Treatment for the underlying condition varies depending on the cause. But may include:

Pulmonary edema is the buildup of fluid in the within these air sacs leading to shortness of breath. Located in the lungs are thousands of air sacs (alveoli) which are small balloon-like structures where the exchange of carbon dioxide and oxygen occurs. Tiny capillaries surround the alveoli on the outside. When the cat breathes in, air enters the lungs, causing the alveoli to expand. Oxygen passes from the alveoli and into the capillaries, carbon dioxide from the capillaries pass into the alveoli and is exhaled out. The most common causes of pulmonary edema relate to problems with the heart, such as hypertrophic cardiomyopathy. Heart diseases can lead to reduced movement of blood through the capillaries in the lungs. As the blood flow slows, fluid leaks out of the vessels into the airways. [1]

The goal of treatment is to address the underlying cause as well as manage symptoms; this can include:

Pyothorax (pleural empyema) is the presence of pus in the pleural space in the chest cavity, the thin, fluid-filled space that lies between the lungs and the chest wall. Any pathogenic organism can cause pyothorax including fungal, viral, bacterial or protozoal; however, a bacterial infection is by far the most common pathogen. The collection of pus is due to dead white blood cells and dead bacteria. Common bacteria involved in pyothorax include Pasteurella spp (the most common), Nocardia spp, Streptococcus spp, Clostridium spp, Proteus spp, Bacteroides spp and Mycoplasma spp.

There are several possible ways cats can develop pyothorax. In many cases, the initial cause may remain undetermined. Some causes include bite wounds, trauma, inhalation of an object such as a grass awn, bacteria ascending from the mouth, diffusion of bacterial infection, parasitic migration, perioperative aspiration, tumours, ruptured abscess and lung lobe torsion.

The goal of treatment is to relieve symptoms and treat the underlying cause. Antibiotic therapy will be necessary for up to six weeks. While he is in care, he will receive the following treatments:

Airway obstruction is a partial or blockage in any part of the airway which prevents air from getting into the lungs. A blockage can be due to an ingested foreign object, asthma or a tumour or growth.

The goal of treatment is to find and address the underlying cause; this can include:

Bleeding of the lung which is caused by a tear or crush due to trauma. Blood clotting disorders can also lead to bleeding in the lungs.

The goal of treatment is to manage symptoms and address the underlying cause; this may include:

Pulmonary thromboembolism (PTE) is a blockage in the pulmonary artery or one of its branches in the lungs that is caused by an embolism, a substance which has travelled through the circulatory system from another part of the body. The most common cause of pulmonary thromboembolism is a blood clot other causes include heartworm and a globule of fat. Blood can clot as a result of increased clotting disorders, heart disease, tumours, heartworm, polycythemia (increased red blood cells), and damage to the blood vessel walls.

Supportive care, thromboembolic drugs and treating the underlying cause.

Immediate treatment to stabilise your cat.

Other causes of rapid breathing not related to breathing difficulty can include the following:


Additional symptoms will vary depending on the underlying cause.

Any breathing difficulty is a medical emergency and requires urgent veterinary attention.


Your veterinarian will perform a complete physical examination of your cat including listening to the heart and lungs for signs of heart abnormalities or fluid build-up in or around the lungs.