A gene is a segment of DNA (deoxyribonucleic acid) that codes specific processes in the cat’s body by encoding proteins. These codes are the blueprint for the cat’s body and can encode proteins to build structures in the body (heart, eyes, bones etc), or provide directions for different processes, bodily functions and influence the cat’s physical appearance (hair and eye colour, coat length, ear shape etc).

Every cell in the body contains 19 pairs of chromosomes that contain hundreds or thousands of genes. Each cat inherits one copy of every gene from the mother and one copy from the father, to make a pair. The dominant wild type gene is the gene that would usually be present at the locus in the wild cat (Felis sylvestris) and the allele is a different version or versions of the wild-type gene which may be dominant or recessive.

Below is an example of how the recessive long hair (l) works compared to the dominant shorthair (S). Remember, the cat always inherits two copies of each gene, one from each parent. When an organism (cat, dog, human, kangaroo etc) carries two versions of the same gene, he or she is homozygous, when they have two different copies of a gene they are heterozygous. 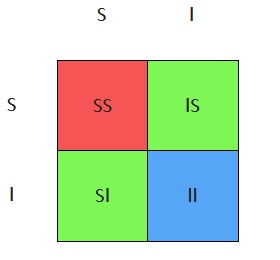 Sometimes it is easy to see that a cat carries recessive genes for a particular trait, for example, pointed cats or long coats carry the recessive gene for those traits. This observable outward appearance is known as phenotype. But if the cat is heterozygous, he or she carries one dominant gene, and the recessive gene is in effect switched off. This can make it difficult to know if the cat carries a particular trait (good or bad) and explains how certain diseases can appear when both parents are healthy. This is known as a ‘carrier’. There may be a long-haired kitten born to two short-haired cats.

Cystic fibrosis and sickle cell anemia are two well known genetic disorders in humans that are caused by recessive genes. Unless genetic testing is carried on the future mother and father prior to conception, most people are unaware they carry the gene. Every human carries at least two lethal mutations but most of us won’t pass these on to our children unless our partner also carries the same mutation. The closer we are related to our partner, the greater the risk.

What is a mutation?

The word mutation sounds quite Frankenstein like, but mutations are how we have all evolved. Mutations are changes in genetic sequences that lead to changes. When a spontaneous mutation occurs, it may confer a benefit or be detrimental. Long-haired cats stand a much better chance of surviving the harsh Siberian winters than shorthaired cats. Those animals who survive and thrive are more likely to find females to mate with and pass on the ‘mutant’ gene. Over time, more and more cats with long coats are born and survive the harsh climate. If a mutation occurs and a bald cat is born in the Siberian wilderness, he or she stands a much lower chance of survival and passing on the gene to future generations.

Physical characteristics due to recessive genes


The following inherited physical traits are cosmetic only and have little to no impact on the health or the welfare of the cat. In fact, a number of cat breeds have been developed from spontaneous mutations which have occurred in stray cats.

Diseases in cats due to recessive genes

There are more than 250 dominant and recessive hereditary diseases that can affect cats. DNA tests have advanced in leaps and bounds over recent years, and many of these inherited conditions can be tested for with potential breeding cats, who can be removed from breeding programmes if they are found to be carriers.

Why is this information important?

Breeders and pet owners need to know if cats carry mutations that may impact the health of a kitten or future offspring. Some breeds are at more risk for particular inherited conditions and pet owners should always ask potential breeders if they test for genetic diseases, and ask for proof. Some inherited diseases are obvious at birth, but others may be progressive, so a kitten looks fine but his or her health slowly declines. This is heartbreaking for the affected cat and his or her family.

Breeders should screen all potential breeding cats and eliminate those who carry certain mutations (for diseases, or detrimental physical characteristics) to prevent them from being passed on.