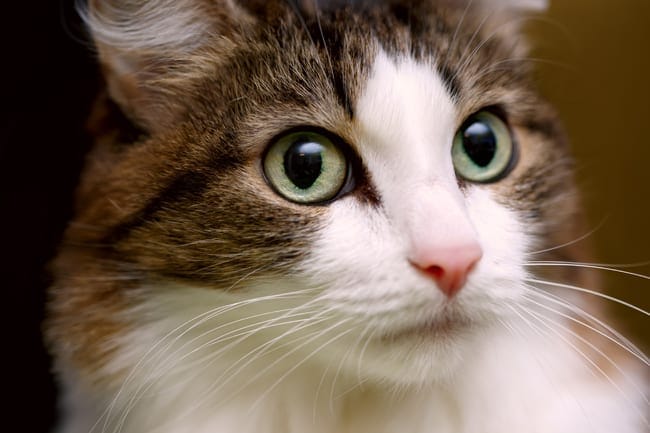 Table of Contents hide
1 At a glance
2 What is aortic saddle thrombosis?
3 Causes
4 Symptoms
5 Diagnosis
6 Treatment

What is aortic saddle thrombosis? 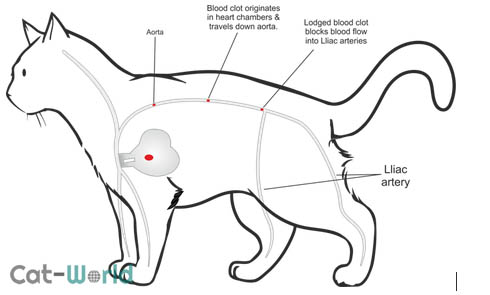 Saddle thrombosis (aortic thromboembolism) is a life-threatening condition in which a blood clot (thrombus) forms in the heart and then all or part of it dislodges and travels down the abdominal aorta where it eventually becomes lodged at the junction of the iliac arteries of the hind legs which blocking blood flow to the hind limb(s).

Less common locations the emboli may travel to include the arteries supplying the kidneys, lungs, gastrointestinal tract, forelegs, and brain. However, this article will focus on saddle thrombosis only which affects the rear legs, the term saddle thrombosis is due to the emboli lodging in the junction and draping down into the iliac veins, giving it the appearance of a saddle. Studies show between 69-90% of cats with thromboembolism have heart disease and up to 1/3rd of cats with heart disease will develop a blocked artery due to thromboembolism. Other causes include neoplasia and hyperthyroidism.

The aorta is the largest artery in the cat’s body supplying oxygenated body to the organs. It originates in the left ventricle of the heart, travelling down the abdomen before splitting into the left and right iliac arteries as well as the caudal vein which supplies blood to the back legs and tail. The junction where the aorta splits is known as the aortic bifurcation. A thrombus is a blood clot which is made up of platelets and fibrin, and an embolus is something which travels through a blood vessel until the vessel is too small to let it continue.

Saddle thrombosis is devastating, as there is no warning. The majority of cases are due to an underlying heart condition (usually hypertrophic cardiomyopathy) which in many cases many cat owners and veterinarians are unaware of until aortic thromboembolism occurs. Hyperthyroidism and neoplasia may also cause aortic thromboembolism.

Almost all blood clots form in the left atrium of the heart which may be due to a thickening of the atrium wall can cause blood to pool, leading to the formation of these clots, or increased turbulence. At any time a clot formed in the heart can dislodge and travel along the aorta before becoming wedged in the narrower iliac arteries.

Once blocked, blood can no longer pass into the iliac arteries, which means tissues in the legs are no longer receiving am adequate (or any) oxygen (ischemia), a cascade of biochemical reactions within the cells follow, leading to toxic by-products which ultimately cause cell death. Unfortunately, it doesn’t end there, once the blockage clears, all the toxic by-products which have built up are released back into the circulatory system (reperfusion injury).

Saddle thrombosis can develop in cats of any age or breed; one study found the mean age was 12 years.


Clinical signs will depend on the location of the embolism. Saddle thrombosis is typically identified by the 5 P’s:

Other findings can include:

Your veterinarian will perform a complete physical examination of your cat and obtain a medical history from you. During the exam, he will check for a pulse in the rear limbs which may be faint or may not be there at all. The leg(s) and feet will feel cold to the touch with a blue-tinged skin tone on the paw pads.

If your veterinarian suspects aortic thromboembolism, he will administer strong painkillers quickly as this is an excruciatingly painful condition.

It is important to treat the underlying heart condition once your cat has recovered from saddle thrombosis.

Treatment is often unsuccessful. Blood thinners and thrombolytics run the risk of causing bleeding complications. Even if the cat recovers from the initial event, the risk of another clot forming is extremely high. On top of that is usually an underlying heart condition. Many owners elect to euthanise cats with aortic thromboembolism due to the poor outcome.