The Siamese (and other pointed cats) have a modifier gene that inhibits the development of pigmentation on the fur above 100 – 102 F (37.7 – 38.8). The coat colour genes turn on in cooler parts of the body such as the face, lower limbs and tail, but warmer parts remain pale due to a lack of pigmentation. Siamese kittens are born all white because the warmth of the womb blocks the cat’s colour gene.

The Siamese cat is known for its unique coat colour which consists of dark points on a pale background. This also occurs in other breeds such as the Birman and Ragdoll, and also occurs in rats, mice and rabbits.

Cats have 19 pairs of chromosomes which are located in the nucleus of every cell and make up the blueprint of animals. The chromosomes are made up of genes, which come in pairs, one from each parent. Each gene is responsible for a single feature, or a group of features. One pair of chromosomes determines the cat’s sex, the female has two X chromosomes, and a male will have one X and one Y chromosome.

Siamese cats carry the Himalayan gene, which is a mutation at the C locus (a fixed position on a chromosome where a particular gene is located), causing partial albinism on warmer parts of the body. The gene is recessive to full colour, which means the cat needs two copies of the gene (homozygous) for the Siamese colour to show up.

Mating a Siamese to a Siamese will only ever produce Siamese coloured kittens. If you mate a Siamese to a black cat, you will get black offspring which will carry one dose of the Siamese (cs) gene at the C locus. That is unless the black cat also carries the recessive cs gene, in which case there is a 1 in 4 chance one of the kittens will be born pointed (ie: displaying the Himalayan colouration).

Tyrosine is an enzyme necessary for the production of melanin, the major pigment in the cat’s skin, hair and eyes which gives it its colour. Siamese and other pointed cats have a defective form of tyrosine which does not function at normal body temperature. Genetically, a seal point Siamese is a black cat but due to the tyrosine defect, pigmentation can only appear on areas of the body that are cooler, such as the nose, ears, feet and tail.

You will notice your Siamese get darker in the cooler winter months, especially if your Siamese is an indoor/outdoor cat. Siamese cats are white at birth, due to being in the constant warmth of the mother’s womb. Colouring varies from Siamese to Siamese.

The Burmese share the same type of gene, known as cb.

The cs and cb genes are co-dominant and hence if you mate a Siamese (cs) to a Burmese (cb) you will get a Tonkinese (cs/cb), which has mink colouring. 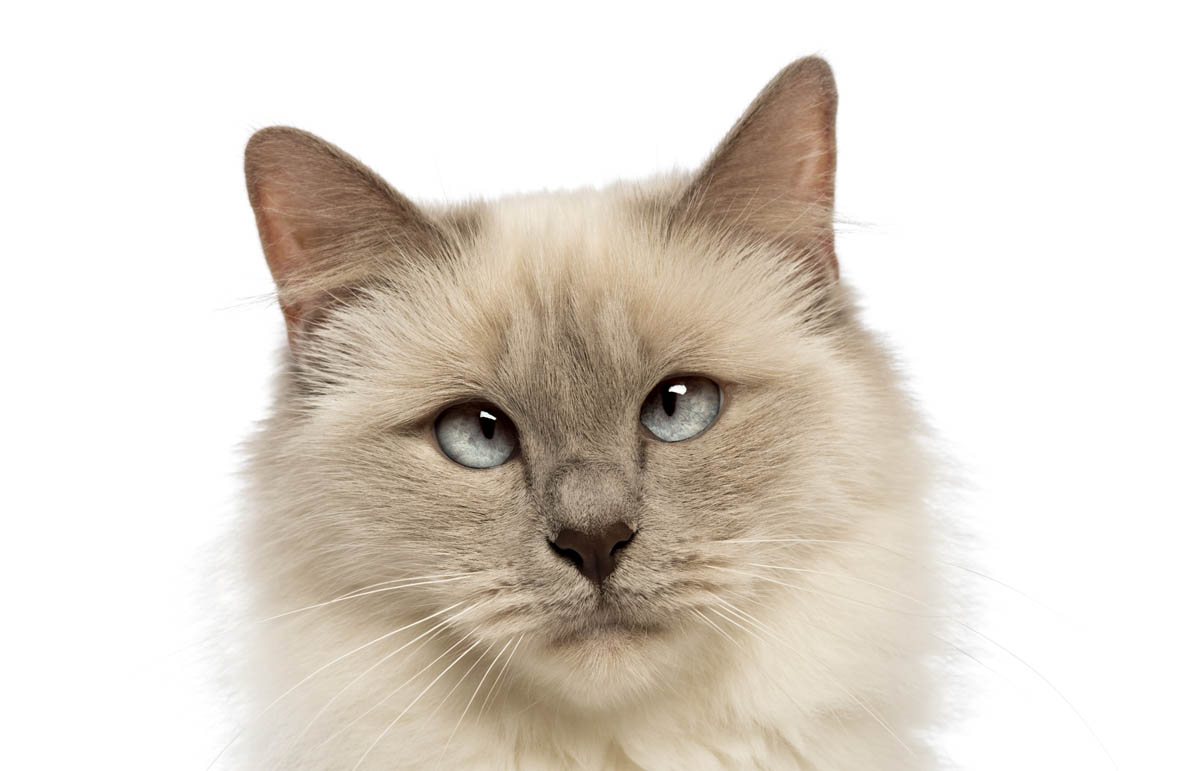 The albino allele (a variant form of a single gene) has another effect on the Siamese cat. Strabismus (crossed eyes) is common in pointed cats. Crossed eyes are thought to be due to a misrouting of the nerve fibres from the eye to the brain. Instead of the fibres splitting left and right, they criss-cross. This condition does not only occur in Siamese cats but other species of true albino animals. Breeders have worked hard to breed this problem out of Siamese cats and it is less common than it once was.

Note how the dd (dilute) gene changes the darker seal and chocolate colours into the paler blue and lilac.

The phenotype is the outward appearance of the cat and the genotype is the internally coded, inherited information. So, while a seal point Siamese carries and displays the seal point colouration, it may also carry the gene for ‘blue point’.

By looking at a cat’s pedigree we will get a good idea of the cat’s genotype. We can also predict what colour kittens will be from a mating between Siamese cats.

We know that Blue Point is dilute of Seal Point and that Lilac Point is dilute of Chocolate. Dilution is recessive to non-dilution and the lowercase letter d represents the dilution gene. The mutant form of dilution is Dm (dilute modifier), which is dominant to the dilute gene. Dm only works where there is already a dilute colour.

Below is a table that shows the effects of the dilute and dilute modifier genes on the dense colours.

The Himalayan gene may have originated in Siamese cats, but once they reached western shores it found its way into the general cat population. That is why you can have breeds and even mixed breeds who have the same colouration as the Siamese. We go into more detail about pointed cats in this article.