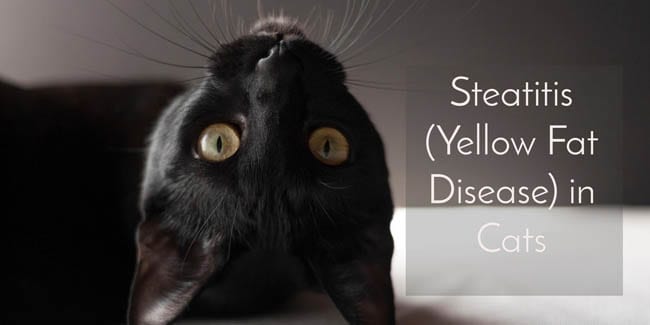 Table of Contents hide
1 At a glance
2 What is steatitis?
3 Symptoms
4 Diagnosis
5 Treatment
6 Can I feed my cat human-grade tuna?
7 What’s the difference between human-grade tuna and tuna flavoured cat food?

Steatitis (yellow fat disease, pansteatitis) is a painful condition characterised by a marked inflammation and yellow colouration of the adipose (fat) tissue. The discolouration of the fatty tissue is caused by deposits of large amounts of ceroid pigment and is caused by feeding a diet high in unsaturated fatty acids and deficient in vitamin E. Oily fish, especially red tuna, but also sardines and white fish are the most common cause of this condition.

Vitamin E acts as an antioxidant and found in foods; these antioxidants inhibit oxidation, which is a reaction that produces unstable chemicals known as free radicals which damage cells.  Unfortunately, tuna is an inadequate source of Vitamin E. Therefore the overabundance of unsaturated fatty acids (which also oxidise and destroy Vitamin E), combined with the deficiency of vitamin E causes damage to body fat, which results in the painful inflammatory response. [1]

Steatitis can occur in cats of any age; however, it is more common in obese cats.

Can I feed my cat human-grade tuna?

The short answer is yes, but only feed as a special treat; it should not be a part of the cat’s ordinary diet.

Tuna can be addictive to cats, and they can quickly develop a taste for tuna and refuse any other foods. The term “tuna junkie” has been used to describe such cats.

Human grade tuna is just that. Tuna flavoured cat food is not 100% tuna and usually contains other meats and nutrients which are necessary for the cat’s diet.

Limit the amount of fish flavoured cat food as hyperthyroidism has been linked to feeding tinned food, particularly fish flavours.

*1 The Cornell Book of Cats.