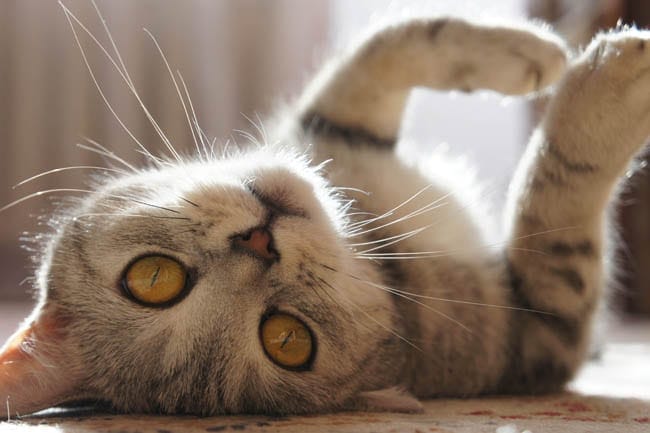 The abdomen is located between the chest and the pelvis and it houses a number of important organs including the liver, spleen, kidneys, stomach, intestines, pancreas and bladder.

Also known as abdominal distension, there are a number of causes of a swollen belly (abdomen) in cats, the swelling may be due to fluid, a tumour, gas, obstruction, worms etc. Depending on the severity of the swelling, breathing may become difficult and you may find your cat becomes lethargic.

Also known as abdominal effusion, ascites (pronounced ass-eye-tees), is a condition in cats characterised by the accumulation of fluid in the abdominal cavity. There are a number of possible causes including liver disease, ruptured bladder, right-sided heart failure, and peritonitis.

Successful treatment relies on treatment of the underlying cause as well as manage symptoms. The initial goal is to make your cat comfortable which can include:

Abdominocentesis – Removal of the fluid within the peritoneal cavity via a catheter, this will help to improve his breathing by reducing pressure on the diaphragm.

Diuretics – Furosemide to promote the production of urine which assists in flushing excess fluids out of the body. Care must be taken when using diuretics as increased urinary excretion can lead to hypokalemia (low blood potassium).

Cushing’s syndrome (hyperadrenocorticism) is an endocrine disorder caused by high levels of cortisol in the body either due to a tumour or medical administration. There are a number of causes which include administration of cortisone, adrenal or pituitary tumours.

If the disease is caused by the use of corticosteroids then the medication will be gradually withdrawn. This needs to be done slowly and carefully to give the adrenal glands the chance to begin functioning properly.

Generally, while drugs have been shown to be effective in dogs, this is generally not the case in cats.

Surgical removal of the adrenal gland(s) (adrenalectomy). If the disease is caused by an adrenal tumour in one gland, then only the affected gland will be removed.

If the disease is caused by a pituitary tumour then both the adrenal glands will be removed. Adrenalectomy is a risky and difficult operation, and once the adrenal glands are removed your cat will have to have replacement therapy with glucocorticoids and mineralocorticoids throughout their lives.

A usually fatal viral infection caused by certain strains of the coronavirus.

FIP is almost always fatal, prednisone may be prescribed along with supportive care.

Food intolerance is an adverse reaction to a food, one of its ingredients or additives. It differs from a food allergy in that there is no immune system involvement.

Avoid the food which caused the intolerances is the best method of treatment. This may either be a homemade diet or a commercial one. If you are feeding a homemade diet it is important to ensure that your cat is receiving the correct nutrients in the diet.

Also referred to as malignant neoplasms or malignant tumours, cancer is the uncontrolled division of cells that normally should be restrictive in their growth. Tumours can be malignant (cancerous) or benign. Certain types of cancer can develop in the abdomen and can cause organ enlargement.

The symptoms of cancer can vary depending on the organ system affected but can include:

A gastrointestinal blockage refers to the blockage anywhere from the stomach (gastro) to the intestines. Thankfully gastrointestinal blockages are less common in cats than they are in dogs, however, they can and do occur. Blockages can develop anywhere in the small or large intestine, it may be partial or complete. If a full blockage occurs, food, water, and gastric juices can build up behind the site of the obstruction and eventually cause a rupture. Causes include hairballs, ingestion of a foreign body, cancer, twisting of the intestine, adhesions and heavy tapeworm infection.

The belly of a pregnant cat will be noticeably larger from the fifth week of pregnancy. Some cats will experience morning sickness in the early weeks and may lose their appetite. The gestation period for a cat is 63-65 days (approximately 9 weeks). This varies between cat though, and anywhere between 60 to 70 days is normal.

The belly will return to its pre-pregnancy size after delivery of the kittens.

Pyometra (pus-filled uterus) is a serious and life-threatening infection associated with a condition known as cystic endometrial hyperplasia (CEH). It used to be thought that female cats were induced ovulators, meaning ovulation occurs when the cat mates, however, it is now believed that the female ovulates spontaneously (without mating) and several ovulations may have occurred without the owner being aware.

Roundworms, hookworms and tapeworms are common parasitic worms which are found in the cat’s gastrointestinal tract and can cause abdominal distention, particularly in kittens or if the worm burden is high.

There are a number of effective anti-parasitic treatments available to kill worms.

Last but not least is weight gain which can be caused by too many calories, inactivity or underlying medical conditions. Middle-aged to senior cats are more prone to weight gain as they become less active.

Symptoms: Weight gain and a decrease in activity. Obese cats will often have difficulty grooming.

Treatment: A veterinary supervised change in diet and increase exercise.

The veterinarian will perform a complete physical examination of your cat and obtain a medical history from you. He will want to know when you first noticed symptoms. He will need to perform some diagnostic tests, some of which may include: