What is the beckoning cat? 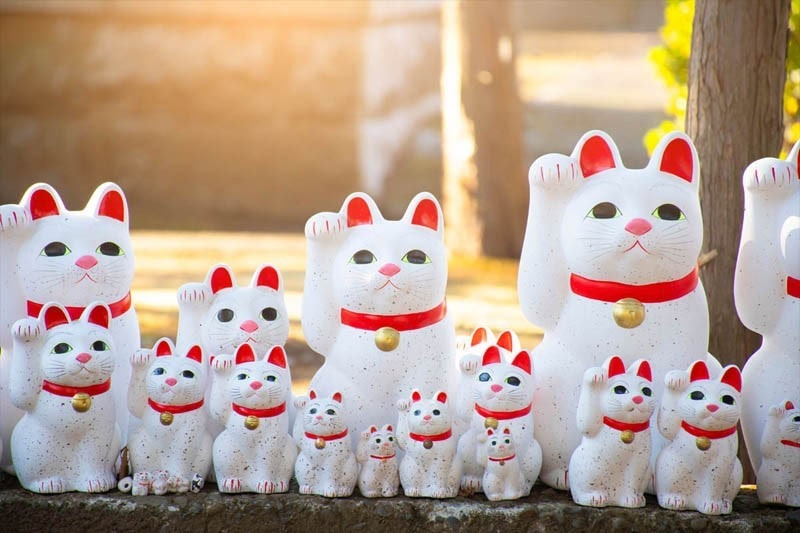 The image of a cat with one or both paws raised is a popular Japanese talisman known as Maneki neko or beckoning cat (招き猫) and is usually made from porcelain, wood or plastic. Its literal translation is ‘invitation cat‘, and it represents good luck and fortune to the owner. Its history dates back to the 17th century in the Edo period (1603 – 1867 or 1868).

While this lucky talisman may have originated in Japan, it has spread across Asia, and is popular in China and is a common sight in the doorway of Asian shops and restaurants.

People leave beckoning cat charms at the temple as a way to say thank you or to pray for their sick cat or success in business.

The monk and the cat

Tama was a Japanese bobtail cat who lived with an impoverished priest (or monk) in a run down temple in Edo (renamed Tokyo in 1868). One day the priest said to the cat ‘If you are grateful to me, bring some fortune to the temple‘.

A short while later Ii Naotaka (1590-1659) the feudal lord of the Hikone castle near Kyoto was returning from hunting (or after the siege and victory at the Osaka castle) and passed the temple with several samurai warriors. They came across Tama who beckoned them with its raised paw to enter the temple where they explained to the priest what they had just witnessed. Once inside, heavy rain forced them to shelter there where the priest served tea and preached Sanzei-inga-no-hou (past, present, future reasoning sermons). Soon after they returned home, Ii Naotaka donated huge rice fields and croplands to re-build the temple into the grand building it is now.

A slight variation is that the lord was taking shelter under a tree opposite the temple entrance during a storm when the cat beckoned him over to the temple. Just as he moved, lightning struck, and the tree exploded. The lord was so grateful that the cat saved his life that he made generous donations to the temple, adopted it as his family temple. It was renamed Gotokuji Temple after Ii Naotakas death.

When the cat died, it was enshrined in a smaller temple (Shobyodo Temple) built in the cat’s honour. The temple, Shobyodo temple (beckoning cat temple) is located in Gotokuji’s grounds. The cat became the god Shobyo Kannon (Goddess of Mercy).

The geisha, her cat and a snake

A geisha by the name of Usugumo had a well-loved cat and one day pulled on her kimono and would not let go. Her companion saw this and cut off the cat’s head with a sword. The head flew into the ceiling, killing a snake which was above the geishas head.

Distraught over the loss of her cat, someone made her a wooden statue of the cat with its paw raised as a symbol of protection.

A slight variation states the woman had an effigy of the cat carved in wood to commemorate its brave act.

The old woman and her cat

A poor elderly woman who lived in Imado, Tokyo had to sell her cat so she could buy some food. The cat later returned in a dream and told her to make its image in clay. Somebody saw the pottery cat and bought it, so she made more cats which she sold and eventually became wealthy.

What does the waving symbolise?

There are several different versions of the maneki neko which have different meanings.

What colour is the maneki neko? 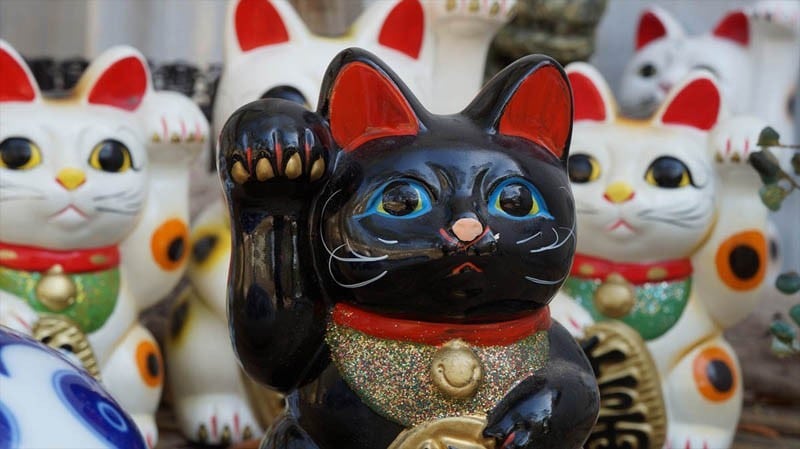 The traditional colour is calico, which consists of a white background with patches of orange and black or tabby. This colour is known as mi-ke, which means three fur. 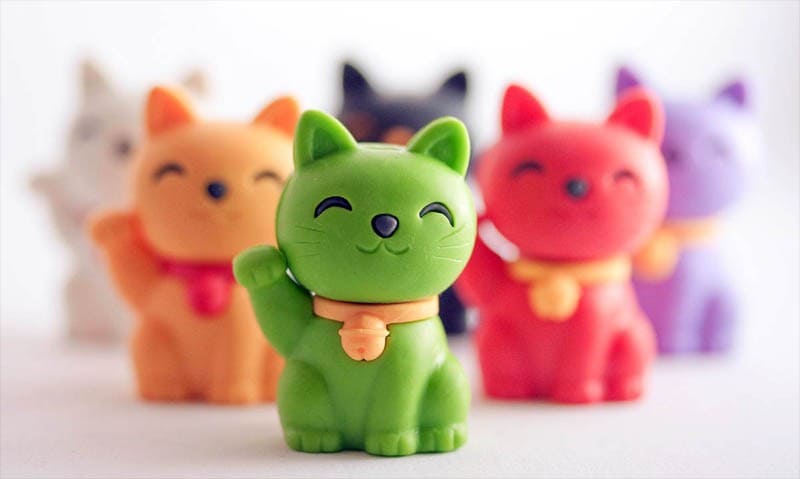 While the traditional maneki neko is white or calico, different colours have different meanings.

What is written on the gold coin the beckoning cat holds? 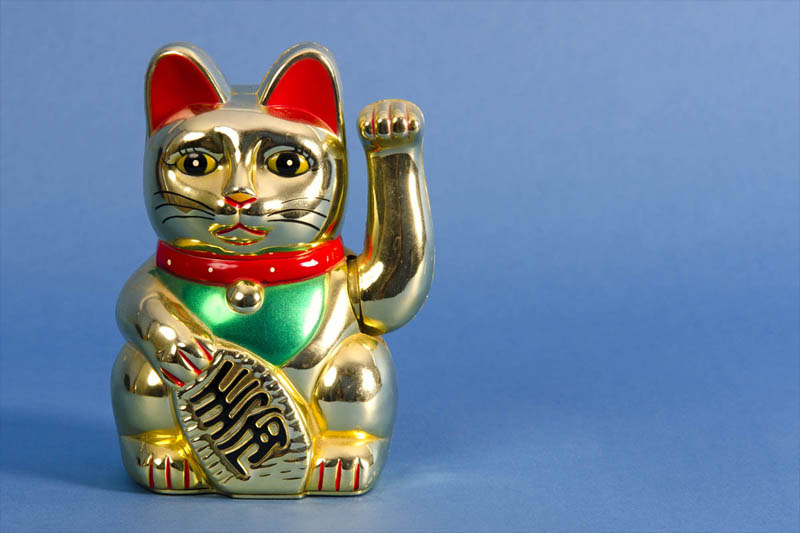 The Japanese writing on the gold coin the beckoning cat holds 千万両 says ‘sen man ryo’, which translates to 10 million ryo. The coin is known as a koban which was a Japanese oval gold coin in the Edo period. 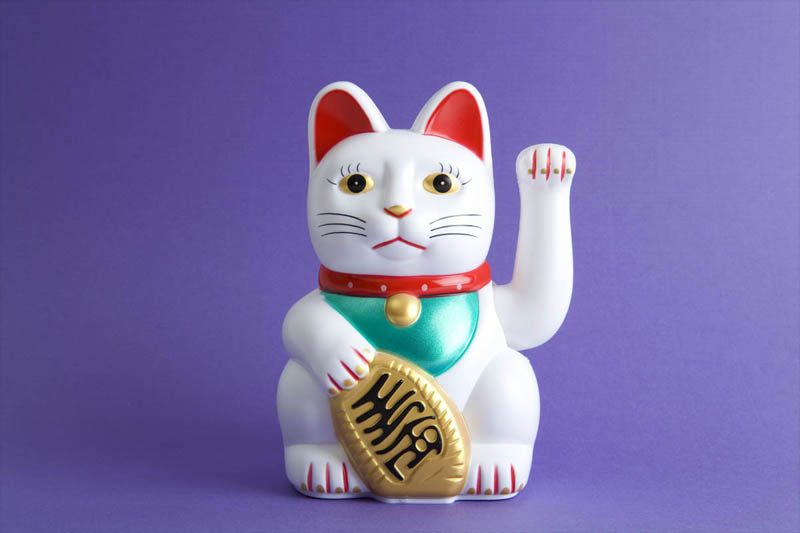 These represent the monk who took special care of his cat.

What breed of cat is the beckoning cat?

What is the beckoning cat called in China?

How do you get to Gotokuji Temple?