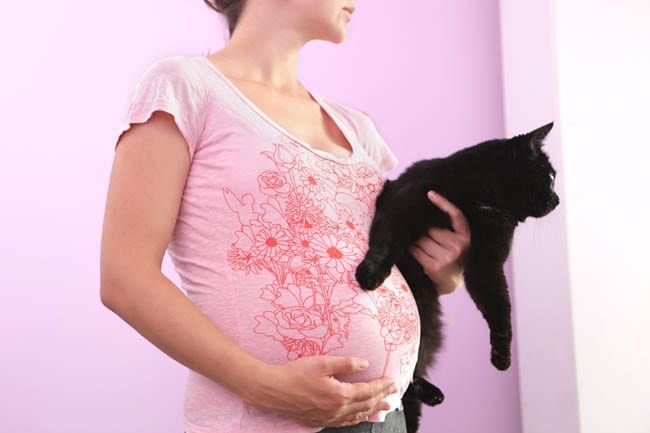 Table of Contents hide
1 What is toxoplasmosis?
2 Symptoms
3 Diagnosis
4 Treatment
5 Diagnosing toxoplasmosis in the fetus
6 How does the fetus become infected and what effect does it have?
7 Toxoplasmosis symptoms in newborns
8 Prevention
9 Should a pregnant woman rehome her cat?
10 What else can I do to avoid toxoplasmosis?

Discovered in 1908, toxoplasmosis is an intracellular parasitic infection caused by the protozoan Toxoplasma gondii. It infects multiple of warm-blooded including humans, livestock, birds etc., however, cats are the definitive hosts to Toxoplasma gondii. This means that the parasite is only able to sexually reproduce in cats, both wild and domesticated species. Most people have heard of toxoplasmosis due to the risks infections pose to pregnant women. If infection occurs during pregnancy it can cause abortion and congenital defects to the fetus. Toxoplasmosis infection in humans is extremely common with between 30 – 50% of the population having been exposed. [1]

Most healthy adults are asymptomatic, that is they don’t have any symptoms, others have only mild symptoms such as:

Severe toxoplasmosis in humans can sometimes occur and cause damage to the eyes, brain, and other organs. This is more likely to happen in immunocompromised individuals such as people with HIV, organ transplant recipients and patients undergoing some forms of chemotherapy.

Serologic testing to look for IgG and IgM antibodies in the blood.

If a pregnant woman is diagnosed with toxoplasmosis, she will be treated with antibiotics to help prevent transmission to the fetus.  The earlier treatment starts the better.

If upon testing the fetus is shown to be infected also, two types of antibiotics will be prescribed.

Diagnosing toxoplasmosis in the fetus

How does the fetus become infected and what effect does it have?

Many infants display no symptoms at birth (subclinical infection) but may develop disabilities later in life. This includes:

Treat infants with congenital toxoplasmosis with antibiotics for the first year and carefully monitor past infancy.

Cats aren’t the only source of infection to humans, people can also become infected via improperly cooked meat, improperly washed vegetables, drinking untreated water (from a stream or river for example) and gardening.

No, this isn’t necessary, however, it is recommended you request a blood test to determine if you have been exposed in the past. This means your immune system has already built up a resistance, therefore, you are very unlikely to become re-infected.

What else can I do to avoid toxoplasmosis?

If you are planning to become pregnant, ask your doctor for a blood test to look for antibodies to toxoplasmosis.  Seek medical advice immediately if you are already pregnant and think you have been exposed.